Theater: a wild and wonderful awakening coming this spring 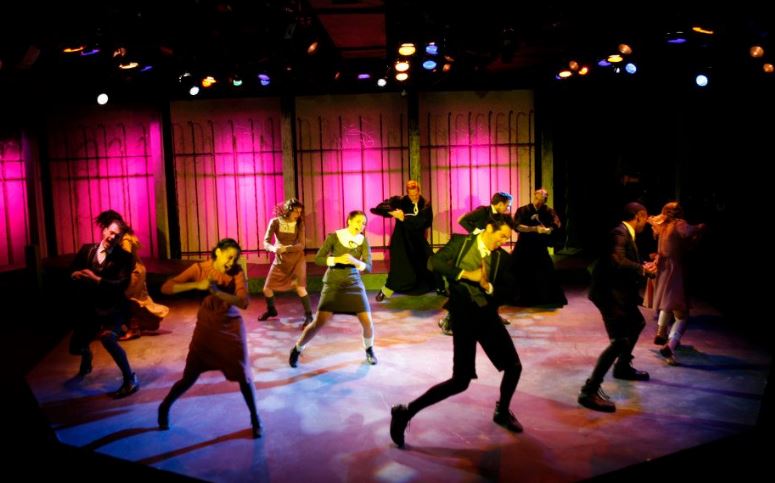 This year’s ARHS spring musical, “Spring Awakening,” is sure to excite, delight, and challenge audiences.

It is an “angsty rock musical adaption of the seminal play about the trials and tribulations of growing up” according to the site Music Theater International.

Set in the early 20th century in Germany, these teens explore their sexuality and expose the rift that grows between parents and children.

The play is based on the 1891 German play Frulings Erwachen (translated in English to “spring awakening”) written by Frank Wederkind, that criticizes the sexually oppressive culture of the early nineteenth century.

Due to its sensitive subject matter, the musical has often been banned or censored.

On November 8, students gathered in the auditorium to hear the annual announcement of what this year’s musical would be.

When the title “Spring Awakening” was announced, it was met with cheers and questions. “How are we going to do this in a high school?”

Given the content of the musical and the backlash it has been met with in other schools (it’s even the subject of a television show called “Rise,” exploring a fictional backlash), it’s understandable that Performing Arts Department Head John Bechtold announced the musical so early.

His goal was to elicit dialogue about the sensitive content of the show.

By December 9, students had gathered again for a meeting about auditions on Dec 15 and 16.

Bechtold talked briefly about how the subject matter of this show had been met by the community, which is to say, positively for the most part.

The theater department is still taking precautions to ensure the safety and happiness of the students participating in the production.

Students wishing to perform need a parent’s written note stating that they understand their child is participating.

Bechtold is also enlisting the help of Special Education teacher Emily Pritchard as Assistant Director for the first time, and BRYT (Bridges for Resilient Youth in Transition) Coordinator Karen Peters, will offer guidance in supporting students who take part in or watch the musical.

Reactions to the announcement

Bechtold talked about what feedback he received after announcing the musical.

“I was expecting support [when I announced the show],” he said.

“We talked about a validating space.  There was a reflexive pushback about whether it was appropriate to put student actors in the show, and if audiences would accept–but so far there has been very little of that.”

He said that any time you define a show by its most challenging parts, you are losing a piece of the whole.

“The feedback I did receive was entirely about the challenging content,” he admitted. “But people weren’t against it. They were interested in the context [of the show] and how it would be presented.”

“I haven’t heard a lot anticipating concern about [sexual] content, and I think that we have a supportive community and school culture,” she said. “The school has worked hard to build non-academic conversations about topics like sex and sexuality and mental health.”

Serik White, a senior, said they are glad the play is focused on “teenagers and the experimentation that they are partaking in.”

When asked if they were going to audition this year, they said, “Yes, I’m auditioning. The music is pretty good, and I like acting.”

When asked what went into choosing this year’s musical, Bechtold answered, “There was not one reason. I wanted a show that pivoted from last year’s [“Laramie Project”]. I wanted a different mindset.”

He admitted that Laramie helped with “making difficult work and having a community that builds” on it.

“There is an interest in how students experience the world outside of school [that is explored in this show],” he said. “Plus it’s a fun show with a big cast, which gives opportunities to lots of people who want to get involved.”

Any student can join the musical; even if they wish to be in the ensemble and don’t want to audition, they  can just show up to the first rehearsal on January 6.

What can one expect from this year’s musical?

“I hope it is an enjoyable project, with lots of students and staff collaboration,” said Bechtold.

He is particularly interested in validating experiences of teens.

For Pritchard, this is her first year directly involved with the school musical, and as Assistant Director. She says she’s “there to give support.”

Both Bechtold and Pritchard have emphasized that a fun musical’s strength is in the ensemble; it gives many students a chance to do theater and potential to create a whole that is greater than the sum of its parts.

That will be particularly strong this year, as it’s about high schoolers and students can own the story.

Pritchard hopes that the Amherst community will “trust students to tell their [theatrical] stories” and that they will all  “have fun!”