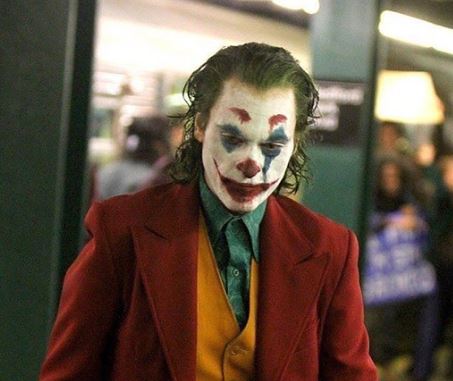 The Joker is not just an iconic comic book villain from the DC universe, and Batman’s biggest rival, he’s also a movie franchise.

The white-faced clown with an oversized red smile on his face and wild green hair has made another riveting appearance, in the newest movie, “Joker,” released on October 4, 2019, featuring Joaquin Phoenix, but this time with fewer smiles and jokes.

The actor stands out from past Jokers, in looks and story. While he has kept some of the signature characteristics, like his face makeup and green hair, this time he wears an orange vest and a green button up shirt inside, topped off with a red suit.

The story focuses on the depressing backstory of Gotham City’s famous villain, a man named Arthur Fleck working as a party clown and an aspiring stand-up comic, who has a laughing disorder that causes him to laugh wildly and inappropriately and requires medication and treatment.

Abuse he faced in childhood and his continuing victimization as an adult leads him to act out criminally and to commit a slew of violent murders.  Phoenix realistically and dramatically displays the mental illness and suffering of Joker.

The movie’s new twist on the Joker story has been a major success in the Box Office, according to an article written from the BBC. In late December, the film was the tenth-highest grossing at the box office, with Frozen, Knives Out, Ford v Ferrari, and Queen and Slim leading the crowd, and it has grossed $737 million globally so far.

Many teenagers don’t know or remember the tragic history behind contemporary Joker movies. The last Joker-centered film was “The Dark Knight” in 2008, starring Heath Ledger, who committed suicide after he completed filming the movie. In 2012, “The Dark Knight Rises,” did not feature a Joker, out of respect for Ledger’s memory.

Nevertheless, on July 20, 2012, a mass shooter named James Holmes, dressed as the Joker and clad  in full body armor, opened fire during a screening of The Dark Knight Rises in Aurora, Colorado, murdering 12 people and injuring 70.

The Cinemark theater where this shooting took place did not screen this year’s new “Joker” film; instead family members asking Warner Bros. studio to donate money to groups that aid victims of gun violence.

Despite the film’s controversy, those who did go to see “Joker” had a lot of conversations about its mood and tone, and were eager to compare Phoenix’s Joker to those of the past.

Music teacher Benjamin Peterson had lots to say. “The movie was very disturbing, showing a lot of his mental illness,” he said. “The part where he murdered his own mother was really uncomfortable to watch.”

Peterson mentioned that though the movie was filmed in New York, the whole setting was rugged and old, more of a rainy, dark city than a modern city, in keeping with the film’s mood.

Taylen Pope and Danny Molina also saw the film. “The whole movie was really good to watch, to see how the characters developed,” said Molina. “My favorite scene was the one at the end of the riot because it was cool how he had so much power in Gotham.”

Taylen Pope also had a lot of thoughts about the movie.

“I really liked the movie,” he said. “My favorite scene was when the joker was in the subway and three bullies beat him up. Or that really awkward part where Arthur was on stage for a stand up comedy show but the only person laughing at the jokes was himself.” He also thought Phoenix was “the second best Joker ever.”

“I like how he really portrayed the mental aspect of it,” said Pope. “It showed how society can change a person if they aren’t treated right.”