If these walls could talk: arhs._memes page full of commentary, humor 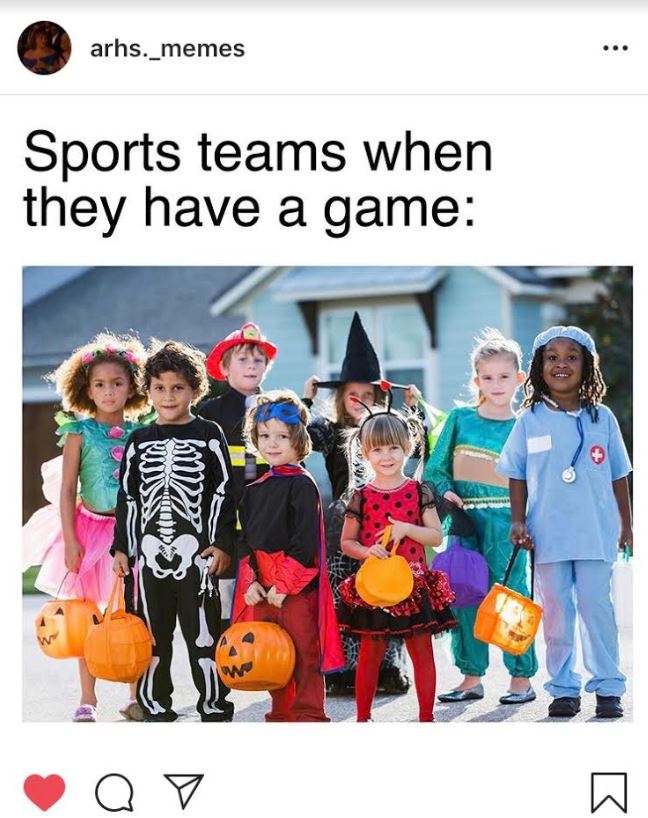 A meme from the arhs._memes page.

In October 2018, a meme page was created on Instagram that took the ARHS community by storm. A storm of laughter, of course.

(For those who still don’t know what a meme is, the Oxford Dictionary refers to a meme as “a humorous image, video, or piece of text, that is copied, often with slight variations, and spread rapidly by Internet users.”)

arhs._memes is a relatively new account, run by students who remain anonymous to most, focused on making memes about our community. With a little over 500 followers, they post memes about teachers, school climate, and most notably student opinion.

When asked why they created arhs_memes, the account administrators said, “It was our duty to the school to make the account.”

So what leads someone to create a meme account about their school? arhs._memes recalled, “There was one night where we all made memes about Mr Lariviere and then suddenly we were just like ‘Let’s make an account.’ We sort of aspire to be Mr. Lariviere, so it was definitely a ‘go hard or go home’ kinda moment.”

The purpose of the page seems obvious to most, but when asked they said the expected: “to make memes.”

“We just want to have a good time,” they said. “We also thought that Student Union wasn’t doing enough to change the climate so we just wanted to stir the pot.”

They don’t post anything that has other students in it, and most importantly, if it isn’t funny, they won’t post it. “Check the bio,” they said. “We’ve got a reputation to uphold.”

Regarding their anonymity, arhs._memes said, “We don’t want to get beat up – we’ve said too many things about the football team and they’re bigger than us.”

In all seriousness, their only beef with the football team is a worry that other sports are undermined if one gets too much attention.

“We respect that they’ve had a successful season but we feel like that should not undermine the success of other sports seasons – there should be equal emphasis on volleyball, cross country, field hockey etc. You can’t get salty at the facts.”

“We have tried to point out inequality at our school because we have a platform,” they wrote, “But at the end of the day [all our memes are] a joke.”

Asked why they remain anonymous, they said, “We want our  image to be separate from the memes, so people are solely focused on the content.”

They said staying anonymous allows them to post “unbiased humor everyone can relate to” and to avoid “awkwardness when we don’t post someone’s meme.”

arhs._memes doesn’t know how they are going to pass down the account after their graduation. “We don’t know yet because there aren’t that many people that we can trust to keep up our standards,” they said. “The [ideal account administrator] would have boundaries while creating relatively PG content that’s still funny.”

arhs._memes hopes their content leads to open dialogue between groups of students at the school about events and ideas that nobody else wants to talk about.

“It shows the good side of social media,” they said. “It’s a fun little community thing, because the school can get divided really easily. It’s nice that everyone can relate to such a simple thing like a meme.”

arhs._memes decided to create memes as opposed to any other sort of content because “it’s funny” and they think it’s better than “the teacher quotes” instagram page, than kindness, or “the Naysh” combined.

“We’re here to have a good time,” they said. “And the only reason I go to class is so I can make a meme about it.”

arhs._memes loves all of its content but one of their favorites was “ARHS as vines.”

In this post, they posted a bunch of vines and related them to teachers and classes at the school. This post did extremely well with 190 likes and 16 comments praising the post.

Another post they favor is the “ARHS at the top of the stairs” meme, joking about how winded people get climbing the stairs to the second and third floor at ARHS.

“This was our most relatable meme by far,” they said. “I don’t care if you play football, play Ultimate, or you’re Sophia Jacobs-Townsley. EVERYBODY is winded at the top of those stairs.”

One post that arhs._memes thought should have been more successful is the “Ms. Custard at the Grammys trio. You see her at the Grammys, and then she doesn’t win a Grammy and you’re like ‘What?’ And then she DOES win a Grammy. Like what is this emotional rollercoaster?” they joked.

When recalling their righteous moments, arhs._memes said, “ Back when we had 420 followers and 69 following, man.” They asked if 75 people could “unfollow us so we’re back?”

So what do members of the ARHS community think about arhs_memes? Yebon Yun said, “It’s really cool because it’s only stuff that ARHS students can understand, so it makes it more exclusive.”

“It may get a little personal sometimes but people shouldn’t get heated because at the end of the day it’s a joke,” said Yun.

Jesse Barker-Plotkin was not as fond of the account.

“This is a threat to national security,” he said. “ I also think it should be closed on Sundays, snow days, and national holidays. At this point, there’s no stopping it because it seems to have a mind of its own.”

arhs._memes wanted to make some closing remarks. “Rest in peace to our man Mark, forever our guide,” they said. “Also can people send us more memes?”