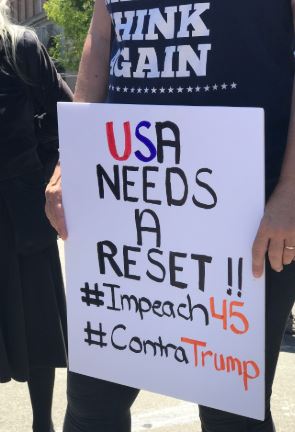 Protestors have taken to the streets to support the impeachment of 45th president Donald Trump.Photo: Wikimedia Commons

A memo later released by the White House hinted at a “favor” Trump had asked of Zelensky during this phone call, and an anonymous whistleblower complaint was filed in August accusing Trump of abusing his power to dig up dirt on his political competition ahead of the 2020 election.

According to the complaint and a full transcript of the phone call, Trump had asked Zelensky to investigate the business practices of 2020 Democratic candidate former Vice President Joe Biden’s son Hunter when he worked as a board member for Ukrainian oil and gas company Burisma.

Following the release of the whistleblower complaint, House Speaker Nancy Pelosi announced on September 24 that the House was beginning a formal impeachment inquiry of President Trump.

News this big was sure to garner a variety of reactions from the ARHS community.

Social studies teacher Tom Fricke is teaching a Constitutional Law elective this fall, just one place where students have the opportunity to inquire critically about this complex process.

“What Constitutional Law scholars are saying is that people should understand that impeachment isn’t a tool for removing criminals or convicting people of crimes,” he said. It’s a political power of oversight that lets Congress say what constitutes being unfit for office,” said Fricke.

“When there’s suspicion that somebody is unfit for office, step one is investigating. That’s all anybody is doing now. We’re a long way from a possible removal from office,” he added.

With the Constitutional trappings of impeachment made clear and a reality check on the likelihood of Trump’s removal from office, The Graphic was eager to learn what the ARHS community had to say about what had been unfolding in the past few weeks’ news coverage.

“So [the whistleblower] saw something that compromised maybe not quite national security, but certainly the integrity of the presidency,” said senior Eli Slovin. “I think that by reporting what they saw, they were doing their job and doing the right thing.”

Senior Jack Nagy believed that Trump’s alleged actions were reprehensible, but didn’t want to speak too soon as to whether or not he really had asked Zelensky to investigate Hunter Biden.

“If these allegations are true, I do think impeachment is the right thing,” said Nagy.

“Because you can’t be, like, abusing the office for your own gain,” he said. “But there needs to be due process. It needs to be proven that that is what he did. It can’t just be allegations.”

When asked for her opinion on the validity of the impeachment inquiry, senior Fiona McHale, a senior currently enrolled in Fricke’s Con Law class, was passionate and unyielding in her assertion that Trump had broken the law.

“Personally, I believe this is grounds for impeachment, because it directly violates the Constitution,” said McHale.

“Because of the way the Federal Exchange Commission’s laws work, which has to do with elections,” she said, “You can’t have any outside help. Asking a foreign leader to investigate people with ties to your competition is outside help. There’s no gray area in the FEC’s laws.”

“I don’t think it’s necessarily his conversation with the Ukrainian president that was that bad,” said McMahan. “I think it was the conversation he had with Putin after.”

“I’m more interested in that and what it meant. Like, six minutes after his conversation with the Ukrainian president Volodymyr Zelensky, he called Vladimir Putin. And there’s some stuff that was brought up in that call that we don’t know yet. It hasn’t been made public,” she said.

Fricke was quick to clarify that no matter how the process plays out, it must adhere to a strict protocol.

“I think pretty much everybody agrees that the Constitution gives the House the power to investigate and then present charges to the Senate,” said Fricke.

“But the chances of our current senate ever removing Trump from office are slim to none,” he added. “Unless there are sixty six votes in the senate for removing Trump, all of this is irrelevant.”

Though there was a common sentiment shared by students that these allegations would be valid grounds for impeachment, many shared Fricke’s belief that a full-blown removal from office was still pretty unlikely.

“I think it’s really cool that steps are being taken to impeach him,” said senior Sora Green. “But I still think it’s actually really unrealistic that he will get fully impeached.”

However, Green did believe that impeachment proceedings are “steps” that make his reelection less likely.