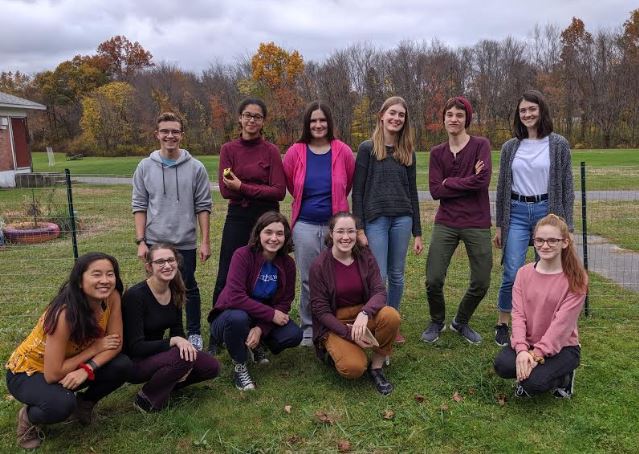 Have you ever wanted to join a writing club? Or work with a group of students who enjoy discussing literature?

Two clubs at Amherst Regional High School,  The Minks literary magazine and the Literary Club, have joined forces to make that space a reality.

Since the two clubs merged at the end of last year, the ARHS Literary Club now focuses on reading fiction, collaborative writing, and producing the annual Minks literary magazine, which comes out in the spring.

The club leadership is comprised of seniors Amina Mednicoff-Misra and Anu Sitaraman, who co-founded the Literary Club last year, and junior Madeline Clarkewright, who produced The Minks.

The club is open to any student who is interested and hopes to have something for everyone.

“The activities vary,” said Sitaraman. “We kind of have three aspects to the club, so one aspect is reading and just talking about [literature] for fun; we have a writing component where we do prompts, and we’re hoping to have writing workshops where we bring people in to talk about writing.”

The third component is The Minks.

“We’re going to read some submissions in the club, then we will decide what goes into the magazine at the end of the year,” said Clarkewright.

“If someone’s interested in both of these things, they don’t have to be in two different places; they can just come to one place,” said Despres.

“It also allows us to reach out and raise some funds and create opportunities for students that we haven’t been able to do in the past.”

Students interested in submitting original pieces of short fiction, poetry, and visual art can submit it to minks@arps.org.

Each magazine is roughly 60 pages long, filled with poems, stories, personal essays, and visual art of all lengths and genres.