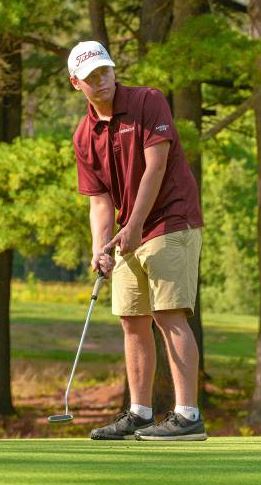 The Amherst boys’ golf team believes they have a shot at qualifying for States and maybe even winning Western Mass this season, a goal that all current members remember seeming very far-fetched in seasons past. With an outstanding record of 13-1 and a crucial win against long-time rival South Hadley, the team is looking to continue this momentum throughout the rest of the season.

Standout athletes on the team this year include senior Evan Rutherford, senior Eli Kayser-Hirsh, and eighth grader Piet Hartman, all of whom expressed enthusiastic remarks about the promising start to the season.

“We’re really good,” said Rutherford. “We’ve been good in years past but have always run into a team better than us. This year, in 14 matches, we have only been outmatched once.”

Similarly, Hartman commented about the unprecedented start to the season this year. “Thirteen-1 start is the best start the school has ever had. We are strong as we have ever been, so we are all looking forward to see how far we can go in the playoffs,” said Hartman.

The team is guided by strong and experienced leadership in co-captains Kayser-Hirsh and Rutherford. They serve as examples for the rest of the team, role models for younger players, and messengers of information.

“Most of the kids that play are really young. As a captain, I just try to keep the kids in line,” joked Kayser-Hirsh.

A collective team highlight from the season so far was their match against South Hadley, another highly skilled team in Western Mass. who has always defeated Amherst in the past.

“We just beat South Hadley yesterday who we had never beat while I was here,” said Kayser-Hirsh. “That was pretty awesome.”

At practice, they spend the first 20 or 30 minutes working on a specific skill, such as putting or certain irons. Then they go out and play in small groups, with assistance and instruction from the coach, Carl Vigeland.

“[Vigeland] will go along with us and give us advice. Not necessarily about our swing, but how to manage and play the course,” Hartman said.

The team has reflected on last season knows what they need to do differently this postseason to achieve the results they want. “Our weakness was that we were so young and most of the team was seriously unprepared for Western Mass, which is 18 holes instead of the normal nine,” said Rutherford.

But with all their logged wins this season, the team feels more prepared than ever to achieve their big goals and head into the postseason.