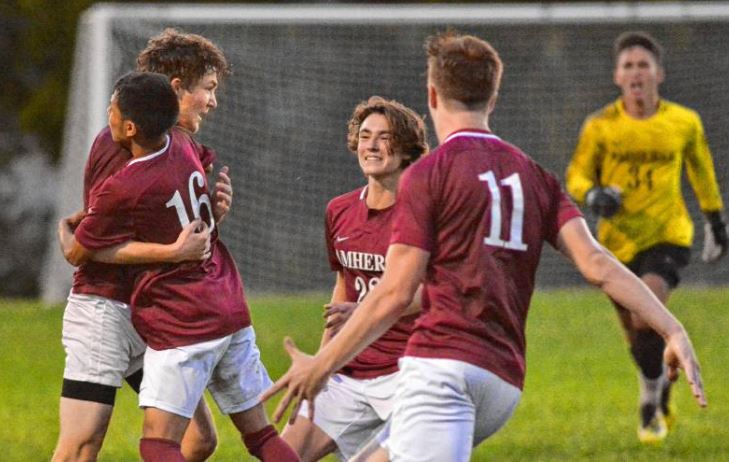 For the ARHS boys’ varsity soccer team, the difference between the 2018 and 2019 seasons has amounted to a complete 180 degree turn.

The crowds are back, “The Naysh” is alive, and the boys are winning.  A lot.

In 2018, the team went 8-8 and right now they’re striving for success and sitting comfortably at 10-4-3 overall and though they’ve stumbled as of late, the ‘Canes are working to remain focused.

With the team’s captain’s comprised of three seniors–Liam Carpenter-Shulman, Brayan Rivas-Martinez, and Lucas Morales-Fernandez–culture has played a crucial role in the success of this years’ squad up to this point.

“We just have a great time together,” said Carpenter-Shulman. “It inspires us to work harder.”

In addition to the strong culture surrounding the team, the 2019 edition of the team is a skilled group of players as well. “We have a really talented team this year,” said Carpenter-Shulman.

That talent runs to both ends of the field.

“Evan [Perry] has really held it down in the backfield making me feel comfortable in net,” said goalie Morales-Fernandez.

The production they’ve seen is on the back end too.  A couple of crucial juniors including, “Zack [Watson-Stevens] and Evan [Perry], have been crucial players,” said senior Dylan Robson. “The production from those two is something that has really made a difference throughout the season.”

The overall experience for the group  itself seems to be one that has led to a strong connection within the team. “Everyone gets along really well,” said Rivas-Martinez. “We’ve created an environment of positive vibes.”

The team’s overall connectedness is evident in their exciting on-field performance and their support of other programs.

“This community is truly something special right now, especially with how all the other sports teams are doing:  football, volleyball, field hockey,” said Carpenter-Shulman. “It’s just amazing right now, to be a part of ‘Canes Naysh.’”

If you go to an athletic event that doesn’t conflict with a soccer game, the soccer team is usually there, cheering on their fellow student-athletes, something that is crucial when building a community around sports.

“It has really been a great vibe this fall season, for all of Canes sports. Every team seems to be finding success and it’s been awesome to be a part of,” said Morales-Fernandez.

The success of the Canes has led to some pretty high expectations within the program in regards to how they expect their season to end.

“We’ve definitely got that championship mentality with this group, we’ve been competitive, and we’ll continue to be,” said Carpenter-Shulman.

Morales-Fernandez agreed. “Once we get back to the grind we had going at the beginning of the year, we’ll be in good shape.”