By Julia Feldman and Graphic Staff 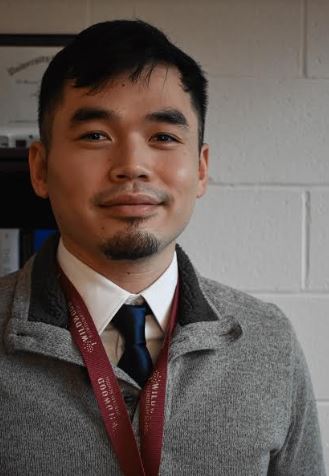 Phila Son is pumped to work at his alma mater.Photo: Sophie Schreyer

ARHS grad Phila Son decided to come back to the high school–to work. He was hired this summer as one of the school’s new adjustment counselors.

“I decided I wanted to be a school counselor five years ago,” he said.

He worked at Wildwood for three or four years while going to graduate school for his master’s in school counseling.

“An opening happened at the high school, I applied, and I got it,” he said.

Son is excited to “work in the community where I grew up.”

He said he wanted to become a counselor because he “dealt with my own issues.”

“It took me a while to figure out how to manage and work through problems in life, and I wanted to pass on my coping skills,” said Son.

“Society needs to get over the image that you’re a crazy person for needing help. Everybody needs help sometimes. It’s more crazy not to seek out help than to get it. If you have a wound, treat it, or it gets worse,” he added.

When not working, Son has been some great places, including Vietnam, Hawaii, Montreal, Canada, London, Chicago, New York, Las Vegas, Florida, and Georgia.

When at home, he loves watching The Office, Parks and Rec, and The Lion King.

A world of Phila Son clones would be “chill, laid back, open-minded, goofy, and silly,” and would “stay calm in very stressful situations.”

If he could do anything he’d go to Hawaii with his fiance. And one thing he said will “never go out of style” is a tailored suit.