Amherst Block Party draws large crowds, fun had by all 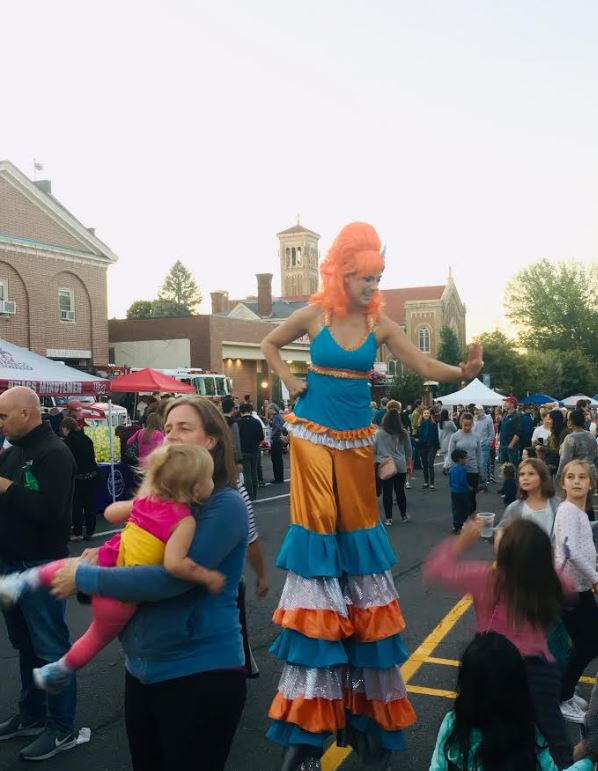 Throngs of people at this year’s Block Party.Photo: Sara Barber-Just

The smell of different restaurants and the sound of dance music combined to fill the air above East Pleasant Street in downtown Amherst. People of all ages walked around, little kids most entranced by performers on stilts, while the Amherst businesses all called attention to themselves. Maybe they were even offering some swag.

Whether you came with friends or were just drawn in by the fanfare, there was something for everyone at Amherst’s eighth annual Block Party.

The all-town get together, known formally as the “Celebrate Amherst Block Party,” is put on by the Amherst Business Improvement District (BID) the second Thursday in September every year. This year, it happened on the evening of September 19.

Sofia McNerney, an ARHS senior, said the Block Party has become a welcome tradition.  “I started going to Amherst Regional High School, and my friends went [to the Block Party], so I decided to go,” said McNerney. “There seems to be a big age range, which is pretty cool.”

For junior Aiya Thomson, though the food is a big draw, the best part  was “probably watching sevvies” or seventh graders “trying to sing karaoke.” Thomson said she first got word of the block party the first year she went to Amherst schools because her friends told her about it.

Thomson she doesn’t “really notice other people” when she’s there because she’s more focused on doing fun activities with friends.

Using music and entertainment to appeal to many generations helps fulfill part of the BID’s mission statement to “enhance the sense of community through collaborations and create a special destination with entertainment experiences that appeal to multigenerational audiences.” Tweedy said she thinks the Business Improvement District does this well.

Mark Lattanzi, the Radio and Digital Marketing Consultant for WRSI Radio Group, which owns The River and Hits 94.3 and sponsors the event, agrees.

“It’s a great opportunity to put ourselves in front of thousands of happy people partying in the street,” said Lattanzi.

The Block Party is bookended by music from these two stations, with Hits pumping at the entrance near Subway and The River with a live music stage located near Kendrick Park.

“As local radio stations, it’s important to participate in the community and remind people that we have great stations that bring music to them on the air, online and in person at events like the Amherst Block Party.”

Sarah Van Horn, an ARHS junior, appreciates the Block Party because it’s inviting to a large range of people. She sees the block party as different from other events hosted in town.

“It’s not “calling to diversity specifically and it’s not represented as any social justice issue,” said Van Horn. “[It creates] an open environment that just lets people have a good time.”

After eight years, and with some success, the organizers and attendees of the Block Party hope that it continues to evolve.

“More food? I like food,” said Thomson. “And bring back karaoke! It was super fun.”

“I think it will continue to grow and attract more Amherst community groups, visitors, and hopefully more amazing local sponsors,” said Tweedy. “It’s a great event for folks to enjoy and discover downtown and learn about upcoming programs, initiatives and events and meet some of their elected officials too!”