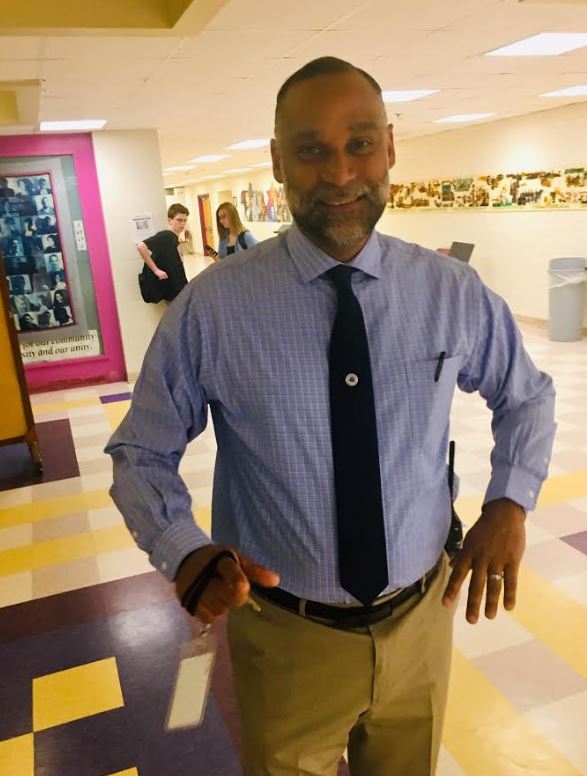 ARHS has a new face attached to its restorative justice program, Pedro Mendez, whom you might have seen greeting students at the door in the morning, along with Stephen Bechtold.  Mr. Mendez was hired to fill in for DW McCraven during a medical leave.

Mr. Mendez was first involved in law enforcement then moved on to school culture and climate. “I evolved in to this position over the course of time,” said Mr. Mendez.

Mendez said that restorative justice, like therapy, has at its heart, “the goal of resolving problems through dialogue and activity,” and  it effectively reduces conflict.

This kind of problem-solving can also lessen the likelihood of student suspensions.

He has lived in the area and implemented RJ in many different areas.

Previous to working at ARHS, he was a Psychiatric Counselor at Cooley Dickinson Hospital, where, according to his LinkedIn profile, he treated patients, with a wide range of mental health issues such depression, anxiety, eating disorders and anger management difficulties.”

He has a bachelor’s degree in law enforcement, a masters in forensic psychology, and a second masters in counseling. At the moment he is a licensed social worker and is also completing his clinical hours to have an independent license.

One of the best things about RJ, he said, is that people acting out are oftening asking for help. “The purpose of the RJ practice is to validate the person’s pain, give them a voice and allow the offending party to make amends,” said Mr. Mendez.

He talked about the difference between restorative justice and social justice practices and why he prefers RJ, which he says is more about getting to the root of the problem.

The world of therapy helped him “to see what’s going on with a person” he’s working with in their life and to find ways can he support them. “RJ also gives people a place to be heard and helps us to repair different relationships,” he said.

He seems to love his field and called it wonderful, noting it can be done in “any community.”

Mr. Mendez said RJ has some core principles such as “silence, active listening, body language, understanding when to challenge a thought, when to challenge an emotion, or when to validate a situation.” Once people are skilled at those, “everything falls into restoring the connection between two parties,” he said.

He enjoys teaching the RJ process to kids and wants continue giving students the tools they need to succeed in life.

One thing he’s taken away from RJ is learning a lot about himself. “I’ve learned that I can do anything if I put my mind to it,” he said.