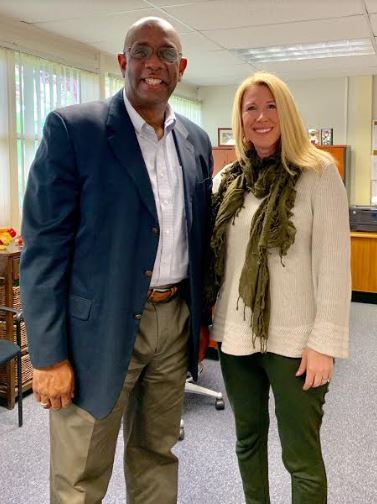 Mr. Jones was born and raised in Virginia, in a “multi-generational house.” His close-knit family emphasized supporting each other.

“My great grandmother, my grandparents, my mother, my brother, and my twin uncles [were all there],” he said. “Education was very important.”

Mr. Jones attended a Catholic grade and high school and after college, went into teaching.

He started as a social studies teacher, a basketball coach and track coach, and a class advisor.

He then moved up the ranks at different schools, becoming a dean, then assistant principal, then principal, and finally an executive principal, where he led other principals.

He has taught in mostly urban schools, in large cities, “with kids from pretty tough neighborhoods.”

Mr. Jones achieved many accomplishments as a principal in Virginia.

One of his schools was named top 100 in the nation and had one of the top 50 guidance departments in the country.

Another school had “the highest GPA for student athletes for three years and a graduation rate of 85%. We had one of the top programs in the country for getting kids to college,” he said.

Other achievements include creating and facilitating a mechatronics proram, which gave students access to 3D printers.

But he said the greatest moments were when he helped others.

“There was a young man who came in to our school as junior with a 1.7  GPA,” he said. “He graduated the next year with a 2.7 GPA. He went on to play football for Penn State, to graduate, and to be recently drafted for the Philadelphia Eagles.”

Mr. Jones said that “his mom called a week ago to say ‘Thank you,’ and I said ‘No, thank you. If it wasn’t for you believing in us we couldn’t have done what we did.’”

According to Mr. Jones, education is all about opening up opportunities and increasing pathways to success.

“My biggest joy is at graduation to see that kid who I met a few years ago and just look at where they are now,” he said.

His strengths are that he is an easy person to get along with and he’s very accessible. “I am extremely visible. I like to participate in [the school  community],” he said.

Nowadays, Mr. Jones relaxes by riding his bike or attending jazz concerts with his wife.

Mr. Jones is looking forward to moving to Amherst and getting ot know the community.

“It seems like a really great place,” he said. “The school has a great foundation and a really calming and upbeat culture.”

He also loves Amherst’s “diversity and its unique, well-educated and vibrant community.”

“As the principal, I just want to accentuate those [things],” he said.

He also said he is excited to work in a smaller district where he will be able to get to know people quickly and become “part of the community.”