Mr. Blatner ready to paddle on 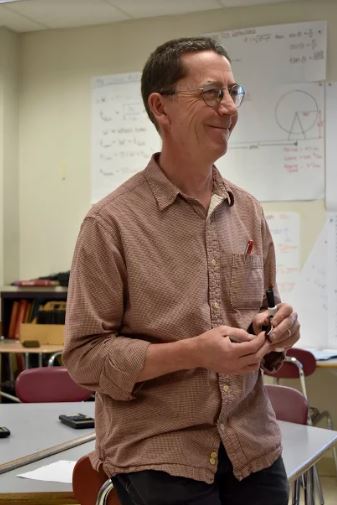 After 15 years of teaching at ARHS, William Blatner, math teacher, former civil engineer, and avid whitewater paddler, is retiring at the end of the year.

Mr. Blatner grew up in western New York. “It was very rural,” said Mr. Blatner. “My neighborhood had 20 kids in it, and we would play sports and games all the time.”

Mr. Blatner said that he remembers “working on farms and running wild,” and that he and the other kids would “get out of the house early and come back when the streetlights came out.”

Mr. Blatner attended Bard College for pre-med, but left when he was a junior. He then moved to California for a short time to do an assortment of jobs such as “organizing farms,” before returning to New York.

He attended City College of New York and got a degree in engineering. With his degree, Mr. Blatner was able to secure a job as a civil and environmental engineer. He enjoyed it for a time but his feelings eventually changed.

“I was getting tired of working for projects that no one wanted; I always felt like the bad guy,” he said. “I thought it was a better idea to be involved with a community that valued my presence.”

Mr. Blatner realized that he wanted to teach when “I reconnected with my girlfriend from college and we decided that we wanted to get married,” he said. “She was a teacher and I was having trouble with my job,” he said. “It just felt like the right thing to do.”

Mr. Blatner started teaching both math and science in 1996 at South Hadley.

Ultimately, though, he chose to focus on math because he realized that he liked the problem solving in math. “It reminded me of my past work as an engineer,” he said.

Mr. Blatner has taught for 22 years. His favorite memory from ARHS was of “15 kids after school filling the whiteboard, taking a picture and erasing it three times while working on a ‘problem of the week.’”

He also said that he will miss “seeing all the great work outside the math department,” and all of the “amazing stuff that kids do on POWs.”

When he retires, Mr. Blatner wants to play music, white-water paddle, and spend more time with his family. “I can’t believe how many paddling days I’ve missed because of school,” he joked.