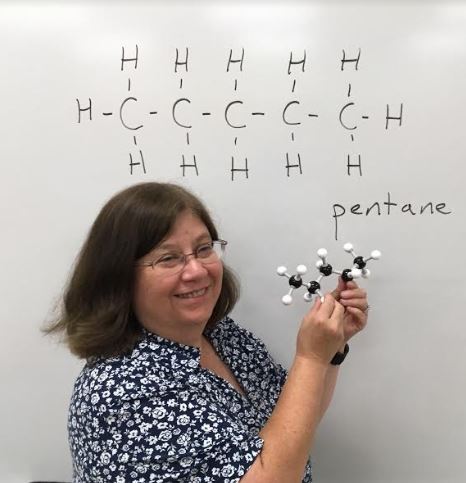 Sharon Palmer’s path to high school teaching has been paved with adventure. She was born in Pennsylvania but moved to rural San Francisco when she was young.

Palmer never thought she would be a teacher but after working as a TA while in graduate school, she realized that she loved interacting with students. She decided to keep teaching for a little while after graduating, but it quickly became a full-time, permanent job.

Soon, she began working as a professor at Smith College, but when she and other women were denied tenure based on their gender (despite the support of the entire chemistry department at the time) she left Smith and spent a year at Williams College learning how to teach high school students.

Soon after, she got a job at ARHS and has been here since then.

Palmer usually teaches five chemistry classes a year at ARHS and said that she does not have much free time as a result. She pointed to her mug that is emblazoned with the words “I can’t, I’m grading papers.”

During her rare chances to relax, she likes to read and cook, “since there is chemistry involved.” She also teaches online chemistry classes to other teachers.

This can be a challenge because most chemistry experiments are “hard to show and explain online.”

Ms. Palmer is someone who cares a lot about both science and education. She has been part of the American Chemical Society since she joined as a student researcher during her junior year of college. Today, she is on the executive local board for teachers, where she is able to “share research and network with other educators.”

One of Ms. Palmer’s favorite parts of teaching is that she gets “to share chemistry with people and get them excited about it.”

“Students have a fresh perspective on things. They look at things you already know through different eyes,” she said.

Although she enjoys teaching high school she also misses teaching college students. She believes that there is a “pipeline problem” with students going into college to study in the sciences; many do not end up not going through with it. She believes that a reason for that is the “lack of training for college professors.”

Ms. Palmer did not always plan on retiring now. She thought she might teach for longer, but her husband, who also teaches chemistry, is retiring this year, so she decided to retire at the same time as him.

A factor that also impacted her decision to retire was that she feels that education has changed significantly over the years. “Since I have started teaching the amount of work you can expect students to do has changed, and technology has changed the way people learn. Maybe I’m a bit old-fashioned,” she said.

In retirement, Ms. Palmer plans to fill many days reading; her daughter jokes that she only likes books that are either “murder mysteries or stories about Asian-Americans in California,” she said.

When not reading, Ms. Palmer also wants to travel as much as she can. She especially hopes to visit Japan so she catch up with her relatives there.