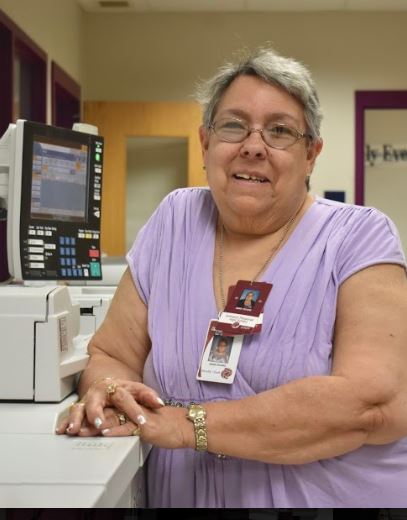 Ann Marie Picard sits behind a large desk, personalized with neatly arranged portraits of family members and covered in organized piles of papers.

Every object in the room appears to have an exact purpose and place, and there are machines of varying sizes and shapes everywhere.

Punctuated by the constant humming of the radiator, the copy room is unassuming and relatively few students venture inside on a regular basis. However, the job that Ms. Picard performs is critically important to the functioning of the entire school: she makes all the photocopies.

Ms. Picard grew up in Holyoke, Massachusetts for the majority of her life, before eventually moving to Florence upon becoming married in 1973.

Seven years later, after staying home to care of her children and working for a credit bureau, Ms. Picard first became employed by the Amherst public school system. “I got the job here and the rest is history!” she commented.

“I [spent] 13 years as the secretary of the social studies department, and when they got rid of that position, this one came up. So I have been doing this particular job for 25 years,” Ms. Picard said.

Ms. Picard’s primary responsibility is operating the copiers, and as a result she touches practically every single printed homework assignment, reading packet, final exam, quiz, and hall pass in the entire school.

Some of the materials she copies and produces include “report cards, the [student] handbook, and handbooks that have to be bound. Also, [for the Social Studies department] we’ll get a whole bunch of readings together and they will want them bound in spiral binders,” she said.

Despite the large variety of materials she photocopies, there are some common instructions; “for the most part everybody likes their stuff hole punched,” she said.

Ms. Picard acknowledges that people often have misconceptions about her job.

“I mean, people seem to think my job is boring but I don’t think it is, because I am busy in here,” she said.

The demand for Ms. Picard’s services has been  relatively constant; however on Monday mornings and during finals weeks, the copy room tends to be busier than usual.

In general, Ms. Picard reflected on her time in the copy room with positivity.

“I loved my job! I loved everything about it. The only thing I really didn’t like doing was cutting passes,” she said, laughing boisterously.  “It took me forever. And it hurt my arm.

She added, “But outside of that, I loved everything. I loved the place, I loved the people, and I never had any problems anywhere.”

In retirement, Ms. Picard will continue to do things that she enjoys.

She loves quilting, knitting and camping, and she shares ownership of a campsite in New York with her son-in-law. Ms. Picard will also spend a large amount of time with her three kids, five grandchildren, and her great-grandson.

Immediately after the school year concludes, she intends to travel to Senegal with French teacher Oumy Cisse, something she is excited for.

“[Ms. Cisse] has wanted me to go and I have wanted to go for a long time, so this is the year I am doing it,” Ms. Picard stated.

What Ann Marie has achieved is best summarized by the woman herself.

“Well, let’s put it this way, as somebody who never liked school but worked 38 years in one, I guess I did pretty good,” she said.