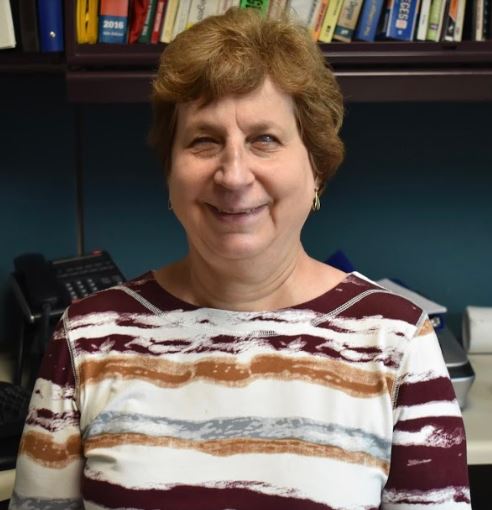 Before working at ARHS, Myra Ross was an elected member of the School Committee and worked on capital planning for the rebuilding of the school.

“My name is on the plaque out there in the little entry by the door,” she said.

At that time, she also taught violin and viola lessons, while waiting to land her dream job as a college counselor someday.

That dream finally became a reality, and now, 20 years later, Ms. Ross is getting ready to retire.

In her first seven years at ARHS, she was the School-to-Career Coordinator and also taught classes in community service-learning and career exploration.

In 2006, she became a full-time college advisor. “I’ve always wanted this job, and I felt lucky. I was thrilled,” she said.

Ms. Ross really enjoys being in a school like ARHS, where she said the students are “unique” and “have been encouraged to be very thoughtful and to think critically about things.”

She also loves the staff, noting that they are “wonderful people to work with.”

“I really love this job and I love coming to work,” added Ms. Ross.

Ms. Ross moved around the New York area as a kid and spent a lot of time in city hospitals. “I had a [number of] eye surgeries as a baby,” she said.

Her parents later moved to Long Island, because she was legally blind; in New York City, she would not have been able to attend public schools and would have been moved to a separate school for the blind. Instead, they wanted her to attend a regular public school.

“I am really impressed by my parents,” she said.

“They were in their twenties and had to make important decisions.”

Ms. Ross said her disability did not hinder her. As a child, she did “whatever any other child did.”

“I had fun,” she said. “I never let anything stop me. I rode my bike with only minor accidents, and chased my dog down the road.”

During her senior year of high school, her school performed The Sound of Music and she was cast as Mother Superior.

“It was a blast,” she said.  “I learned so many things. It was the highlight of my high school career.”

This positive attitude has stayed with her into her adult life.

“You have to make the best of what you’ve got,” she said. “Everybody in this building has something they have to deal with. You have to take the cards you’re dealt and do the best you can with them.”

Ms. Ross went to college at the University of Rochester, where she studied political science.

She said as she lost more and more vision as she got older, she decided to change to a music major.

During a teacher appreciation lunch, many of her colleagues described her as an intelligent, dedicated, hardworking, witty person. Administrative assistant Cathy Tracy said Ms. Ross is “more observant than most of us.”

She also praised her “institutional knowledge, her ability to suggest practical solutions, and her willingness to do whatever she can to help, both personally and professionally,” noting these qualities make her a wonderful co-worker and friend.”

After retiring from ARHS,  the first thing she plans on doing “is learning how to relax.”

“I used to do a lot of town government work before I got this job and I might do that again, or I might get become involved in disability advocacy work,” said Ms. Ross.