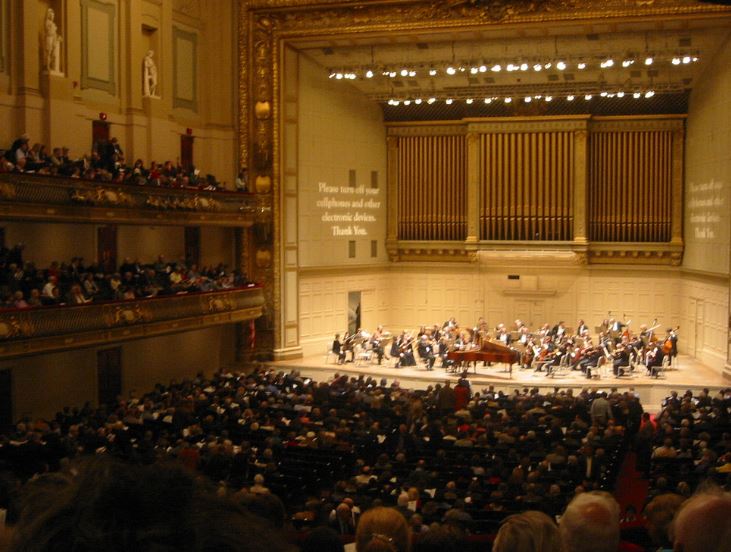 All those hours of practicing sometimes do pay off. ARHS students Isabelle Bouvier, Amanda Dee, Celia Douville Beaudoin, Angela Oldham Barca, and Sarah VanHorn were honored on March 9 at the All-State Music Festival, when they performed alongside other top musicians at Boston’s Symphony Hall.

Dee has a long history of studying music, which led her to this point. “I’ve actually done district orchestra [which is the first stage of the MMEA system] for all four years of high school,” said Dee. “That’s how I found out about All-States.”

This year was not Dee’s first time being at the All-State Music Festival. “I got into All-States two years ago, but I missed the cutoff by half a point last year, so it was nice to get in this year,” said Dee.

This experience for Dee has been one that not only expanded her musical talents but also gave her a chance to meet new people. “Because I’m the only member of orchestra who’s from Amherst, All-States forced me to get to know people from other schools, mostly around the Boston area,” she said. “I got to know several wind and brass players, which normally doesn’t happen because string players tend to bond with string players.”

But the All-State Music Festival was not all fun and games. “It’s also mentally taxing to have to rehearse for eight hours a day, but it taught me a lot about endurance, both physical and mental,” Dee said.

She also really liked the conductor this year. “He was really mindful of giving us enough breaks so we didn’t strain ourselves,” she said. Dee also noted that it’s “nice to work with different players,” since All-State orchestra is comprised of people mostly from the New England Conservatory prep program or the Boston Youth Symphony Orchestra.

Sophomore Isabelle Bouvier, whose instrument is her voice, was grateful for the opportunity as well. Bouvier credited Mr. Fruth with getting her there.

“I wound up at All-States because Mr. Fruth encouraged me this year and last year to try out for Districts, and from there I got an recommendation to audition for All-States,” she said.

Bouvier learned a lot from Choir Director Kimberly Adams after spending a total of 18 hours rehearsing for the concert. “This past weekend was one of the greatest learning experiences I have had. Dr. Adams, is so charismatic and knowledgeable,” she said.

They had rehearsal for nine hours a day, two days straight, but Dr. Adams made it “seem easy,” said Bouvier.  “She had so much to teach us, and I walked away in awe of how much I learned about singing. I also met so many wonderful people who were welcoming and helpful and funny, and I think we’ll stay in touch for a long time.”

As a result, Bouvier realizes more than ever before that she likely wants to “go into a career in music.”

“I got in last year and was unable to attend, so it was extra important for me this year to be able to prove to myself that I can do it,” said Bouvier.

Senior Celia Douville Beaudoin, whose instrument is also her voice, auditioned for Districts and got in with an All-States recommendation.

Mr. Fruth had encouraged Beaudoin to take the leap. “I was wondering if I should audition at all, because the festival was held the weekend before production week for the musical, but he assured me that I would be missing out on something life-changing [if I didn’t]. He was right,” said Beaudoin.

But Beaudoin feels that her singing has improved greatly because of the instruction of Dr. Adams. “Dr. Adams worked in detail on all of our songs, so that what was already good became much, much better. I was especially appreciative of the terminology and technique she taught us along the way,” Beaudoin said.

Beaudoin has a wonderful way of looking at her voice. “It’s part of my body! I love that I bring my instrument wherever I go. A viola or clarinet can be repaired or replaced, but I’ll have my voice for the rest of my life. It’s a really rewarding skill to practice, for that reason,” she said.

Beaudoin found Symphony Hall to be spectacular. “The sound we made as a choir was gorgeous and immense, and singing in Symphony Hall was magical. It’s a magnificent golden room with the highest ceiling I’ve ever seen, and its acoustics are incomparable,” she said. “When we finished our final song, which was a rollicking piece in Haitian Creole, I felt like I had crossed the finish line of a race. I was completely exhausted, breathing heavily, and it was so affirming to watch as the audience rose for a standing ovation.”