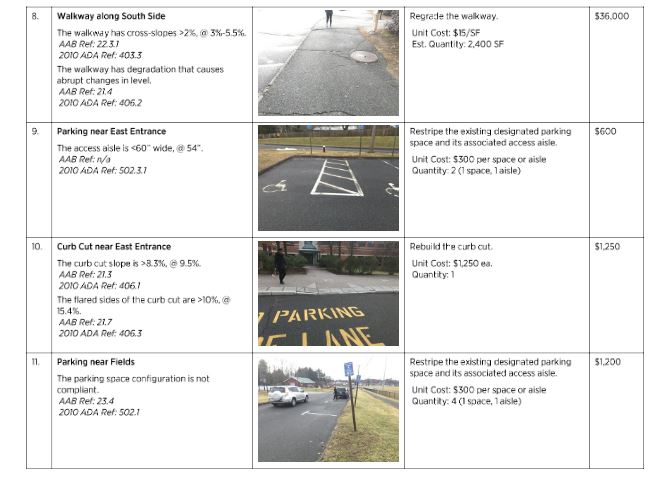 All Amherst schools were audited by Julia Garofalo and Stéphane Pierre-Louis of Kessler McGuinness & Associates (KMA) in December of 2018 to find out whether they are truly accessible to people with disabilities.

Dr. Faye Brady, the director of special education services for the district said that both “concerns expressed by parents and the district’s commitment to having our schools be accessible to all” led the district to proceed with the audit and learn more about areas of need.

According to Dr. Brady, the law provides specific guidance and regulations for public schools to adapt and/or build schools that are accessible for all.  The ADA law was signed on July 26, 1990, and buildings that were built prior to that did not have these regulations to guide their building plans.

“Any new buildings since the passage of the law are required to be completed in compliance with the law,” she said.  “Older buildings, like our schools, make efforts to address and remove barriers even though not built when this law was in effect.”

Right from the moment people enter ARHS, they might realize it is lacking an accessibility feature; ARHS does not have automatic door openers, which according to the audit “are not an accessibility requirement.”

Nevertheless, there were other areas of the school with greater concern, including inaccessible classroom furniture, the lack of an accessible route to the playing fields, and many ramps that are not up to code.

According to the audit, ramps have “excessive slopes and non-continuous handrails.” For ramps to meet the ADA regulations they are required to have a 1:12 ratio, and every inch in height requires a foot of length.

Additionally, reception counters in the main office are too high, as are many sinks and hand driers in the school.

During the comprehensive assessment, auditors asked parents and staff on their opinions about how accessible the high school was.

Many comments were about “lack of space for maneuvering” as well as the long distances to get to the accessible routes throughout the school.

Efforts will be made to make the school more accessible.

“The district, with input from stakeholders, is reviewing all the findings in the audit and will be developing plans to address items reported,” said Dr. Brady.