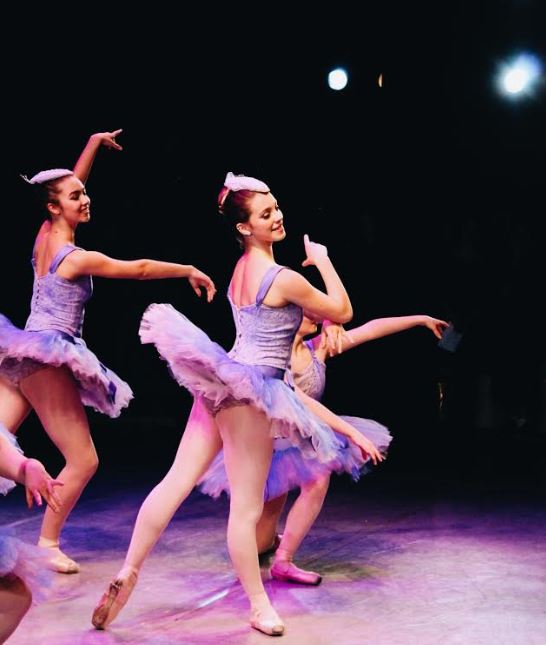 Julia Slaughter and Olivia Rudd, in the Nutcracker.

For many people, the holiday season is synonymous with the sweeping score of The Nutcracker ballet by Pyotr Ilyich Tchaikovsky; holiday traditions are incomplete without an evening spent at the ballet, watching snowflakes come to life, a journey through the Land of the Sweets, and the iconic dance of the Sugar Plum Fairy.

As the lights go down in the theatre, the overwhelming smell of popcorn filling the room, the curtain rises on a lavish 19th century Christmas party, where a young girl named Clara is gifted a magic nutcracker.

Later, Clara sneaks downstairs in the middle of the night to see her new toy and is horrified to find that her younger brother’s toy mouse has come to life as a fleet of giant mice led by the evil mouse king.

Luckily, Clara’s Nutcracker comes to life and is there to help defend her, and takes her through a forest of dancing snowflakes into the Land of the Sweets.

There, candies from around the world dance for her, including Spanish hot chocolate, Chinese tea, Arabian coffee, Russian candy canes, French marzipan, a garden of waltzing flowers, and the Dewdrop and Sugar Plum Fairies.

At the end, Clara returns home from her adventure, and realizes that it was all a dream.

Pioneer Valley Ballet (PVB) has been putting on The Nutcracker every December for the past forty years at the Academy of Music Theatre in Northampton.

The cast of dancers range in age from four-year-old reindeer all the way up to principal dancers from professional companies, and dozens more are involved in this large-scale production, including artistic directors, faculty, volunteers, stage and lighting crew, and more.

Over the course of Nutcracker weekend, six shows are performed, with hundreds of people attending each; however, many do not realize the amount of time, effort, and dedication required to perform show after show every year.

This year was my fourth PVB Nutcracker, and being a part of this show has been an amazing, fulfilling, and completely exhausting experience. Our schedule is very intense, particularly the week leading up to the shows, known as theatre week, where dancers and crew spend up to six hours a day in the theatre after school to practice spacing, lighting, costumes, and quick changes.

Many students can relate to the struggles of being an athlete and having to balance homework, practice, games, and any other extracurricular activities; however, because ballet is often not thought of as a sport, it is overlooked as a major time commitment. Advanced dancers rehearsed for six hours a week in addition to their daily technique classes September through November.

Lily Stern is an eighth grader at Westfield Middle School, and performed as a soldier, snowflake, Spanish dancer, Marzipan, flower, and as an understudy for the role of Clara.

“I’ve found it pretty hard to balance both [school and dance] because I take both very seriously,” she said.

Remy Gutterman is a freshman at Northampton High School, and was a soldier, snowflake, Spanish dancer, and flower.

She has found that her teachers are, for the most part, understanding when it comes to late or missing assignments around Nutcracker time. “Sometimes it gets a little hard when I have a lot of assignments due, but I usually can get most of it done,” she said.

“Theatre week is a stressful time for everyone,” said Maddi Baptiste, a junior at PVPA. “But especially as Clara, I have to be here whenever anyone is here, even if I’m not dancing. It’s hard to leave school, and sometimes I have to miss some of my classes.”

“Everyone gets really stressed out, and you’re trying to calm yourself down, but everyone else is freaking out too,” said Olivia Rudd, a junior at ARHS who performed as the soldier doll, a mouse, snowflake, flower, and lead Marzipan. “It’s a struggle to make everything perfect before the show.”

Despite the stresses of Theatre Week and performances, there are aspects of it that dancers look forward to every year. “It’s close to our show, which gets us really excited, and it’s close to Christmas, so we have a lot of fun things happening,” said Rudd. “We do Secret Santa on the Friday before the show, and everyone brings their stockings.”

Dancers in the advanced division also decide on a spirit week of correlating leotard colors.

Some examples from this year were twin day, pink/purple day, red/green day (for Christmas), and blue/white day (for Hanukkah).

Hours in rehearsal also means hours spent with some of your closest friends. Across the board, everyone I interviewed agreed that spending time with their fellow dancers is the best part about Theatre Week.

“Getting to be with my PVB family all week is incredible, and we have so much fun during breaks,” said Baptiste. “We get really sore, but in the end, it’s all worth it.”

The advanced class has around 20 students in it ranging from eighth grade to post-grad age.

“[The advanced class] is very welcoming, and everyone is so nice,” said Gutterman. “It’s a really great community and I’m happy to be part of it.”

Not many people know the feeling of performing on stage for hundreds of people. The adrenaline rush of waiting in the wings, the glare of the lights, and the language of wordless glances spoken between dancers on stage is incomparable to any other feeling.

“I have been performing since I was little, but it still makes me nervous every time,” said Rudd, who performed two solos in this year’s Nutcracker. “If you fall in love with it, then it’s different. When you’re performing on stage and you really love it, it’s such a different feeling that you can’t ever get [anywhere else].”

The camaraderie and feeling of family is very prevalent both backstage and onstage at the theatre.

Walking through the historic backstage of the Academy of Music, where plaques with names like Elizabeth Taylor grace the doors, you can hear laughter, complaints about sore feet, and lots of Christmas music. “

We sing a lot in the dressing room while we get ready, so that’s fun,” Baptiste said. “The people who see us dancing are lucky to not hear us singing.”

As the curtain went down after the dancers took their final bows at the end of Sunday’s 4:30 p.m. show, almost everyone broke down in tears – the hard work, exhaustion, excitement, and magic was all over, and three seniors said good-bye to their final Nutcracker.

As soon as everyone headed back to their dressing rooms, costumes were packed away in boxes to store until next year, the crew began disassembling the stage, and within a couple of hours, it was almost as if none of the magic had ever happened.

While everyone was relieved to finally get some rest, they left the theatre teary-eyed, knowing that they will miss being a part of this production, that is, until the chaos begins again next September.