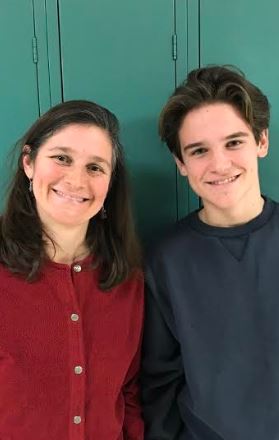 Having a school that feels “like home” is an ideal for most, but it’s a reality for the ARHS students whose parents teach at the high school. A look into the lives of some of these students and their parent teachers illuminates the perks and peccadilloes for teachers and their children working and studying at the same school.

For social studies teacher Samantha Camera, it took some time to get accustomed to having her son Jonas Camera, now a sophomore, attend school in her workplace.

“The first semester was challenging because it wasn’t just about having Jonas in the high school, it was also all of his friends, many of whom I had coached on the soccer field, who were there too,” she said. This required Ms. Camera to learn to answer to a wider range of identities including Ms. Camera, Sam, Mom, and coach.

All the teachers I spoke to heard directly from other faculty members about their child–from noteworthy positives to misbehaviors.

Mr. Young, an ARHS computer science teacher, said this occurs “in a really general sense. Someone might say that they enjoy having Nor in class, that he contributes good ideas, stuff like that.”

Ms. Camera also hears about Jonas’s school life from other teachers. “I get frequent reports about his progress and participation, both positive and negative,” she said.

Jonas Camera feels that his mother Ms. Camera ends up hearing about a lot of things that happen to him during his school days that she might not otherwise know.

“If I do badly on a test or do something dumb in class, like fall asleep, then she’ll know and that’s a negative,” he said.

Social studies teacher Tom Fricke prefers to keep his professional and private lives separate. Dividing spheres of responsibility with his wife is key to this success. “I try to have my wife field most of the parent/guardian conversations, so that I can stay in my faculty role when I’m at work,” he said.

“I can bring in [Nor’s] lunch when he forgets it, or his running shoes,” said Mr. Young. “It’s very convenient that way.”

Ms. Camera agreed that there are logistical advantages. “On the simplest level, I understand how to get information out of Powerschool. On a more sophisticated level, I know his teachers and can communicate with them more directly than I would be able to otherwise,” she said.

Jonas Camera likes that he has the ability to drop off his school bags and sports equipment in his mother’s classroom.

Nor Young recalled multiple times where he had forgotten to get a permission slip signed and was able to just run downstairs and get it signed by his dad. Another practical benefit Nor enjoys is having his dad drive him to school if he misses the bus.

Shared understanding is increased between students and parents studying and working at ARHS. As a whole, both students and teachers feel that they have gained deeper insights into each other’s lives.

Mr. Young’s knowledge of school events and testing schedules helps him support Nor.

“The fact that I know a lot about ARHS as a teacher just makes it that much easier for me to understand his daily schedule, his homework, his clubs, all those sort of things,” he said.

Ms. Camera loves that she can ask Jonas’s viewpoint on social dynamics and controversies, and stay tuned in to pop culture. “My engagement in the school culture and life is much better informed because of our ongoing dialogue,” she said.

Nor Young understands the struggles his father Mr. Young can have teaching teenagers. “When he like talks about how he’s doing teaching classes, I kind of get it,” Nor said.

The presence of their own children in the building encourages teachers to examine their teaching styles and to think more about their students as whole people and also about equity for all students.

Ms. Camera found that Jonas’s presence in the school changed her perception of her students in general. “It has encouraged me to care for students in the building more holistically, which has been good for my development as a teacher,” she said.

Mr. Fricke consciously works to treat his children the same as he would other students.

“I have to be careful that my insider view doesn’t turn into privilege or entitlement,” he said, “but my kids are very level-headed and practical, so it’s been fine.”

To many students, the concept of going to school where your parents work may bring up feelings of awkward encounters, embarrassing interactions, and compromised privacy but the ARHS reality is starkly, at times joyfully, different.

ARHS students reported heartening positives about having their parents work at their high school.

Nor Young likes the inside jokes he shares with his father that other family members don’t understand because they’re not at the high school on a daily basis. Nor said, “I kind of like having him there and being able to say hi. We have a good relationship going on.”

Jonas Camera has found that having his mother work at the high school is almost always a good thing. “I like that she works here because she can help me with advocating for myself with other teachers or understanding school topics better,” he said.

Similarly, Ms. Camera explained the hidden gem of teaching at her son’s school.

“People wouldn’t anticipate how joyful it is to get to see him in his daily life at school,” she said. “Many parents would probably love to have little glimpses of their child’s day on a random basis.”