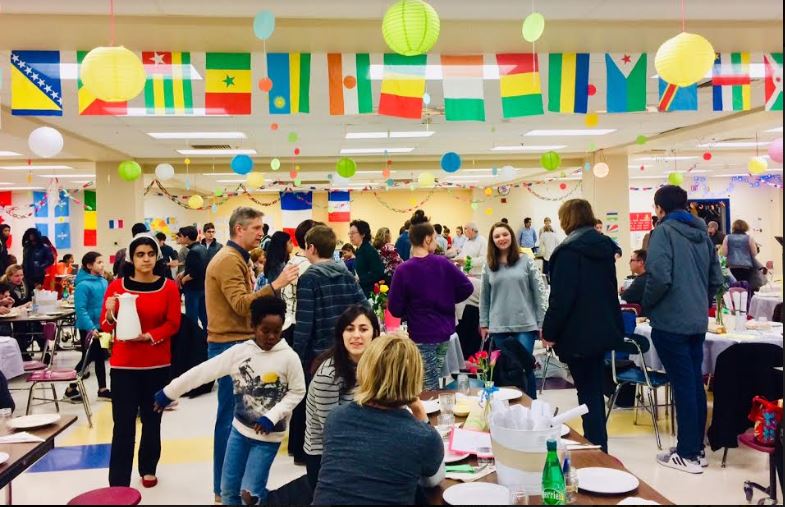 This year’s French Dinner, hosted by the ARHS French Club and Madame Cisse’s classes, was one of the best attended ever.

According to Jamie Simonson, the club’s president, planning for the event started in October and lasted until the dinner, held December 5, 2018, in the high school cafeteria.

Simonson said it was the second French Dinner he was involved with.

“We wanted to expose our community to Francophone culture. People usually tend to think about France only, when in reality there are plenty of French-speaking communities outside of France,” said Simonson.

On the night of the dinner, the cafeteria was transformed.

A line of flags draped over the head of diners, and the smell of spices and sweets wafted through the air, giving a notion to diners of dining in a multinational French restaurant.

The sound of live jazz echoed throughout the cafeteria, courtesy of the ARHS jazz band

Flowers were set out at every table.

Adding to the traditional Francophone style was high quality French brie with a rich creamy texture, each wheel accompanied by a crispy full baguette.

Every Francophone nationality was represented via the cuisine, from beef pies, to coconut rice dishes, to crepes and nutella.

After planning had begun, the organizers realized that it was economically unrealistic to function as a fundraiser.

Since Foods classes were a cut in last year’s budget, “this year, we had to switch from a fundraiser to a cultural event,” said Simonson.

Foods teacher David Jean and students had helped the dinner in the past by cooking in house, but with its absence, the event needed a caterer, which drove up the cost for the French Club, lowering its profit.

“Last year [we made] around $1,000 even though fewer people attended; this year we probably only made a couple hundred,” said Simonson.

The French club has been trying to plan a trip to travel to Montreal and fully immerse themselves in French and Francophone culture.

But it’s costly for a public high school club to travel to another country for a field trip.

Simonson said the group is nevertheless continuing to work toward its goal.