Talib Sadiq moves up to the high school, is eager to ‘interact with students’ 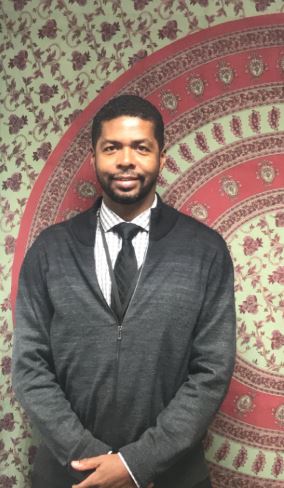 Mr. Sadiq is excited to be at the high school.Photo: Ian Yankson

Former Middle school counselor Talib Sadiq is one of our newest additions to our school, filling the position of Assistant Principal. Born and raised in Amherst, Mr. Sadiq worked at the middle school for 11 years, “seven as a Guidance Counselor, and four as the Dean of Students.”

He attended college locally, in Western Massachusetts, earning his Associates Degree from Holyoke Community College and a bachelor’s and master’s degree from UMass Amherst.

Some of Mr. Sadiq’s responsibilities in a school day are to create schedules for Early Release days, Advisory, MCAS, snow days, and other special schedules that need to be made. “With a lot of help, I also build the Master Schedule, which means that I need to make sure every single student has a schedule that gives them all of the classes they want and need to graduate, and provide them the supports they may need,” he said.

Mr. Sadiq also oversees the Advisory Committee. “We create the advisory activities that are done in most of the advisories. I supervise the Guidance Counselors, Performing Arts teachers, and Librarians. Those are most of my major responsibilities,” he said.

Mr. Sadiq wanted to work at the high school because he thought it was a great opportunity to work with, and interact with students in a different way than he had at the middle school.  “Working with high school students and being an administrator were things I knew I wanted to do at some point in my career and I’m happy that I am able to do both of those things in the same school system my two youngest children are in,” he said.

Mr. Sadiq commented about how there are a lot of good things going on at the school, but a few of Mr. Sadiq’s goals while at Amherst are “to help increase student participation in some of the decision making that happens at the school, especially in regard to classes offered, peer mediation, and conflict resolution.”

While not working, Mr. Sadiq spends most of his free time with his family and friends. He also likes to do work around his house, “fixing small things, doing yard work, and stuff like that.”

One of Mr. Sadiq’s favorite high school memories was “scoring two TD’s against Northampton my senior year which helped the ‘Canes beat Hamp at their Homecoming.”

While enrolled in Amherst as a high schooler, he  had dreams and ambitions to play professional sports, namely football, or do something involving sports.

“I also thought about trying to be a physical therapist or work at ESPN,” he said. He never thought he would end up working in any school when I was young. “The journey life takes us on can land us in the most unexpected places,” he said.