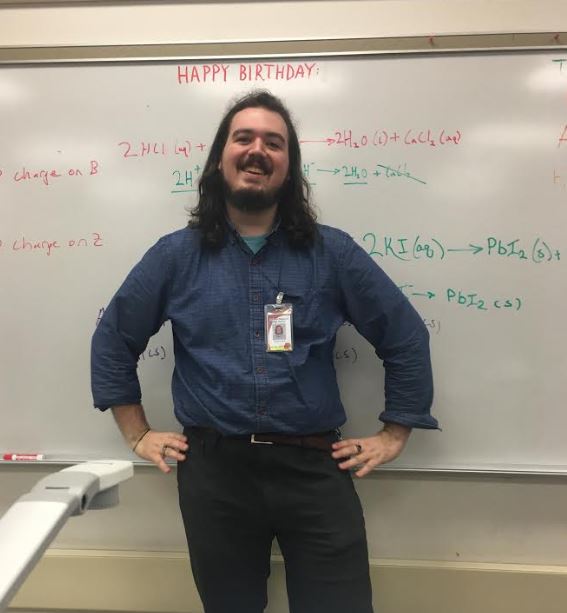 Imagine  10 year old Rudi Scherff: mixing chemicals, creating reactions, and dreaming of the time when he becomes a mad scientist. Though he isn’t a mad scientist, Mr. Scherff is busy pursuing the career in the sciences he wanted as a chemistry teacher and paraprofessional at Amherst Regional High School.

Ever since he was a child, science has always been his thing. “When I was growing up I wanted to be a mad scientist. Part of it was my uncle was an astronomer and I did a lot of scientific stuff. Growing up it was the subject that clicked most with me.”

During his childhood and pre-teen years, Mr. Scherff would often mix chemicals and take stuff apart just out of curiosity. “My whole life I was trying to figure out why stuff happened or how it worked,” said Mr. Scherff. This interest in the sciences and desire to understand how the world works continued all throughout his teenage years.

As a student at Emmanuel College, he received a major in chemistry and graduated in 2016. It is“a very small school. I had a lot of small classes and I had teachers that were the model for how I want to be as a teacher,” said Mr. Scherff.  “There were a lot of people that just seemed to care about me.”

Classes and studies felt like they were more about learning than just getting through the school. These excellent teachers and classes have helped to shape his interest and his path in science. However, he’s “still trying to figure out” what he wants to do and “doesn’t really have any big vision.”

Mr. Scherff’s mentor is science teacher Mike Thompson, who has worked at the high school for 18 years as a chemistry teacher and for a period of time as an interim  assistant principal. Mr. Thompson cited his ability to work with students, along with his knowledge of science, as reasons for why he’s so enthusiastic about him as a new teacher.

“He has a nice approach. He doesn’t talk down to students, [and] he has a really good vibe,” said Mr. Thompson. These feelings seem to be shared by Scherff’s students as well. One student of his, J.B. Mills, had nothing but positive feedback when asked about how this year has been going. “Mr. Scherff has helped people understand the concepts better and done a good job explaining things to everyone.”

According to Mr. Scherff, this year has been going really well so far.

So far he’s been able to get to know the kids very well. He only works with “one class and that’s really nice,” he said. “I get to know them much better than if I had 100 kids.”  He claims to be “excited to keep this year going and continue teaching his students.”