Chromebooks for almost all 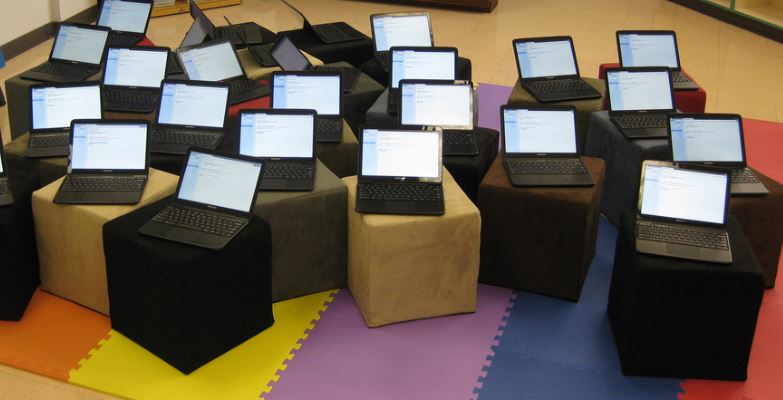 All ninth, tenth, and eleventh grade students were given a Chromebook to use at school.Photo: flickr.com

The money which would have been used to replace laptop carts at ARHS has gone instead to a one-to-one initiative in which every student in grades nine, 10, and 11 has an opportunity to sign out a Chromebook that is theirs for the year.

This plan has made working with computers in class way more convenient and allowed students without a computer at home to have access to a device.

“Everyone has access to a computer and you can reliably access online material,” said Dylan Robson about the process of using computers in class being streamlined by Chromebooks.

“[They] make it a lot easier to be successful in the classroom,” said Dan Block.

From a teacher’s perspective, the ubiquitousness of Chromebooks is a plus. “Chromebooks have been a game-changer,” said English Department Head Sara Barber-Just. “The English department does so much writing in class: low-stakes and high-stakes assessments, Google slideshows for group-work, creative projects, and personal writing. I even give open-book literary analysis quizzes on the Chromebook now.”

In the past, Ms. Barber-Just took her classes to the lab or had them log on to laptops from a cart in her room. The laptops weren’t set up to print to a local printer, though, and students had to go through a multi-step process to print each time a new document was completed.

The Chromebooks, however, are synced to printers in the building. She said it took longer for students to log on to the laptops and to access Google Classroom or their Google Drive.

“Sometimes the charge ran out on the laptops mid-day, too,” she noted. “The Chromebooks stay charged all day and I have some charger cords in my room in case someone forgot to charge at home.”

Chromebooks have also helped many students who didn’t have computers at home.

“Sometimes I don’t have a computer at home, so now I can use my chromebook,” said senior Soul-Jah Ferreira, who went through a process of requesting one, though only people in grades nine through eleven were guaranteed a device.

“The Chromebooks were budgeted based on the number of students in each class,” said Interim Principal Miki Gromacki, the mastermind behind bringing the one-to-one initiative to ARHS.

It also made the most sense for the seniors to be the grade without the Chromebooks, considering many already have laptops or devices that they use and they are the first class slated to exit the building.

Even so, extras from the grades nine to eleven that people chose not to sign out are available for any senior who wants them.

The change from laptop carts and computer labs to personal devices had been in the works for a while.

“We started to talk about it eight to ten years ago and Information Systems Director Jerry Champagne has had this vision for years,” said Ms. Gromacki.

“Lots of people have put a lot of work into organizing this process,” said Writing Center Director Amanda Lewis, in room 141, who has done a lot to keep track of the checking out and repair of Chromebooks.