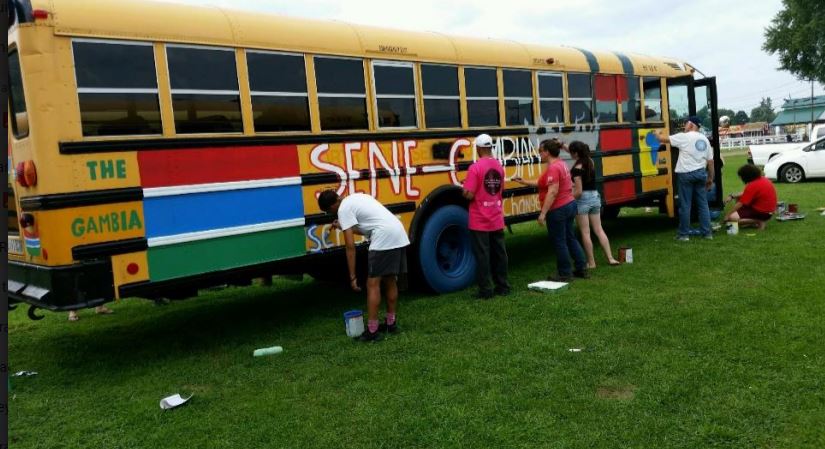 Club members, working hard to paint the bus, before it was defaced.Photo: Senegambian Scholars

On Saturday, September 1, at the Three County Fair Demolition Derby, an ARHS Senegambian Scholars’ bus that had been painted with messages and art promoting Africa was painted over by fairground employees in an attempt to prevent the spreading of “negative messages.”

The previous Monday, the Senegambian Scholars Club met to paint the school bus that was to be featured in the derby.

They planned on using the demolition derby as a platform to educating the public about Africa and the diverse cultures that call Africa home.

The students’ artwork included blue tires to represent the Atlantic Ocean, a bridge going over the bus to connect the United States with Senegal and The Gambia, baobab trees and fishing boats which can seen all over West Africa, the flags of the club’s partner countries, and the American flag.

They also included a map of Africa with the motto “Africa is not a country,” a statement intended to announce its continent status, and to educate those who wrongly refer to it as a single nation.

When members of the club attended the derby late Saturday evening they were appalled at what had been done to the bus they had worked on.

Even club members that had not helped to paint the bus were deeply upset by the actions of the fair.

“To see something I was a part of defaced like that was pretty difficult,” Knapp said. “It unearthed a big problem in Western Mass. that we don’t like to think about.”

Regardless of the General Manager’s intentions, the message sent through his actions was similar to the one he was trying to prevent.

The terribly negative, anti-African message sent by painting over the bus was the most troubling aspect of the situation.

Bruce Penniman and Momodou Sarr, the advisors to the Senegambian Scholars club, raised a number of carefully worded questions to the general manager of the fair, but ultimately, “It was something I just couldn’t figure out,” Mr. Penniman said.

What bothered Mr. Penniman most was the fact that the whole situation could have been avoided had there been adequate communication between the authors of the artwork and the fair management.

However, through a series of emails between the two parties, the General Manager of the fair and the individual who painted the bus apologized for any negative message they might have promoted.

Mr. Penniman said they also provided “a financial contribution to the club” that will contribute to the current fund for the travel expenses of students from Senegal and the Gambia for the next exchange trip to Amherst.

Through the ongoing dialogue, the General Manager and the individual who painted over the bus also agreed to meet with the club to discuss in person what the club hopes to achieve as well as turn the unfortunate situation into an educational experience.

Ultimately, Mr. Penniman believes that what started as a very sour situation has turned into a positive opportunity for the club to spread their enlightening messages to a wider audience. He said he would even consider potentially partnering with the Three County Fair in the future to continue spreading the club’s pro-African messages.