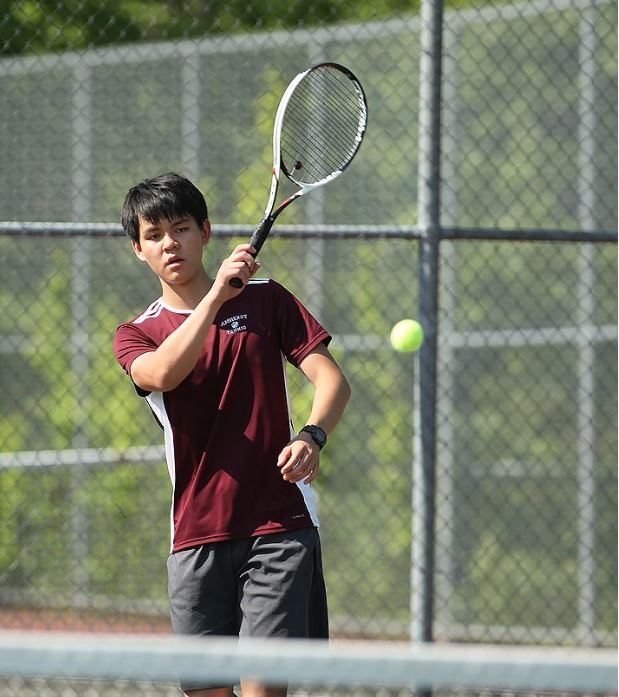 Captain Austin Xiong is having a great tennis season.Photo: Masslive.com

Amherst boys’ tennis enjoying a very successful season, with only one loss so far. The team is ranked second in Western Mass and has already qualified for the playoffs with three matches left in the season.

Captain Austin Xiong has been playing tennis since second grade, though many team members are newer to the sport and are less experienced. This year the team has gained many new members and has a lot of depth. “Everyone is very talented,” Xiong said.

Hanlong Zheng, a new player to the team, and a senior, played tennis for the first time this year, and has said he’s learned a lot already. “We always watch each other play, so connection is there,” said Zheng.

The team is all around quite motivated. “Everyone shows up 30 minutes early for extra practice,” Zheng said, adding on practice time to the team’s normal 90 minutes sessions.

Xiong said the individual and team aspect of a sport like tennis come together in an interesting way, because team members always understand when they are at fault, but also can enjoy their own success when they win. However, the team has team spirit and are supportive and understanding of other players’ mistakes.

Xiong feels this has been by far his best season individually, developing many of his skills. Many team members spend a lot of time practicing with each other during the summer and offseason to hone their skills, and Xiong sees that this work has paid off based on the success during the season.

As far as specific games go, Xiong rates the team’s May 7 win against Northampton as their best victory. “Northampton has always been our rival,” he said.  “We lost to them twice last year.”

Xiong feels his best individual performance of the season came during a loss to Longmeadow. He said he was playing some of the best tennis he had ever played, and had a close loss in a hard-fought game. “We played like there was no tomorrow,” said Xiong.

Confidence in the team’s future is high, as the team is “looking solid to make the final of Western Mass,” said Xiong.

However the team still has “lots to improve,” said Xiong. Xiong said a major difference in this year’s team compared to last year has been team spirit. “Overall team spirit has been stronger, especially with an influx of new players,” said Xiong. When asked about the team’s success this year, Xiong said “We’re doing great,” and Zheng said “we’re crushing it.”

This season hasn’t just been special because of the team’s success. Team members were eager to share a story of some unusual motivation. In an important match against Northampton, a younger team member, Eli Ji was losing 5-1 in a set to six games. After his brother, co-captain Nathan Ji promised him noodles if he was able to win the set, Eli Ji pulled off the unlikely feat to earn the victory and the noodles.

The motivation of the noodles recurred later in the season earning Eli Ji the name “noodle master.”