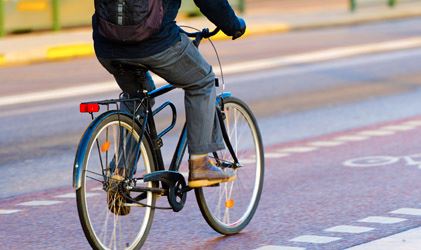 Once the weather begins to warm and the streets thaw out, you will begin to see close to 20 bikes locked up to the old rusted rack outside the athletic office. The current school population is about 999, including teachers. This means that only about two percent of the school population commutes by bike.

Two percent is slightly above average, when according to a 2016 survey conducted by The League of American Bicyclists only 0.9 percent of Massachusetts workers commute to work by bike. Massachusetts ranked eighth nationally, while Oregon was first and Montana was second with 2.2 and 1.2 percents respectively.

Bike commuting comes with many benefits over the typical car commute.

The typical worker might have a nine to five job, leaving them little time to fit in other activities. Biking to work can check exercise off your to-do list without adding much time to your typical commute. It will also lower your blood pressure, provide you with less stress, and probably leave you feeling more awake to start the day.

Going car free by hopping on the bike saddle can save you money on fuel, maintenance, parking fees, and traffic tickets. You are likely to save an average of  $5,000 a year in payments, maintenance, and insurance costs.

Rising adults often seek a car as their ticket to freedom. However, bikes provide a cheaper alternative that is better for you and the environment.

Richard Eckart, a math teacher at ARHS, often incorporates biking into his work transportation. “I do a combination of things,” said Mr. Eckart. Often times Mr. Eckart will just ride home, after he and his bike catch a ride to school with his wife or son.

“I don’t have time in the morning,” said Mr. Eckart. “There’s a lot happening to get everyone ready; there are too many loose ends.”

“I have started using the bus,” said Mr. Eckart.  Mr. Eckart has found the bus as an effective way to travel to and from school with his bike. “I catch the 45 that stops at the [bus stop] near Bruno’s,” said Mr. Eckart. He can bike to and from the bus stops, as part of his commute. “It goes right to downtown Belchertown,” he said. “I live almost on the bike route.”

Mr. Eckart has found two reasons for starting to commute by bike.

“It’s sneaky fitness,” said Mr. Eckart. While it is not an intense workout, he has found it a good way to get the blood pumping and put his mind in a better place.