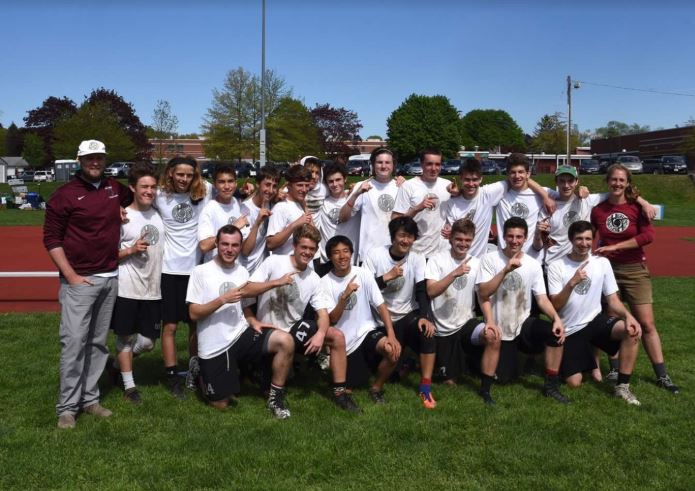 The Amherst boys’ Ultimate team at the Invitational.

Walking through the Amherst High School parking lot you can hear yelling all around you. You turn the corner of the school to see the fields engulfed by dozens of tents and Frisbees flying through the air.

“Let’s go Canes,” is all you can hear from the field enclosed by the track. The Amherst varsity team is playing Yorktown. The Amherst players are not told the score so they play every point like it’s the last which reflects in the plays.

Yorktown has the disc by their end zone; they pass it out to a player close to the sidelines. With his back turned, waiting to receive the disk, the player is unaware that #27, Orion Cable, is running in from behind. Cable leaves his feet to make an incredible layout block which secures Amherst’s possession with great field position.

The game is called for half time and the teams find refuge from the rain under their team tents.

Players start to chug gallon jugs of water and a big box of oranges is ripped open and devoured within seconds. A bag of chips is also opened and quickly consumed.

Some players are walking around eating pickles to prevent any cramping, which will be crucial during the second half.

During the second half of the match, you can see the fatigue start to kick in.

Players are crouched down with their hands on their knees; some seize up with cramps and have to limp off the field and immediately be stretched out.

However, Amherst finishes the game strong by beating Yorktown. With a bye in the next round, the players are free to get lunch from the cafe tent or look at the new Amherst invite merch in the Spin store.

Every year, 32 teams descend upon Amherst to participate in the annual Amherst Ultimate Invitational. This tournament is generally run by five people: Jim Pistrang, both the boys’ and girls’ Amherst varsity coaches, and the heads of the booster organization and parent volunteer group.

Every year the tournament starts with a new budget which consists of money coming from the entering teams and money made from selling food at the café, and clothing from the sponsored vendor.

The tournament is organized into four different brackets, a Division 1 and 2 for girls, an Open I for boys’ varsity, and an Open II co-ed division.  Teams come from as far as the West coast and the Midwest some years. The tournament is an open invitation and the seeding is determined by a team’s record and what teams they have played.

The Amherst Invitational is one of the oldest, if not the oldest, high school Ultimate tournaments in the country.

The town of Amherst finds pride in having a tournament here. Ultimate has also become so prevalent in Amherst that generations of players have gone through the system.

The Amherst boys’ varsity team has been one of the best teams in the nation for many years. This season is no exception. Captain Caleb Seamon said it has “gone where I wanted it to be and more.”

Winning all the tournaments they’ve participated in earned them a second place ranking nationally among D1 high schools.

However, the boys did not start out the season too confidently. Losing seniors has hurt the team but others viewed it as a reconstruction year.

The first and biggest tournament the team participated in was in Atlanta and just weeks after team tryouts were held. Seamon said they entered the tournament as a “group of Ultimate players and left as a team.” The unexpected win against a highly ranked team in the Nationals bolstered the team’s confidence.

The Amherst Invitational was another big win for the team. “I personally wanted it for a long time,” said captain Caleb Seamon.

After being sidelined all of last season due to an injury, it was a big win for Seamon. The win also meant a lot for the young players on the team as they’ve been growing up watching and playing in the tournament on the middle school and JV teams.

The girls’ team came in third in the Amherst Invitational, but that didn’t stop them from having fun. Though suffering a 12-10 defeat to Four Rivers, the team doesn’t view it as a failure but instead as an exponential improvement.

The team had played Four Rivers before the tournament in a blowout loss, so coming within two points showed growth.

This season, the team has brought on a bunch of newcomers. As first timer Bona Lee describes it, “for new players it’s a lot to live up to, playing with these very experienced players.” This is Lee’s first season playing Ultimate and she made it straight onto varsity.

The team has also been plagued with injuries and sickness this season. “Sometimes it feels like our team is never complete from the injuries and illnesses,” said Carlyn O’Leary, a senior on the team.

The injuries and illnesses have put a damper on their season and a dent in their roster during tournaments.

However, with their biggest tournament still to come, the girls team is determined to finish off the season strong.

Ultimate drew in all the players on these teams for different reasons.

It was created in the 1960s by college students, so it’s a fairly new sport and still has its kinks to work out.

However, this sport’s different style appeals to many who note that the “team aspect of Frisbee is very strong,” when compared to other sports, said Seamon. The smaller community drew in Seamon, and he also had exposure to it from his family. Many alumni of the sport encourage their children to join the community.

Communication with not only your teammates but also the opposing team is another big aspect of Ultimate.

Since the players call their own fouls, in-game communication is vital to the flow of the game. “It definitely helps you outside of Ultimate,” said Seamon, who noted it has improved his communication skills off the field and in all aspects of his life.

Ultimate is not only an American sport but it has grown to occupy a space on the  international stage, and the community is pushing for entry into the 2024 Olympics.

Ultimate also features its own international tournament that is made up Worlds teams from countries like America, Japan, and Germany.

Amherst’s very own Seamon and Cable will be featured on the United States’ Worlds team. “Personally, I’m very proud to represent the coaches and our program,” said Seamon.