By Emily Hu and Julia Jemsek 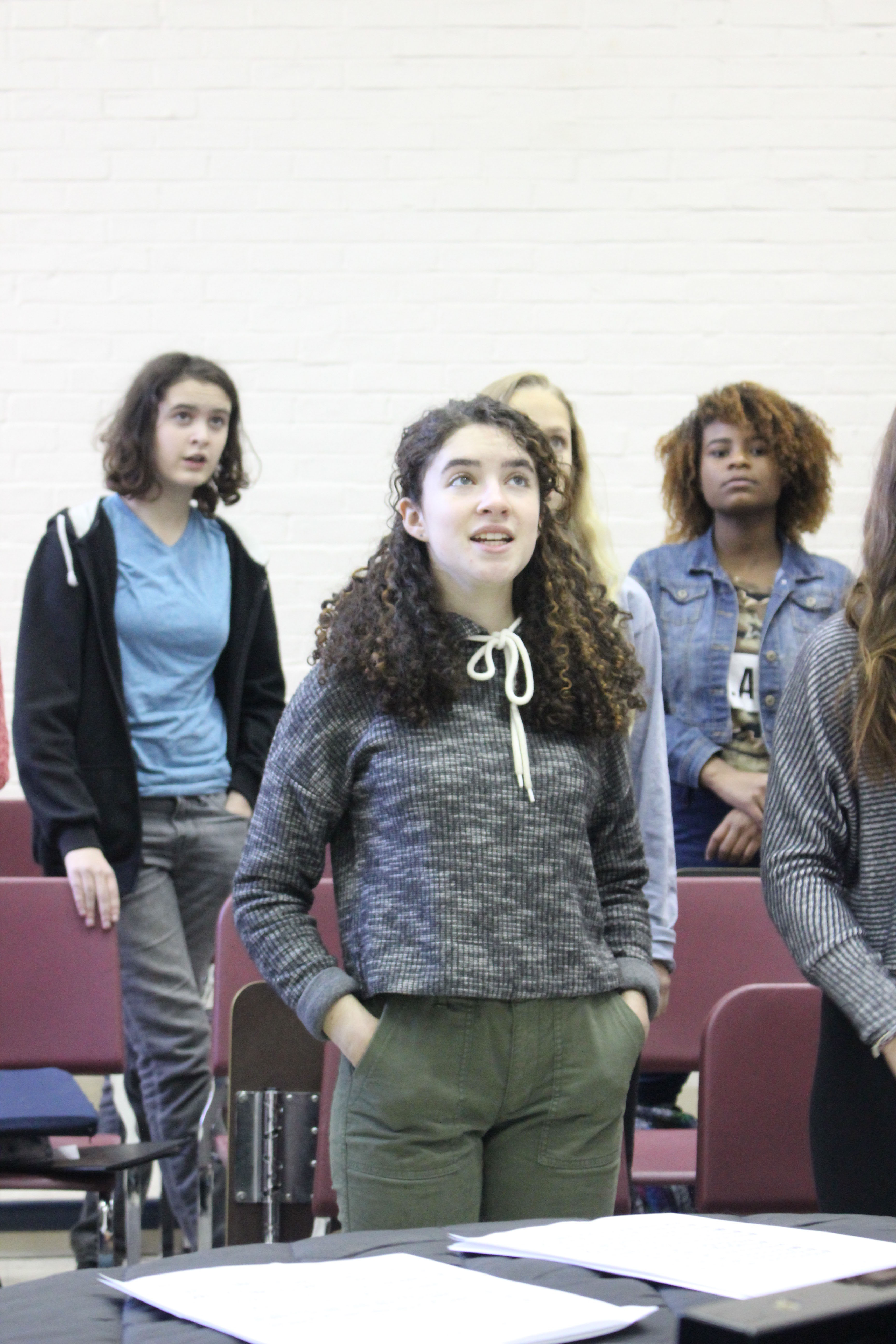 The anticipation builds, as friends and families cheer for the Hurricane Singers and the next group of performers waits for a turn on the stage. They sit, restless, in the fuzzy red seats of the sweltering auditorium, chattering away about whatever it is that goes through their minds.

It is the night of the Combined Concert, where Symphonic Orchestra, Wind Ensemble, and all three choral groups perform for each other and their parents. The Hurricanes take their final bow, and clear the stage for Concert Choir.

The Concert Choir set includes “Bottom of the River,” by Delta Rae, “Stay,” by Rihanna, and “Valerie,” by Amy Winehouse. All three of these pieces feature dazzling soloists and bring standing ovations from the audience. Concert Choir has the most pop-heavy set list of the three choral groups performing that night and it is clear that they are enjoying themselves.

Todd Fruth, director of the choral program at ARHS, describes Concert Choir as “a vocal ensemble open to all students at ARHS regardless of prior experience. It’s a great place to build fundamental musical skills in a safe environment.”

Unlike the other two choral groups at ARHS, Concert Choir does not require an audition to join and is open to students in all grades, whereas Hurricane Singers and Chorale, the auditioned groups, are open only to students in grades 10-12.

Isabelle Bouvier is a student at ARHS and a member of Concert Choir who takes the class on the days that she doesn’t have Health class. This was not the only reason she joined the group, though.

“I joined Concert Choir because I absolutely love music and singing and I wanted to join either Chorale or Hurricanes next year and Concert Choir is a step towards that,” said Bouvier. When asked about her favorite part of Concert Choir, Bouvier said that “so many of the people in Concert Choir enjoy making music and are there because they want to be there.”

Bouvier’s comment about the community of Concert Choir resonated with others as well. Grant Powicki, also a member of the group, noted that his “favorite part is definitely learning new stuff, and the community and people that you’re there with that share the same goal.”

Similarly, Eliza Carson, a past member of Concert Choir and current president of the Hurricane Singers, remarked that “I just loved singing with my friends!”

Powicki, Bouvier, and Carson were all members of ARMS Chorus during their time at the middle school as well, and found that Concert Choir is very different from their experience in the ARMS Chorus.

“As you work your way up to Concert Choir, it slowly narrows down to people that really want to sing. The dedication is different,” said Powicki.

Bouvier also said that “Fruth has high expectations of us and he really works with us to meet them. And we do more complex music.”

A lot “is expected of you as a high school student” in terms of commitment, reliability, and skill, said Carson.

This year, Concert Choir consists of 36 members, the most of any of the three groups and a record high in recent years. This is a testament to Mr. Fruth’s dedication to the program. He started an annual all-chorus concert that takes place in December with the goal of inspiring middle school chorus-goers.

“There are several reasons why the program benefits from a robust Concert Choir. Most of the students accepted into Chorale and Hurricane Singers come from Concert Choir; it serves as an excellent feeder for the auditioned ensembles,” said Mr. Fruth. “A large number of students in each section means that the group can perform music with more parts and achieve richer harmonies. And an impressive sounding Concert Choir is a great recruitment tool for eighth-grade choir students.”

All 36 members of the group this year are in ninth grade, but Mr. Fruth hopes that this is something that will change in the coming years. “In the future, I would love for Concert Choir to draw students from all grade levels,” said Mr. Fruth.

As for how this hope of his might be achieved, Mr. Fruth said, “In future years, as the auditioned ensembles near their capacity, it is possible that more students may not get accepted to Chorale and Hurricane Singers on their first try. I am hoping they can return to Concert Choir and become leaders in their sections, and serve as mentors to ninth graders.”

As for Bouvier and Powicki, they have big plans for the years ahead. Bouvier will be an alto in Chorale, the mixed-voice group, and Powicki is taking a year off before auditioning to hopefully also join Chorale in his junior year.

“I have been so impressed by the talent of all of the students in the group this year, and I have enjoyed watching their growth,” said Mr. Fruth.