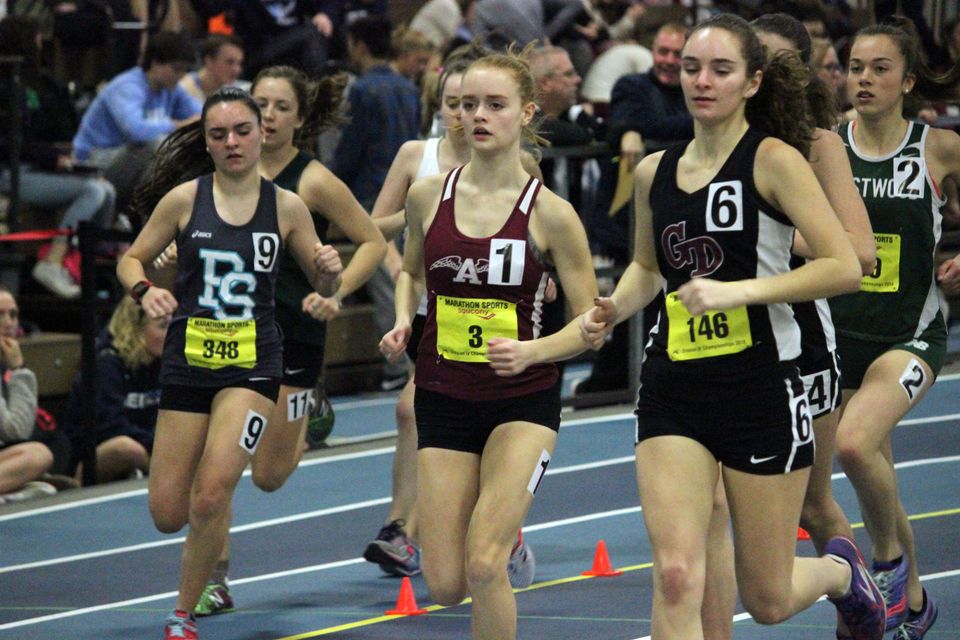 The indoor season was a mixture of success and setback, but with a season that ended with five people attending New Balance Nationals, there was a positive end to the season.

On the girls team, Sophia Jacobs-Townsley had a spectacular season, in which she was Amherst’s sole female representative to New Balance Nationals.

“I was disappointed in my race in the 5K, as I went out too fast, but that helped me pace my 2-mile race more strategically,” said Jacobs-Townsley.

She ran a 17:42 in the 5K for 11th place, and then proceeded to run a 10:51 2-Mile the next day. “The two mile might have been my best race. So few people qualified and I entered and they let me in, and I ended up getting fifteenth.”

The girls’ team also had numerous other victories. Sophomore Julia Hopley qualified for All-States in the 1000m, and sophomore Isabela Shepard won the 600m at the Western MA Championship race. Additionally at Western Mass, the girls 4×800 won 1st place, and the 4×400 won second.

In an unfortunate turn, Jack Yanko, Amherst’s star cross country runner, became injured after a torn hamstring midway through the season. However, Yanko will hopefully be able to compete during outdoor. “It’s all good now,” is what he said when asked about the current state of of his injury.

Regardless of injuries, the boys’ team was still able to send four athletes to Nationals to compete in the Sprint Medley Relay (SMR.)

Spiegel, one of the 200m runners, described Nationals as “operating smoothly, and well-organized,” and expressed pride and and accomplishment for himself and the team.

“I’m proud of the effort the team put in,” said Foucault, who is one of the captains of this year’s outdoor track team.

The boys track team also has some ambitious goals for the season. Personally, Spiegel wants to continue running the 200, and aims to run in the area of a low 22-second race.

He also plans on working towards jumping 22 feet in the Long Jump. Foucault also plans on making a new personal record in the 800m, which has been one of his signature outdoor events since his freshman year, when he was almost on the National record-breaking 4×800 team.

Coach Thompson plans on a successful outdoor season for the entire team.

“We would like to go to Nationals again for outdoor; with any relay we can get in,” he said, specifically citing the possibility of getting the 4×100, 4×200, SMR, potentially the Distance Medley Relay, and an event known as the “Swedish Relay” all to Nationals.