Boys’ bball: ‘the grind, the process’ so fun 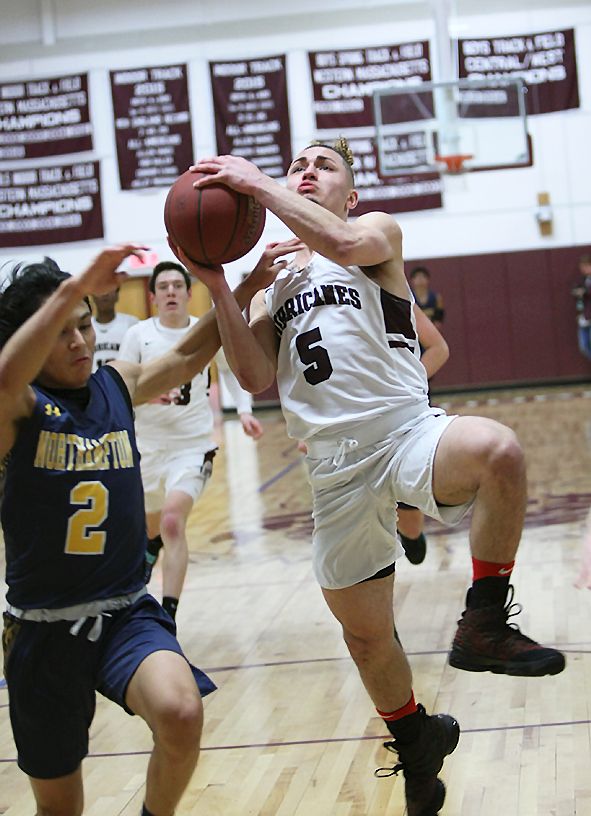 After a thrilling season, the boys’ basketball team lost in the semi-finals to Putnam 55-57, finishing the season 13-9.

“The grind, the process, getting better is so fun. [There is] something about it,” he said.  “It is so easy to get better, and all you need is a ball and a hoop and you go at it.”

After an offseason of hard training Rietkerk boosted his points per game average by nearly 14 points this winter.

However, he didn’t achieve all his goals. “I wanted to get back to the finals,” he said. “We were really close, not quite though.”

Senior captain Meikyle Murray, after being hurt for the majority of sophomore year and being a part of the team that lost to Central in the finals last year, was also ready to get back to the finals.

“My personal goals were to win the whole thing, and [my] team [goals were] to get back to Western Mass,” he said.

Their season started with a concerning loss to rivals Northampton.

“Some games we shouldn’t have lost,” said Rietkerk. “It happens when you have a young team.”

After that game, they won six straight during that stretch Rietkerk averaged 15.3 points per game and Murray averaged 18.2. With a team of only four seniors the captains really had to step up.

“[We] have to make sure everyone is doing what they [are supposed to] do during practice and during school,” said Murray.

“He exceeded all expectations honestly,” said Rietkerk. “How he didn’t make varsity sophomore year made him go harder to prove himself junior year.”

Averaging 11 points per game in his first year on varsity basketball, Roman played a pivotal piece on offense and defense.

“I certainly think I could have performed better and helped the team better. Being part of the the big three with Kyle and Tate. It’s one of the best seasons I’ve ever had, I will never forget this group of guys,” said Roman.

Seniors Rietkerk and Murray expect to be playing basketball in college, “I think I’m playing in college next year,” said Murray.

“Right now I have gotten into a bunch of schools, I am talking to the soccer coach at Endicott about playing for them next year. I will try to walk on to basketball as well.”