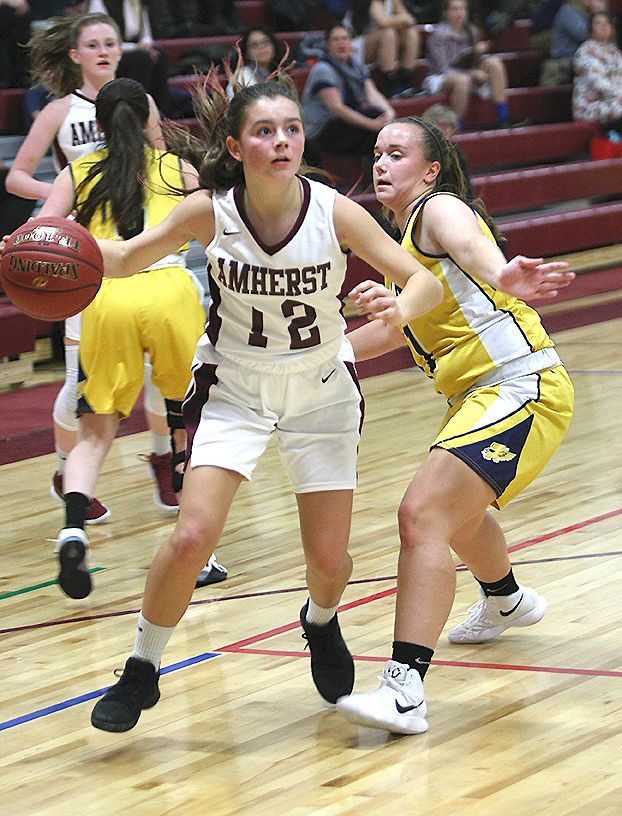 Reaching playoffs for first time in six years, the girls’ basketball team is excited to see where the future leads their team.

They finished the regular season 8-12, improving on last season’s record 3-17 before losing in the first round to East Longmeadow.

The girls met their goals for the season. “[We wanted] to make it to playoffs,” said sophomore Erin Klaes. “We have a very young team and were still learning.”

Out of the 11 girls’ on varsity, eight were freshman, with three of them starting every game. Freshman Petua Mukimba broke out and averaged 9.3 points per game. The freshman used her height and strength to dominate in the post this season.

Another freshman starter, Mayouri Yath, averaged 5.1 points per game. She was a critical part of the young Amherst backcourt, with her and other freshman Maddie Shea controlling the tempo in crucial games.

While Amherst boys’ basketball home games attract a larger audience than the girls, this in no way means the girls’ games are less exciting.

“When the crowd gets into the game and you feel the energy being given off it pumps me up,” Shea said. “I wish people would come to more games and come support the girls’ as well as the boys’ team.”

“We can actually do stuff. We made playoffs and went from 3-17,” said Klaes.

For different players, different aspects of basketball draw them to the game. For Klaes, shooting is her favorite part.

“I love all of it, [but] my favorite part is shooting. Whenever I make a shot I want to play good on defense; it sets the tone for me,” she said. She also made 99 field goals as well as a staggering 42 three-pointers.

All varsity girls will be returning next year and they hold high expectations for next year’s season. For Shea, her message for the high school is one of high standards.

Winning a championship is harder than it looks on the surface. But possessing the iron will to want to win is a trait most commonly found in championship teams; this girls’ team has just that.