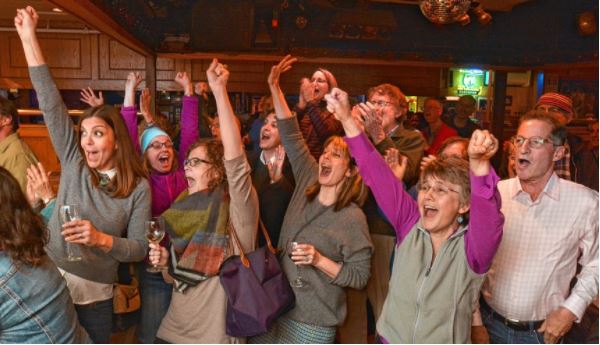 On Tuesday, March 27, Amherst residents voted 59 to 41 percent to replace Town Meeting with a new form of government.

In August 2015, a group of Amherst citizens collected 3,500 signatures on a petition asking for a Charter Commission to be put on the ballot.

The intent of the proposed commission was to evaluate Amherst’s current form of government (a representative Town Meeting system with a Select Board and a town manager) and to explore areas in which possible changes could be made.

In May of 2016, Amherst voted 60 percent in favor of the commision. The commission submitted a preliminary report at the end of July and a final report two months later.

The final proposal suggested that Amherst change its government to a town council system wherein 13 elected representatives would replace Town Meeting as a decision-making body.

According to the proposal, the council will meet monthly to write and pass bylaws, appoint the Planning Board and Zoning Board, and make other important decisions on behalf of the town.

In the months following the announcement of the commission’s final proposal, opinions among Amherst residents started to solidify.

A series of public debates, editorials in The Daily Hampshire Gazette, and lively social media campaigns disseminated the respective points of view across town.

As election day approached, the Yes and the No sides each mounted substantial door-to-door campaigns to inform and persuade voters.

Tom Fricke, ARHS social studies teacher, and one of the nine members elected to the original Charter Commission, was a strong voice in favor of the proposed charter.

Mr. Fricke said he was encouraged to run for a seat on the commission because he didn’t have a track record as being strongly on one side or the other.

Once on the commission, Fricke found that it was divided, but the commissioners were collegial, respectful, and consensus oriented rather than close-minded.

“We had to agree to disagree,” said Mr. Fricke. He described the fundamental difference between Town Meeting and the proposed charter as a question of preference in terms of accountability.

“The current form of government puts priority on a small group, with voters providing input only through the Select Board. There are some competitive Town Meeting seats, but by design, if you run, you will get elected,” said Mr. Fricke.

Members of Town Meeting are not asked to consult with their precinct-members; rather, the theory is that a selection of 240 people will by nature represent the full spectrum of Amherst interests.

By contrast, the charter requires that the council members hold quarterly listening sessions to give Amherst residents an opportunity to express their concerns.

In the current system, members of Town Meeting are required to approve deny or refer items on a given warrant the day that they are introduced. Mr. Fricke noted that the charter provides for more deliberation. “‘Yes, and’ or ‘no, but’ answers are possible,” said Mr. Fricke.

He added that “there is a structure [within the charter] wherein deliberation over time is necessary.” He believes this will create a larger margin for change and revision.

Equally strong on the opposite side was ARHS college counselor and former Town Meeting member of 18 years, Myra Ross.

Ms. Ross took issue with many aspects of the charter, characterizing it as “anti-democratic” and “a bad fit for Amherst overall.”

While on Town Meeting, Ms. Ross appreciated the accessibility of representational democracy. “Right now it’s pretty easy to get involved in town government,” she said. “Town Meeting has much more of an opportunity to accurately represent the demographics of this town.”

Ms. Ross was worried that a change in government would disrupt the tradition and charm of Amherst’s small-town nature.

She was also concerned about the transfer of the “power of the purse” from 240 Town Meeting members to 13 councilors, feeling that a concentration of power in the hands of a few could leave the town vulnerable to special interests that may not represent the town as a whole.

Although Ms. Ross believed that Town Meeting could be improved, and admitted that the charter could be more efficient, she said, “Democracy is not necessarily efficient, and it’s not always pretty, but it’s the way it is.”

Not quite so, anymore.

The charter will be adopted in the Spring of 2019. Until then, Town Meeting will still govern Amherst.