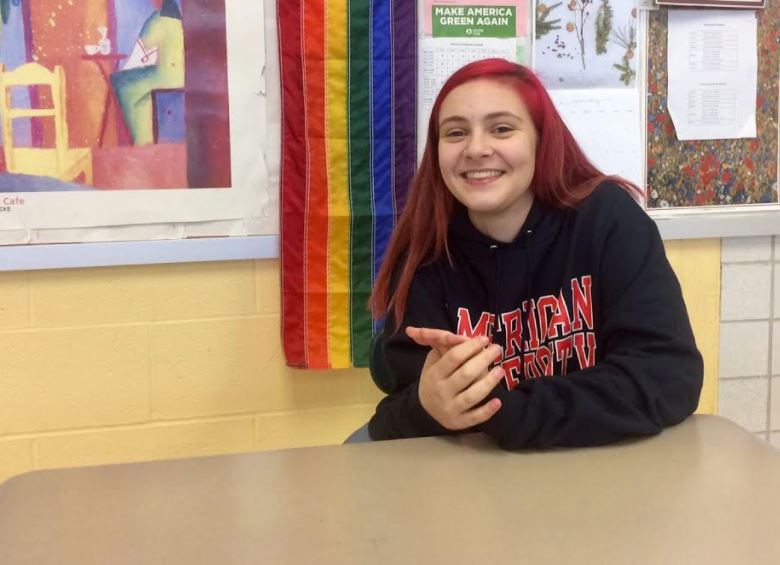 One day senior and SAGA (Sexuality and Gender Alliance) president Abigail Morris was walking through the math hallway at ARHS, when she heard someone say something along the lines of “That’s gay, bro, don’t rape me.”

She quickly turned around and said, “That’s not cool!” The boys apologized and then walked away.

Some people are as bold as Morris and are willing to call out homophobia, but for others, hearing slurs toward their sexuality leads to hurt feelings, depression, and even self-destructive behavior.

Of those students, gay or lesbian high school students were three times more likely to be raped, and about a third had been bullied on school property.

They were also twice as likely as heterosexual students to have been threatened or injured with a weapon on school property.

More than 40 percent of these students reported that they had seriously considered suicide, and 29 percent made attempts to do so in the year before they took the survey.

The findings were first issued in a report released by the Centers of Disease Control in August of 2016, on the health risks faced by lesbian, gay, and bisexual high school students.

The data comes from the first nationally representative survey, conducted among more than 15,000 students in grades 9-12 in 2015.

According to The New York Times, Debra Houry, an emergency medicine physician who directs the C.D.C.’s National Center for Injury Prevention and Control, said “the numbers argue for more comprehensive intervention and prevention programs.”

In a school as seemingly progressive as Amherst, homophobia is less obvious and its effects aren’t as damaging as they are often reported to be nationwide. Still, many students and staff members said they think homophobia is still present.

English department head Sara Barber-Just, who teaches LGBTQ Literature, said she has heard homophobic slurs used many times in her life, and that she always has a negative reaction.

“My metaphor is that I have a sort of ‘invisible list’ with people’s names on it in my head. Once they say or do something homophobic I talk to them first and try to help them understand why it’s hurtful,” she said. “I give them time. In some cases, quite a bit of time. But if they do it repeatedly, I cross them off my list. I lose trust in them.”

Many people I spoke to who expressed homophobic views admitted to absorbing these beliefs in their home. A junior at ARHS said he learned much of his homophobia from his family. His parents and his grandparents are opposed to gay marriage, so as a result, he is too.

“I was was raised Catholic,” he said. “My grandparents were especially against it. One day, there was a wedding of a family friend. When my grandmother found out there was going to be a gay couple at the wedding, she banned me from attending.”

Though he admitted to knowing and liking gay people, like Ms. Barber-Just, he nevertheless said he uses gay slurs and might feel differently if a friend admitted to him they were gay.

He said he has no known gay or lesbian friends or family members, and said that he thinks “it’s a choice.”

“I don’t hate [gay people],” he said, but acknowledged being uncomfortable with the topic.

All that said, he said that when he’s “face to face with a gay person” he treats them with respect.

Morris said she has experienced homophobia and gay slurs more than once at school. Morris says it’s mostly use of the word “faggot” and the phrase, “That’s gay.”

Morris believes that teachers “not saying anything” makes it worse. “Some teachers get uncomfortable, and they don’t do anything about it,” she said. But she had high praise for those who intervene.

Morris said that whenever she hears or sees homophobic behavior she doesn’t hesitate to call it out. She said that most of the time, “[the offenders] get scared and then they stop or apologize.”

Morris believes that in the last few years “the political climate has made homophobia more acceptable” and that interrupting it is more important than ever before.

Ms. Barber-Just and Morris agree that positive exposure and education are the two most important things to end homophobia. Ms. Barber-Just said that the LGBTQ Literature class, open to any eleventh or twelfth grade student, is a great class for getting educated. “Once people take it, they are usually a lot more willing to confront anti-LGBTQ bias,” she said.

Morris said that seeing openly gay teachers had “a huge positive impact” on her. “Seeing normal gay people making money and having successful lives has been very inspiring and eye opening,” she said.

To help challenge homophobia even more, SAGA plans to hold a teacher workshop on how to deal with homophobia in the classroom.