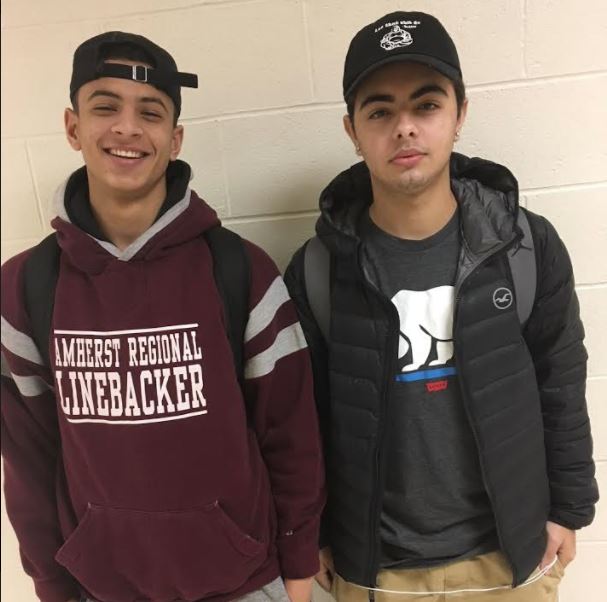 Paulo and Alvaro, Brazilian cousins who have found a home in Amherst and at ARHS.Photo: Sam Brainin

I can’t move. Even if I wanted to. I’m perfectly content right here, even though my first priority should be my defensive duties. I stand mesmerized watching this yellow shirt move effortlessly across the turf field. I don’t even see the body, just the fluorescent yellow Brazil soccer shirt becoming brighter and brighter as the warm July sky around us grows darker and darker.

He plays a quick pass to a teammate wearing a gray tank top, the two of them combining as they have so many times already during the practice.

He then receives the ball back, surrounded by three or four defenders. He fakes a move one way and spins by. And he scores. Many times.

When the practice is over, we all gather up our bags, but I head over to meet the two who tortured my team all game: Paulo and Alvaro.

In a country of more than three million square miles, the cousins were born in locations ten minutes away from one another.

The two have been raised on a diet of futebol, the Portuguese word for soccer. “Soccer means everything to me. Soccer is my life. I hope never to stop playing soccer until I die,” Lyra said.

Indeed Brazil’s soccer history is legendary. Brazil is the only country to have competed at all 20 FIFA World Cups, beginning in 1930, winning five, the most of any country, and finishing second two times.

Brazil won its first World Cup in 1958 in Sweden when a 17-year old Pelé stole the show with breathtaking goals. He went on to win three World Cups in four attempts and, in the process, cemented his legacy as arguably the greatest soccer player of all time. Brazil will compete at the 21st World Cup next summer in Russia.

Silva agreed. “I’ve played for my whole life. It is my life,” he said.

In Brazil, soccer is religion, and it most likely always will be. Soccer is played on beaches and in alleys, on fields, and, as Pelé did as a kid, with balled up socks and rolled up newspapers in the place of balls.

“Everyone in Brazil, like me, wishes to be professional,” said Lyra. “Some get this and others not. In Brazil soccer is the biggest sport.”

Soccer was brought to Brazil by a Scotsman, Thomas Donohoe. Donohoe had moved to Brazil in 1893 and worked at a textile factory. He organized the first soccer game in Brazil in 1894 next to the factory where he worked in Bangu, a district of Rio de Janeiro. Brazil never looked back.

Developing a flair for treating the game as an art more than anything else, jogo bonito, the beautiful game, has become a trademark of the largest South American country.

In Brazil, soccer is a means of expressing oneself. It’s a way of being distracted from other troubles and a way to participate in an activity that you love with your best friends. The Brazilian culture is soccer.

Upwards of 10,000 Brazilians play professional soccer globally. Soccer greatly influences politics and it is a tradition like no other.

Elections for political office often take place in the same year as World Cups and World Cup fever can be utilized by candidates in their campaigns.

The bottom line is, when the World Cup is on, the televisions are on, and everyone in Brazil is around one.

For Lyra, it has been a transition between soccer in Brazil and Amherst.

“Here you are stronger with your body but in Brazil there are more skills. You don’t need to have the special shape to play in Brazil. In Brazil you play more individually,” said Lyra.

Lyra played this past season on the varsity team, racking up seven goals and three assists, including winning goals against East Longmeadow and Minnechaug.

“Soccer here is really good and I like playing in Amherst because we have a lot of good players. I feel good playing here,” said Lyra.

Soccer, understandably, has been a key aspect of Paulo and Alvaro’s relationship. “We have different opinions about teams and players, but we like many of the same players also and we watch soccer games together. So soccer is good for the relationship,” Silva said.

“Our relationship is really good,” Lyra added. “Since I was young, we were friends.”

“Everything is different,” Lyra said. “Here you have more security when you go outside and have more opportunities to have a better life. But Amherst is so cold and Brazil is too hot!”

Lyra and Silva came to live with their aunt in Amherst.

“My dream was to live in the United States, so it was not difficult for me,” Silva said. “But I miss my family. Amherst is how I thought about the United States: the school, the people. Everything is awesome.”

Leaving behind loved ones naturally has proved to be a challenge for Lyra.

“I had a lot of friends in Brazil and to be far away from them is hard. Also with my family, I miss them a lot. I won’t forget them,” Lyra said.

When soccer is boiled down to its essence, it’s more than a game, or a sport, or the money. It’s a tradition, a ritual, a routine.

In America we so often think about money when we think about sports. But without considering money, soccer is a game of emotion, and this is none more evident than in Brazil.

Lyra and Silva bring the Brazilian soccer, a soccer with rhythm, passion, and beautiful goals.

I watch as Paulo Schultz Lyra and Alvaro Schultz da Silva play another combination play leading to yet another goal. I could barely keep track of os primos, the cousins, that first summer night I met them.

One second they’re in the middle of the field and the next they’re celebrating a goal.

Maybe you’ll catch a glimpse of them if you’re lucky on the field.

“I want to be a sports journalist focused on soccer,” Silva said. “I was born playing soccer in Brazil. It is contagious. Soccer is magic.”