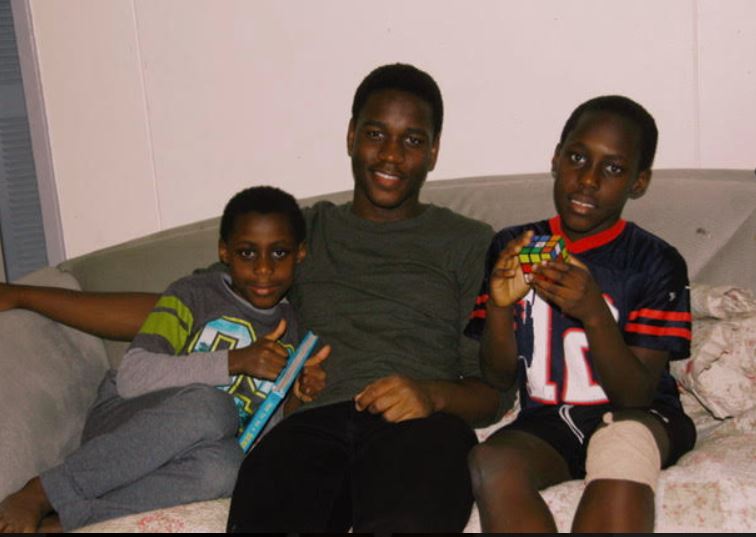 But some have less flexibility; they are needed at home to watch younger siblings, sometimes every day and for hours at a time, with no income attached.

The pros are a sense of pride in their responsibility and a joy that comes from family bonding, and the cons can involve difficulty with time management and limitations to social and academic experiences that happen in after school hours.

While interviewing Banda by phone, before he cooked dinner for himself and his siblings, I was able to hear his brothers chattering and joking in the background.

Banda talked about his responsibilities, downplaying his role.

“I don’t do much really. I make sure they’re watching the right TV, are done with homework, and are eating,” said Banda.

Though Banda brushes off his duties, he is home by 5 or 6 p.m. at the latest every night of the school week to make dinner and help his brothers with homework.

Banda’s mother Ella is a student at UMass and is out at classes and studying until 9 p.m, and Banda’s father just moved to Amherst from Botswana.

Both of Banda’s brothers Chisomo, 9, and Chanju, 6, stay in after-school programs when school gets out, but then arrive home at six.

In his after-school time, Banda manages to be a co-president of the International Students Club and a member of the Senegambian Scholars program as well.

He maintains an active school life and social life, hanging out with friends after school, all while juggling his responsibilities at home.

Banda misses out on some after-school events because he needs to be home.

The biggest inconvenience for Banda is that he is not able to study at the library as often as he would like.

“I like to work in the library for the atmosphere,” he said. Studying at home is very difficult while his energetic brothers are around.

Banda acknowledged that cultural expectations affect his role as a caretaker.

“I am the oldest, so I am expected in the house to watch after them without someone telling me,” he said. “It’s just a thing in my country. If you’re mature and a teen with children under you, you have responsibility and authority over them.”

Recently, Banda’s father has joined his family in Amherst. Banda’s uncle lives with them as well. Banda still acts as main caretaker to his brothers, even when the older men are around.

Banda resorts to creativity when his brothers are resisting doing chores.

“I made up a game where sweeping [the floor] equalled ten points, and dusting the couch equalled five,” said Banda. “We ended up cleaning the house together without them whining or complaining. It was actually fun.”

Banda made the deal even sweeter with a prize for the brother with the most points, a mini muffin.

Banda doesn’t just create fun competitions to clean the house; he also unplugs the TV to make sure his brothers are doing their homework.

When that is done, Banda has no formal “storytime thing.” He said his brothers usually fall asleep by 9 p.m. on their own.

“Right now I do his laundry, clean our room, and wash the dishes,” he said. “He’ll take some of these chores because there is nobody else there to do it and it’s his turn to step up.”

He compared leaving the house and his brother having to assume more responsibility to a soccer player leaving a team.

“In soccer, you have an 11 man team in soccer. There’ll just be one less extra man, the team will still function but not as efficiently,” he said.

Banda is excited about moving out because he will have more freedom.

He does feel that sometimes his role as a caretaker eats into his time and other times he’d just rather not have to cook.

Banda looks forward to being able to make decisions for himself without worrying about his younger brothers.

All in all, Banda said he has learned a lot.

“I’ll kinda miss [being a caretaker]. I’ll know that I’ve been influential and part of someone’s childhood. I’ve been a positive male role model, especially in the absence of my father,” he said.

“I’ve been the one they look up to and subconsciously or maybe even consciously they try to be. It’s so cool,” added Banda. “I’m glad I’ve been a positive, loving sibling whom they can always count on.”