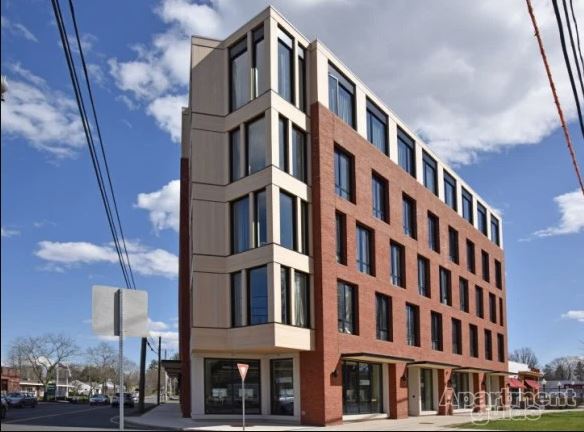 Looking down the long street, there would have been lines of one and two story buildings, made of brick and wood.

The blue sky cast shadows of trees onto the roads.  The downtown, bookended by Amherst College on one side, and the University of Massachusetts on the other, drew many students to the town’s shops and restaurants. Fifteen years later and these same streets are vibrant with life.

Students, residents, and tourists run in and out of shops, restaurants, and venues. The theater still stands, yet with a new liveliness. Glass panels let light shine through into the bar at the newly expanded Amherst Coffee, and renovated screens and seats make viewing in high demand at Amherst Cinema. The number of restaurants has increased.

The downtown has transformed as a result of ambitious developers with the backing of the town’s planning board, which determine whether new projects meet zoning laws and will be beneficial to the town.

Archipelago Investments LLC is behind numerous projects that the town planning board has approved.

Stephen Schreiber, a UMass architecture professor, serves as chair of the planning board.

Schreiber emphasizes that conservation efforts in Amherst, and land privately owned by the colleges, makes room for development tight: “most of Amherst is protected either by being owned by the university or is conservation land.”

However, he explains, it is easiest to build where infrastructure such as sewers, pipelines, and roads, exists. And this infrastructure is in the downtown. “I think everyone in downtown agrees,” he said, “that the stretch between the post office and, say, Bertucci’s area is underdeveloped. It’s all one story, you know, suburban, sort of strip mall type buildings.”

Little disagreement exists about whether Amherst should continue to develop, but not all favor the same direction.

Maurianne Adams, a retired UMass professor, lives near the strip of land that Schreiber notes, and thinks that many involved in Amherst’s planning and politics do not recognize its importance as a “local historic district.”

Adams, who  has participated as a member of Town Meeting and an active citizen advocating for her vision of Amherst, worries that downtown development will disrupt the balance of Amherst’s “three potentially competing priorities: business development, historical residential neighborhoods, and conversation green- and farm-land.”

How much the downtown development will veer from Adams’ priorities remains to be seen.

In 2013 and 2014, the planning board approved three new projects, all multistory buildings that mix residential and retail spaces.

Two of the projects are completed, while the other is under construction. A lot that used to contain the Loose Goose Cafe, and other low-story businesses, now has been transformed. Five story buildings  tower over smaller, older structures. They consume vacant land and are replacing underdeveloped strips.

According to Schreiber, the apartments are attracting many new residents to the downtown, which has brought in hundreds of thousands of dollars of new tax revenue.

The buildings may bring in revenue, but Adams has other concerns:  “In many people’s view, the five-story buildings at Kendrick Place and One East Pleasant are out of scale for the more modest and small-scale streetscape of Amherst.  We believe that there can be development without it’s being architecturally out of scale.  This is a matter not only of ‘development’ but also of aesthetic taste, on which opinions understandably differ.”

According to  Sarah la Cour, an urban planner and executive director of the Amherst Business Improvement District (BID), the construction in the downtown has two goals: to bring in residents, businesses, and income, and to revitalise the area.

The BID’s main goal, according to its website, is “to improve the Amherst downtown through events, beautification, marketing, and special projects.”

“We need to grow because the university is growing, and they can leave us behind,” she explained, “or we can be in conjunction with them, and gain from their growth. You already have these people here, why not engage them in your community?”

Like Schreiber, la Cour is pleased with the progress and changes in town. “I love the direction we are going in, here in downtown, and our village centers,” she said.

Although, in general, the downtown’s renovations have received the approval of the planning board and some of the town’s residents, others are not pleased with the changes.

As Schreiber noted, “You can’t do anything in Amherst without a controversy.” According to la Cour, the  controversy is about whether the town retains its small, quiet, historical feel, or develops into a bigger, more active, and modern community.

Those opposed to the development “want us to be a quaint little New England village that we were a century ago,” said la Cour.

However, la Cour argued against that idea, “We aren’t a quaint little New England town, we are the home of the state’s flagship university campus.”

Adams is concerned that focusing on Amherst as a university town ignores the interests of families. She wants to preserve Amherst’s residential and family friendly qualities:

“A major challenges is how to create affordable rental as well as ownership housing for lower and middle income families as well as for students, given the enormous student rental market? It is a challenge to maintain a balance between these two kinds of housing needs so that Amherst doesn’t become an ‘off-campus’ student community.  We are struggling to keep Amherst a town where families live and work and interact with students who also live and work in town or on campus.”

Students make up about half of the population of Amherst. Schreiber pointed out that these students tend to walk, opposed to other means of transportation. He explained that having stores for the walkers to dip in and out of could be a huge boost to businesses and a convenience to students. He identifies the strip from the rotary to the UMass campus as an area that should be developed more.

Adams is less sure. “It’s a challenge to create a viable downtown for entertainment and shopping when so much shopping is done online,” she said. “We all want more vitality in the downtown, but those ‘wants’ might contradict plans that property owners have to maximize the value of their properties.”

Adams also feels that Kendrick Place and One East Pleasant amounts to student housing, and she questions its impact on Amherst. “I didn’t oppose off-campus student housing, but I did believe that that specific ‘Gateway’ location would worsen the huge amount of student traffic already walking from Southwest into town,” she said.

Besides students, the BID and Planning Board hope that downtown development will attract more permanent residents to the town.

“We have a lot people who want to retire here, and they don’t want to live in a suburban house, they want to be in town, where the activities are,” explained la Cour.

While the shape of Amherst continues to evolve it is still unclear what further development will occur. More certain is that, whatever happens, it will provoke controversy.