JUULing in and out of school: e-cigarettes ubiquitous at ARHS 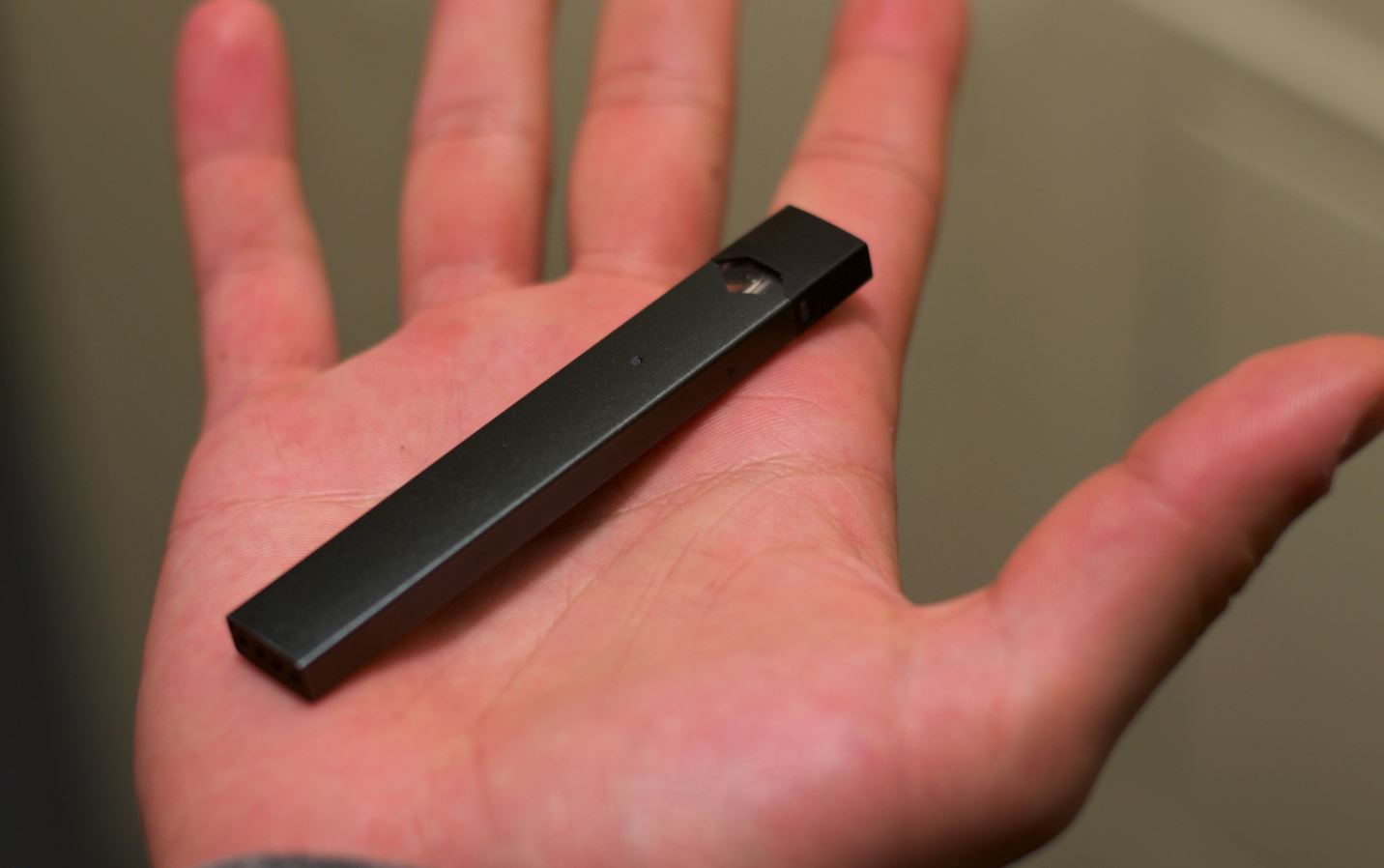 In the past few years, the popularity of “vaping” nicotine, or marijuana, has exploded.

The JUUL—recently described by NPR as “an e-cigarette that can vanish into a closed fist” given its similar appearance to a flash drive—produces little smoke and has no detectable smell, making it easy to use, even in school.

In fact, e-cigarettes are currently used by youth nine times more than by adults.

I spoke to a number of students who “JUUL” or vape, and very few were fazed by the health risks of ingesting nicotine at a young age.

One anonymous senior whom I’ll call “Mike” said he used to smoke cigarettes but moved to JUULs.

“It’s a fun alternative and my friends do it,” he said.

Mike uses his JUUL at home, school, while riding to school, in the ARHS parking lot, at parties, in the hallway, in classes, and in the bathroom.

“You get a buzz; that’s why everyone does it,” he said. “Nicotine is addictive.”

Mike first JUULed last year around June. “I continued because I like it and I’m honestly addicted, plus all of my friends do it,” he said.

Mike bought his first JUUL in June for $80 at the time in Windsor, Connecticut, but then later bought another for $40, after his first one broke.

Along with the original cost, Mike also spends $5 per JUUL pod which lasts about a week.

Though e-cigarettes have reduced smoke and tar, one pod contains as much nicotine as a pack of cigarettes.

Mike has never gotten in trouble for JUULing on his own time or in school.

“I believe it’s a bigger deal in other schools. My friends also JUUL in school and they have never gotten in trouble either,” he said.

“I don’t fear getting caught. I’m eighteen so if I did, I’d just go to another state and buy [a replacement].”

Both of Mike’s parents know that he JUULs, yet they haven’t stopped him.

“My parents think that JUULing is stupid but they don’t stop me because they know I’ll find a way to JUUL even if they did,” he said.

When asked if Mike will continue JUULing, he said yes. “I will absolutely continue,” he said. “I’m addicted.”

Another anonymous junior, “Lily” JUULs because it feels nice. “I love the buzz you get from it,” she said. “When it hits you all at once, it feels insane. At first you feel like you entered an alternate universe, and then you feel bubbly, happy, and a little dizzy.”

Lily first tried JUULing over the summer in Indiana because another girl had the e-cigarettes. “JUULs weren’t popular yet in Amherst so I said ‘Why not?’ and tried it,” she said. “Once I got back to Amherst in the beginning of the school year JUULs were huge, so I continued.”

“I have never gotten in trouble for JUULing, but I’m scared someday I might get caught,” she said. “But if you’re smart it’s not hard to conceal it.”

Lily’s parents haven’t caught her either. “If they did, I have a feeling that they’d be quite disappointed,” she said.

When asked if she will continue, Lily said she thinks it’s probably just a high school phase. “I don’t rely on it and I’m not addicted, but I do it socially. I probably won’t JUUL my whole life, but then again who knows,” she said.

In response to the uptick in teenage vaping, especially JUULing, ARHS faculty and staff were called to an after school information session on December 12, led by Melinda Calianos of The Tobacco Free Community Partnership.

Calianos talked to the crowd about how these devices are used, what they look like, and the dangers of ingesting the substances they contain. The battery-powered devices heat a liquid—usually containing nicotine mixed with the chemicals propylene glycol and glycerin—which becomes an inhalable vapor.

According to Calianos, nicotine is a known stimulant, and she said students who vape report enjoying the “up,” “happy,” and “floaty feeling” they get which they say “focuses and energizes” them in the moment.

While studies have shown that teenagers using e-cigarettes generally have more respiratory problems, vaping is relatively new, so no studies have examined the long-term effects of the practice.

However, given that nine percent of adult smokers say they started smoking before the age of 21 and up to 38 percent of teenagers had tried e-cigarettes in 2016, Calianos is worried.

Tobacco companies make their products “sweet, cheap, and easy to get,” she said, expressly to lure in teens.

While Calianos said more high school students report vaping marijuana overall, I found many more who admitted to using JUULs during “school hours” to vape nicotine, partly due to the fact that teachers and staff can’t smell it.

“If anything, it produces a fruity smell,” said Calianos.

Even those who don’t JUUL said they see other students doing it or hear them talking about it on a regular basis.

I spoke to two students who chose to remain anonymous but whom I will call Lisa and Dan.

Lisa said that she has seen JUULing in school “every day,” while Dan said he sees JUULing about “every other day” in one of his classes. “I see people JUUL in the bathroom, in my class, and in the hallways,” he said.

Neither Lisa nor Dan have strong reactions towards the individuals who decide to JUUL in school. “I don’t care that you’re JUULing; it’s your body, your choice,” Dan said.

Lisa felt similarly. “It doesn’t affect me. The negative impact of nicotine at a young age is their problem,” Lisa said. “It seems unnecessary though. You’re in school. I believe you should be focusing on things other than getting addicted to nicotine.”

Dan worried about the future effects of JUULing on his generation.

“They might regret it later in life because there aren’t [immediate] implications, yet our generation will be the ones who will be studied later,” Dan said.

I spoke with Principal Mark Jackson about his thoughts on the new trend of vaping and JUULing in school among many students at ARHS.

“Students vaping in school became an issue last year, yet the introduction of JUULs has enlarged the issue tremendously this year,” Mr. Jackson said.

The ARHS policy for vaping on school grounds? It’s prohibited.

“If a staff member discovers that someone has been vaping in school, the protocol is to [call or] bring them to the deans,” Mr. Jackson said. “The deans will then investigate the issue, conduct a search, and confiscate the device if necessary. Further consequences will be decided as well.”

When asked how many students have been disciplined for vaping in school this year, Mr. Jackson replied that it was “not a small number.”

“We are definitely paying closer attention to the issue. I believe that student use has increased,” he said. “I’m incredibly worried about how widespread teenage vaping has become.”

He said it is more common to find vapes containing marijuana than nicotine, “but then again marijuana has a stronger smell, making it easier to find.”

Mr. Jackson’s final message to students about JUULing or vaping was “don’t do it. Seriously, don’t. I understand that vapes and JUULs are marketed as cool but there are also serious consequences.”

“Take into account that you are the generation that these devices are being tested on before you take that extra hit of a JUUL,” added Calianos.