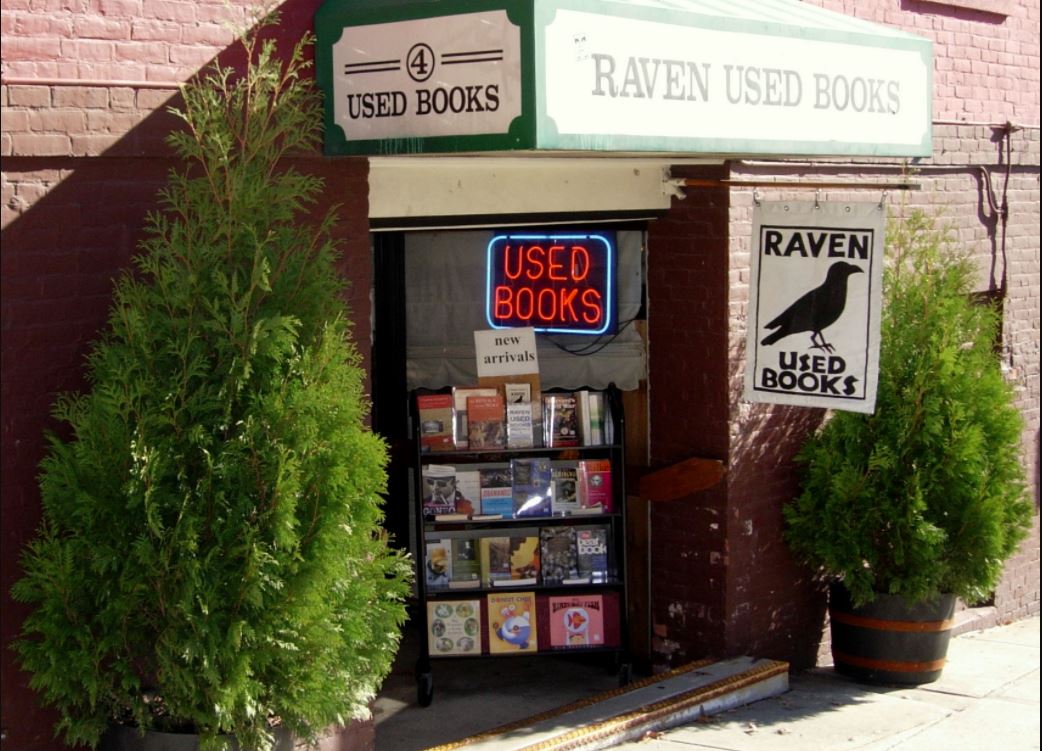 In the center of Northampton, just a ways off of Main Street, stands Raven Used Books, a literary establishment that has made this bustling area of Western Mass its home for over 20 years.

It has since become a Northampton staple that receives visitors from not just Massachusetts, but from all over New England.

Its longevity has been a testament to the value that western Massachusetts places on books, learning, and the desire to expand one’s realms of knowledge.

Raven Used Books was founded in 1993 by Betsy Frederick, a native of Gloucester, MA and a long-time resident of the Pioneer Valley. As an arts major who graduated from UMass Amherst, Frederick has always had a passion for reading but her ownership of Raven was largely accidental.

“I was an arts major but I didn’t have any jobs available so I was a cleaning lady,” said Frederick. “I ended up cleaning a book store in Amherst called The Albion; it’s no longer open. It sort of turned into Amherst Books on the corner there. Then they had a girl who was out sick for six months and they asked if I wanted to be the file clerk.”

“I kind of just fell into the whole business really,” said Frederick. “If I hadn’t been a cleaning lady I probably would never have run a bookstore.”  Her experience in this industry continued when she got a job at The Montague Book Mill, a historic and famous place in its own right.

In 1993 Frederick moved to Northampton and opened Raven Used Books with two friends of hers who were interested in opening a bookstore in the Northampton area. As she already had experience working and managing a bookstore, she was the perfect candidate to manage this new one.

Now, 24 years later, Frederick is a seasoned veteran when it comes to bookstore management. She said she still enjoys her work there and she has not grown tired of it despite the fact that she has been working there for over two decades.

“You know what’s fun about it? You learn something new everyday,” said Frederick. “If I were selling plastic forks, I wouldn’t learn that much everyday. There’s not much you can learn about plastic forks.”

Operating an independent bookstore does indeed seem to be far more compelling than being a plastic forks distributor.

The bookstore, with its signature black raven sign, is now a fixture of the lively and eccentric downtown Northampton scene.

Walking through its cozy and compact little aisles, it is easy to imagine all the stories of all the books that have made this place their home.

Even the name of the store has an interesting story behind it. “It took us a long time to think of a name. We could just not think of a name,” said Frederick. “My sister came up with the idea to call it Acme Book and Toaster, so we started to collect toasters around.”

Looking up, you can still see the remnants of the Raven’s toaster-collecting days, although they are not the highlight that they may have once been. Eventually, they decided that Acme Book and Toaster was a little strange and instead called it Raven Used Books, after the poem by Edgar Allan Poe.

Considering the rise of Amazon and other similar companies it is all the more impressive that Raven Used Books has survived for so long.

Frederick credits their continued success to their location and all the surrounding colleges. And some very loyal customers.

Over these years the store has amassed a very loyal following and there are many regulars whom Frederick associated with the store. Most of these types of people are known for always buying the same types of books.

For example, there was “the cookbook guy,” “the sci-fi guy,” or the Zimmers, who ended up returning all the books they ever bought when they moved away to Oregon.

“Everyday people come here and they’re like, ‘There’s no bookstore in my town,’” said Frederick. “People in Connecticut don’t have anything [like this] anymore.”