Pit bull owners speak: ‘there’s nothing quite like [their] love’ 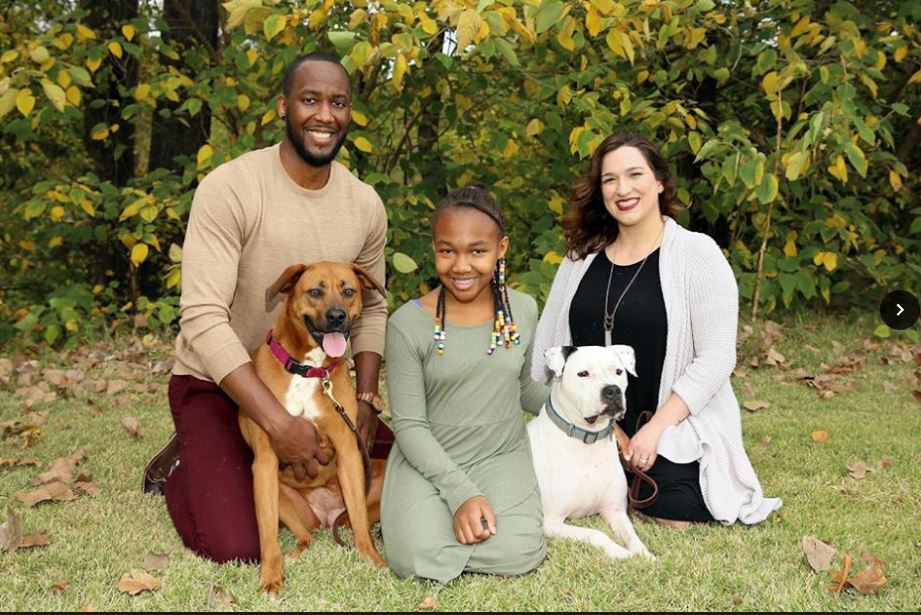 Madeleine Robinson, an ARHS grad and daughter of hall monitor Marc Keenan, owns a pit bull. She is pictured with her husband Richard, stepdaughter Amari, and pets. Photo: Robinson family

Pit bulls, like some other breeds of dog, have gotten a bad rap for a long time.

I found one source that argued that pit bulls contributed to 71 percent of dog related deaths in 2016, killing 22 dogs, and that a pit bull-related death occurs roughly every 17 days. These statistics, plus stereotypes, cause a lot of fear and stigma to surround pit bulls, and as a result, pit bulls are regulated in military housing areas and in over 900 cities.

However, the situation is tricky, since pit bulls are not a distinct breed. Instead, their name is an umbrella term for a group of dogs, much like the word “hound” is used to describe a group of dogs.

Humans are the problem, not the breed, they say. In fact, they add, The American Temperament Test Society rates pit bulls as “friendly” dogs.

Most owners agree and say that their pit bulls are loveable, good dogs.

Ms. Seltzer said she didn’t have a particular dog in mind when she adopted him; she “just wanted a dog who was loving, relaxed, and trainable.”

In George, she found “a total snuggler. He is obsessed with attention from people. He loves being petted,” she said. “He is also a little bit lazy. I usually have to shake him to get him to wake up because he loves to sleep in late.”

George’s favorite activities are cuddling with humans, sitting on Ms. Seltzer’s lap while she plans for her classes, eating anything he can find, and “sniffing random objects on the ground.”

Ms. Seltzer has had George for less than one year. She was a foster parent for Dakin Animal Shelter, and she volunteered to take care of dogs who were having trouble in the shelter and needed to be with a home until they are adopted.

George came to her last spring because he had kennel cough and couldn’t be near other animals.

“I fell in love with him and decided to keep him forever,” said Ms. Seltzer.

George came with some training (sit, stay, come commands and toilet training) but went through an “advanced manners” class at Dakin as well.

“I feel like because of his assumed breed (he looks like a pit bull), George needs to be extra well-trained, because I worry about the assumptions people will make about him,” said Ms. Seltzer.

When asked if she had any reservations before adopting or buying a pitbull she said, “Honestly, I don’t even know if he is a true pit bull. Pit bulls are often misidentified when in reality they could be labs, terriers, or bulldog mixes. I just wanted a dog that was loving, kind, and calm–and he fit the bill!”

According to Ms. Seltzer, George is “only aggressive in the way I’ve seen most dogs be aggressive, like when someone strange like the mail carrier comes to the door, or if he is in a crowded space and someone steps on his tail or foot.”

Also, she added that though she’s “never had another dog of my own, compared to other dogs, George is a lot more affectionate.”

She first met a pitbull when they met a breeder of the dogs named Stephanie and her sister Haley adopted a pit bull named Ginger from Stephanie.

She described Haley’s dog as “the most amazing dog I had ever met. She was loving and happy and cuddly and lazy.”

This inspired her to get a pitbull of her own.

The Robinsons’ pit bull is named Mr. President. “He is the sweetest boy. He loves everyone he ever meets; he loves to make new dog friends and is submissive to every dog he ever meets, despite being a 70 pound dog. He lies right on the ground and rolls over for them to sniff and play with him,” said Robinson.

She also has a second dog named Pumpkin.

“She has some pit bull in her, but she’s more boxer. She is 12.5% American Staffordshire Terrier and is 25% Boxer, plus other bits of things. She’s as much Chow Chow, Rottweiler and Labrador Retriever as she is pit bull. I wouldn’t (and don’t) personally call her a pit bull, but pit bull, in itself, is a loose category.”

However, she said, “Once I met Stephanie’s dogs I was hooked. I was in love. There was no going back!”

Ms. Robinson said she grew up with a Newfoundland and a Shetland Sheepdog.

“I thought Newfoundlands were the best dogs in the world. Newfies are still wonderful, for sure, as are most dogs, but there is nothing quite like a pit bull’s love,” she said.