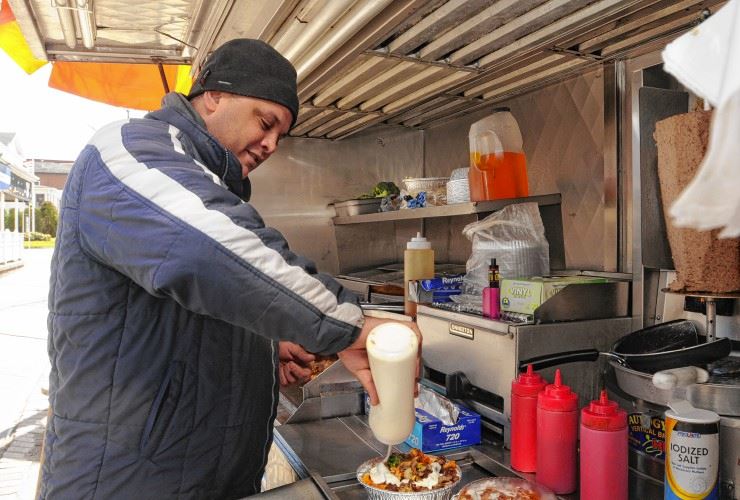 On North Pleasant Street in front of the Unitarian Church lies a hidden gem in plain sight, a gem worth six bucks with the potential to rock one’s world.

Elsayed Fathi, owner of the New York Halal Cart that serves up food in downtown Amherst, came to America in 1994 from his home country Egypt as a 19 year-old teenager looking for work. “I wanted to live the American dream, so I came here I guess,” said Fathi. “I worked in New York for somebody’s cart [and] that’s how I learned to cook.”

The kind of food Fathi cooks is referred to as “American Halal,” a New York street food which is a complex melting pot of Mediterranean and Middle Eastern food.

Halal means permissible in Arabic and, in terms of Islamic guidelines, certain foods like alcohol and pork are not allowed. Meats such as chicken, lamb, and beef are considered halal only when they are slaughtered under Islamic law which require the animal to be healthy and slaughtered  humanely in the name of God.

Fathi’s take on these requirements consists of either of two things: chicken or lamb over rice or in a filled sandwich. Both are generously covered with a secret ingredient white sauce and require an early start from Fathi to prepare for his customers.

“I wake up every morning around 6 o’clock and prepare for the day,” said Fathi. “I cook the rice, restock my cart and head to Amherst. I’m usually set up around 10 or 10:30.”

Fathi operates from a three by eight foot cart complete with a grill, gyro machine, steam table, and a small generator to operate the lights when it gets dark. His customers usually gather around the cart, chat, watch him cook. Fathi tends to know his customers well; while he’s cooking, you can watch him take orders via an earbud from customers that call ahead while, at the same time, cooking and joking with customers in line.

The town has proven to be a great fit for his business.“A friend of mine went to UMass and convinced me to come take a look in Amherst,” said Fathi. “There weren’t any halal food places in town, so I saw an opportunity. Getting my town permit was hard because before me, there weren’t any food trucks in Amherst. I was the first one.”

Since opening in 2012, other trucks and carts have attempted to establish themselves in Amherst, but the many food opportunities in town have made it tough. “A Chinese food truck opened, but the problem is that there are like six Chinese restaurant in town,” said Fathi. “How can they survive?”

He also attributes his success to his mobility. “I don’t have to pay high rents when the university is closed,” said Fathi. “I keep my costs down and choose not to come during winter break when weather is rough and business is low.”

His success isn’t just smart economics and good food, though. His cart, though small, has created a sense of community in town as well. Fathi’s cart is a popular hangout spot for the UMass Muslim Student Association (MSA).

Most Fridays, after the Friday prayer, MSA members tend to hangout by Fathi’s cart and celebrate the end of the week.

“The food is delicious; it’s the best value, and he’s a very fun and nice guy. You can talk to him and he makes food in front of you,” said Talha Khan, a sophomore at UMass. “My family is from Pakistan, and I grew up eating biryani which is a very special dish, since I am not close to home. This is the closest thing to biryani that I can find.”

Tauqeer Hassan, a student of Pakistani origin who attends Holyoke Community College, is a regular customer of Fathi and a big fan of his food. “The food is great. I simply love it, the white sauce is bomb,” said Hassan. “I’m studying business in college and honestly there’s a lot to learn from Fathi, most importantly the great customer service he provides.”

Fathi, even though he is in  direct competition with other restaurants in downtown Amherst, doesn’t have to pay as many expenses as a restaurant would. According to the Town of Amherst lunch cart permit application, Fathi pays an annual fee of $125, which puts Fathi’s cost lower than any dine in or takeout place in downtown Amherst.

And while the menu has traditional roots, Fathi says it was created more out of need. “This is not really Egyptian street food, it’s a New York invention,” said Fathi, acknowledging the style of street food that was popularized in New York in the early ‘90s by two partners, when a growing number of Muslim workers looking for halal food resulted in carts popping up throughout the streets of NYC.

The first ever “American halal” cart was founded when two Egyptian immigrants opened up a hot dog stand on 53rd Street and Sixth Avenue, and soon realized the potential for halal street food which lead them to introduce meals with meat, pita, and rice, and hence gave birth to “the halal food culture” or “American halal.”

The business still exists at their original location but also has franchises throughout the city and now globally. ”The Halal guys” as they like to call themselves,  have been so popular that to purchase a single meal, one has to wait at least 30-40 minutes in long lines.

I personally have been a regular customer since the last two years and the reason that makes me want to go back to him again and again is the quality of the food and the customer service.

After my second or third visit, Fathi knew that I didn’t like salad in my rice of gyro, and he also knew what sauces I preferred on my food. As a consumer, I value businesses that value me.

In my two years of regularly visiting Fathi, he has never counted the money I have paid him. If I give him perfect change, he grabs it and puts in the register without counting, and if I’m supposed to get change, all he asks is “How much you gave me?”

The amount of trust that he puts in his customers might be dangerous at times but overall, he gains his customers’ trust and builds long term partnerships.

Hassan referred to his first encounter with Fathi,  saying, “I had a friend and he would brag about Elsayed all the time, so I tried it once and I can officially say I’m hooked.”

Hassan also talked about Fathi’s customer service. “He knows how much white sauce I like on my rice or sandwich. He probably knew it the third time I bought food from him,” he said.