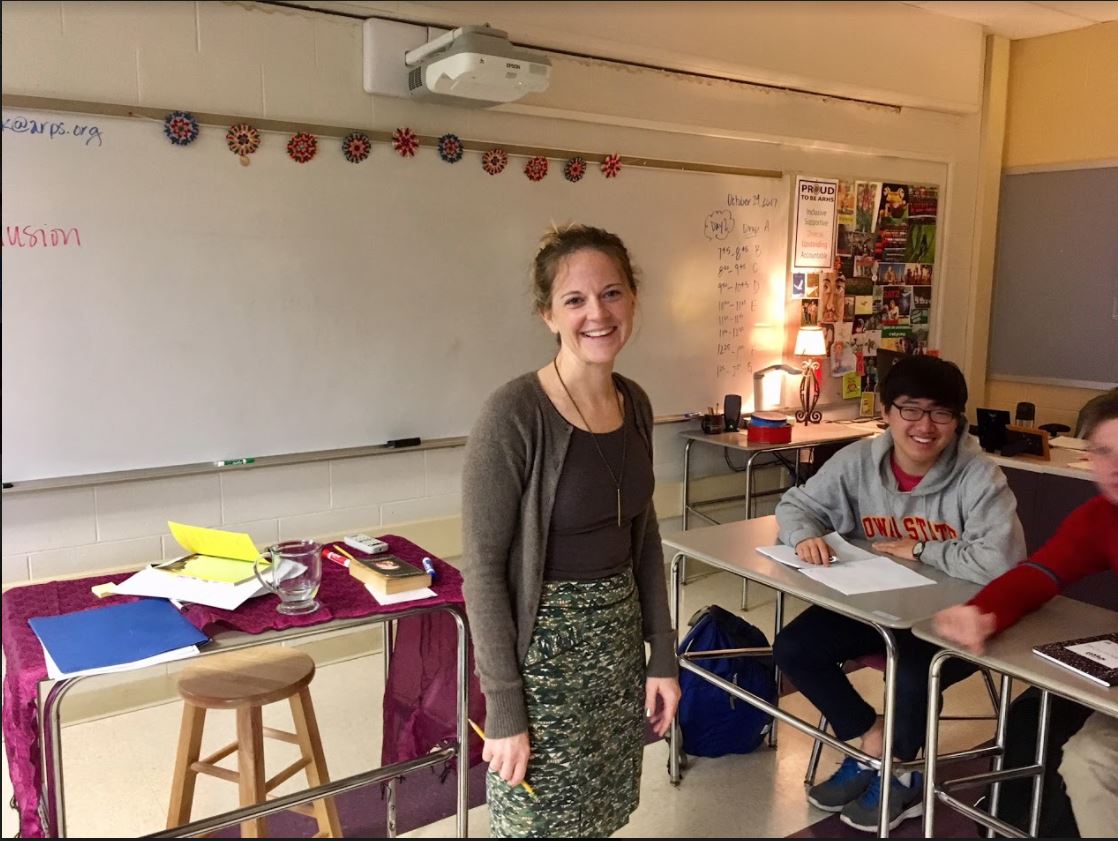 English teacher Ms. Kuhn can walk from her house to school in under 10 minutes. Photo: Sara Barber-Just

My job at the high school is doing 75 things at once. That’s what it feels like to be a teacher,” said Kate Kuhn, a new English teacher at ARHS. Ms. Kuhn was hired last year as an interim English teacher to fill the shoes of a mid-year resignation, and she was hired for the full-time slot in June.

One of the reasons Ms. Kuhn was thrilled to land the job was the high school’s close proximity to her house. “I can walk from my house and be at my desk in seven minutes,” she said. Ms. Kuhn also applied to work at ARHS because “teaching at public school is good way to participate in community.”

Ms. Kuhn teaches tenth, eleventh, and twelfth grade students to be excited and think creatively about their writing. She likes all her classes but her favorite subject is Contemporary Literature and Multicultural Identity, because it has “amazing books.”

Ms. Kuhn is passionate about the learning process. “When a lesson goes well, of course that’s amazing. But if it doesn’t go well I love tweaking it and working on it the next day with the students.” She likes hearing students interpret literature and writing about it because “there are so many ways people process things and can explain things.”

Ms. Kuhn has been interested in books and English since high school. However, she first became interested in teaching when she took the job as an assistant coach for a girls’ high school lacrosse team before graduate school.

“I played lacrosse in college and I missed it in graduate school, so I took on the job in Vermont as an assistant coach,” she said, “When you coach someone and then they get what you’re saying and they do it, it’s like an a-ha moment. It’s an addictive feeling.”

Before Ms. Kuhn knew she wanted to become a teacher she had a dream of doing a different job. “You know after a horse wins at the Kentucky Derby, there’s that woman that gets to ride a horse around and interview the riders? That’s the job I wanted to have,” she said. “Between you and me, that’s still my dream job.”

Needless to say, there are many activities outside of teaching that Ms. Kuhn enjoys. She spends most of her free time having fun with her five year old, Anna, and her two year old, Brooks, but she also enjoys taking hikes.

“I love just leaving everything else behind and getting lost in the process,” Ms. Kuhn said, “and then, there is always a view at the top.”

Naturally her ideal weekend would include some hiking, some alone time, spending time at home with her kids, and then having a date night with her husband, Noah. “We’d borrow someone else’s dog for the hike,” she said.

Having kids had a huge impact on Ms. Kuhn’s life. Her children have made her a better teacher and a more empathetic person.

“Parenting changed how committed I am to being a good person,” she said. “I didn’t like water much before. But when my daughter was three I jumped off something tall into water just to show my daughter that I was brave and she could be too.”