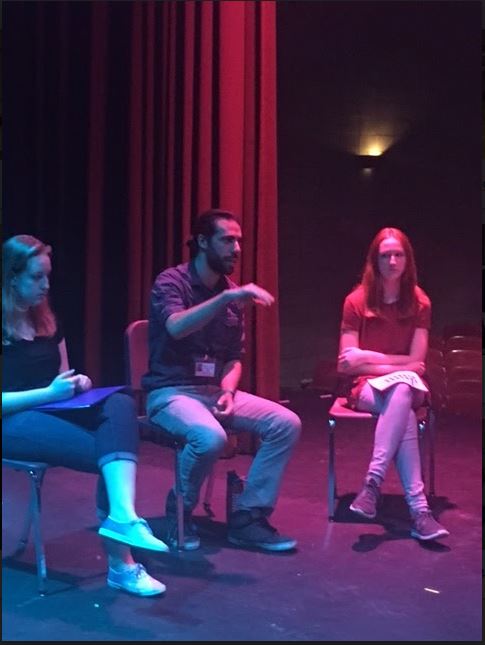 Nate Mondschein is enjoying his time filling in for one semester for performing arts teacher and department head, John Bechtold, who is currently on sabbatical in England.

Mr. Mondschein, who usually goes by Mr. M, said he is currently teaching Acting 1 and Stagecraft. He also teaches Intro to Music at the middle school.

“There is a level of independence [at the high school]. It’s more of hands off teaching. Students have more of an ability to take an idea and run with it. Students can do their own thing. My favorite type of teaching is where you can go with the flow and improvise,” he said.

As an ARHS alum himself, Mr. Mondschein is very excited to be back.“I went through ARPS from eighth grade on, and I had a really good experience for the most part,” said Mr. Mondschein.

He graduated from Wesleyan University with a dual degree in music and government. He also spent a lot of time doing creative writing and poetry in college.

Mr. Mondschein spent the summers of his college years teaching at Deerfield Academy Summer Arts Camp. When he was younger, he was a camper at DASAC.

When he graduated from college, he went right into teaching at the elementary school level in Connecticut, then taught privately in New York.

Eventually he wanted to get back into the school system and he really wanted to work in Amherst.

He said he likes being in a setting where he can engage with a subject that he loves and be around a group of people “who are down to kick the subject around.”

Mr. Mondschein said he has had formative experiences with teachers, good and bad.“They have really shaped me,” he said. “It’s a rewarding feeling getting to be apart of someone else’s story in, hopefully, a positive way.”

He values “space for open dialogue about issues in the world.” The theater program at ARHS was a core part of who he was in high school.

Mr. Mondschein took acting classes, was in the musical, and wrote a musical when he was a senior.

“It was a wonderful [form] of self expression,” he said. “Bech was huge part of what made it so people could pursue their own interests in the field of theater.”

He said he had a foot in the teachers’ world but then when the position opened up at ARHS, he wanted to apply.

“Theater is a medium that allows for self-discovery and personal awareness even though we are putting on different faces,” he said. “That is probably my favorite thing.”