From Rao’s to the classroom 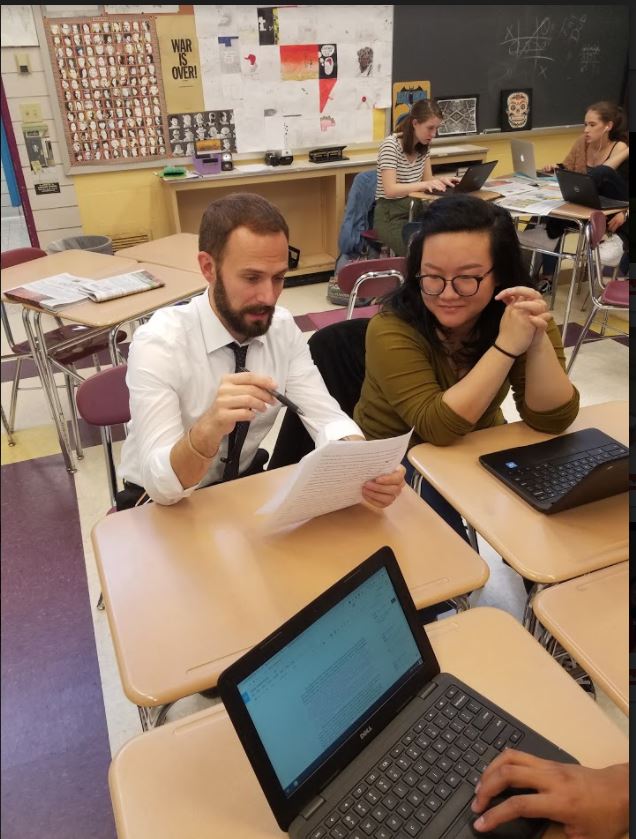 While it is Mr. Despres’s first time as a classroom teacher here, it is not his first experience with the ARHS community. “I started [here] in 2006 as a paraprofessional in a student support program and left in March of 2008,” he said.

After that, Mr. Despres took a full-time teaching job at Revere High School in Mass., which he held for six years before moving back to Western Mass. to teach at Pioneer Valley Regional School in Northfield.

“My role [at ARHS] is totally different now [than years ago],” said Mr. Despres. “When I was here before, I worked with one student primarily. I have a much wider view of the school community now.”

Mr. Despres was born and raised in Saugus, Mass. and lived with his parents and younger brother Joseph.

He moved to Amherst in 1998 to attend UMass to do his undergraduate degree in journalism before moving back to Eastern Mass. to get his master of arts in teaching, in secondary English education.

Helping people is among Mr. Despres’s greatest loves and a big reason why he decided to become a teacher.

“I was in the English department at UMass and had this love of literature, had this love of newspapers, reporting, and the media,” said Mr. Despres. “But then within those jobs I really loved the helping and teaching components.”

After his graduation from UMass and before teaching, Mr. Despres was working as a freelance writer/photographer for a regional music magazine, and he was a baker at Rao’s.

While he eventually traded in his baker’s apron for a suit and tie, his legacy at Rao’s lingered on for some time with a dessert named after him: the “Almond Despres” (a shortbread-based cookie topped with dark chocolate ganache and a single almond).

Mr. Despres has been married for eight years to his wife Marykate Smith Despres.”We met at Rao’s as bakers. “They hired her to replace me and we’ve kinda been stuck together ever since,” he said.

He now lives with her and their five-year-old daughter Celia in Greenfield, Mass.

They also have a dog, a cat, chickens, and a 32 year old pet turtle named Albert that Mr. Despres has had since he was five years old.

During his weekends Mr. Despres says he spends time playing guitar and listening to music. “I’ve been playing on and off since high-school,” he said. He also dabbles in photography and reads comic books and graphic novels.

One of Mr. Despres’s biggest artistic and general influences is Yoko Ono. He has a huge admiration for artists who “never went with stuff just to go with stuff. [Ono] makes things that aren’t compromised by other people’s visions of what she should make,” he said, “and yet she is a generous collaborator and her work is inclusive, participatory. I think we can all learn from that example.”