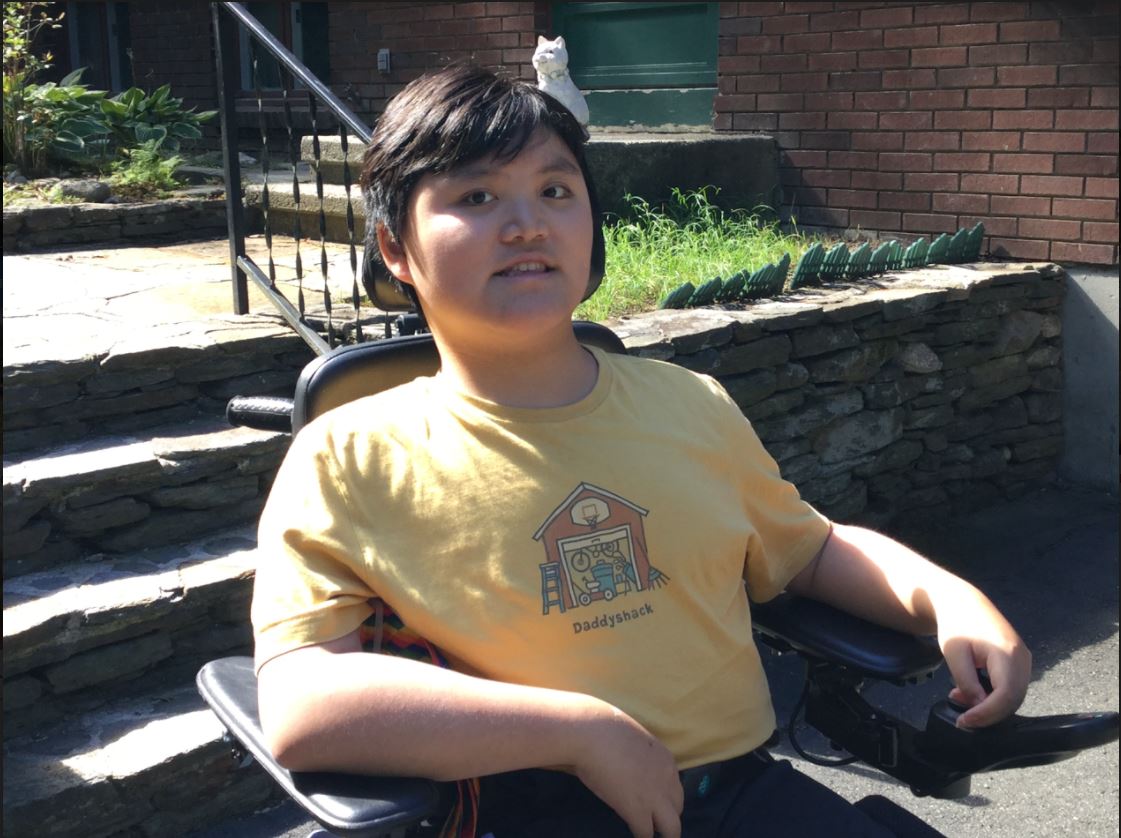 Justin’s friends and family will miss the inspirational teenager.Photo: courtesy of Jen-Yi Wang

Justin Xiong, a sophomore at ARHS, passed away on the morning of August 10 at Baystate Medical Center.

In the time since, his loving family has been celebrating the passion and purpose he brought to a brave life, full of curiosity for his world.

“He let me experience a different kind of meaning of life, and that is beyond my imagination.”

Justin was diagnosed with Duchenne Muscular Dystrophy (DMD), a rare genetic muscle disorder, at the age of five.

Although the disorder placed physical limitations on Justin’s life, he never let them get in the way of his positive outlook, many hobbies, and rigorous approach to academics.

Ms. Wang said that while the reality of her son’s diagnosis over the last ten years had prepared her for this moment, Justin himself was “very brave” and never complained.

Justin’s paraeducator, Kamran Skelton-Edwards, said that Justin “took his condition and rolled with it stronger than anyone I know could have.”

Justin’s brother, Austin Xiong, said that Justin had no jealousy and “just did the best with his situation and was quite happy with it, too.”

In a speech given at Justin’s memorial service, Austin talked about his brother’s great curiosity about everything from lamp poles to traveling.

At the age of 10, Justin developed a devotion to drawing and filled up many sketchbooks with cats, cities, and, as Austin mentions, electric poles.

From a love of eating delicious food sprang his joy for cooking. “He found countless recipes for me to try,” said Ms. Wang, and enjoyed shopping for ingredients at Whole Foods.

Although he could not do the cooking himself, Ms. Wang spoke about the many adventurous foods they tried “after watching Chopped.”

Traveling was a “highlight of his life” and Justin, alongside his family, visited many places: Taiwan, the Caribbean, a road trip to Florida, San Francisco, the Alaskan glaciers, Fermilab in Chicago, and others.

His family recalls a time when they were planning a trip to the Grand Canyon and Justin’s godmother called to reserve a van, only to find that a twelve-year-old “Mr. Justin Xiong” had already scheduled one.

Besides drawing, cooking, and travelling, Justin and his brother would often play video games at home.

Mr. Skelton-Edwards also commented that although he thought he was quite good at Wii, Justin “used to whoop my butt.”

Austin and Justin started with Club Penguin and eventually evolved to Wii games, iPad games, and some war games as fun alternatives to the many hours Justin spent on academics.

A large part of Justin’s life was devoted to his studies. Ms. Wang said that “[Justin] was very competitive [with] himself” in all aspects of school.

Junior Faizan Hassan conveyed that “he was quiet in class, but when he spoke it was calculated and clearly showed his intellect.”

Justin was especially fascinated with many aspects of chemistry.

Chemistry teacher Sharon Palmer remembers worrying that she might scare Justin and Austin off when they first visited ARHS by talking about quantum mechanics.

However, to her surprise and delight, the next year, now a student of Ms. Palmer’s, Justin instead expressed his excitement.

“He said he had been waiting all year for this,” said Ms. Palmer. “That’s the only student that I’ve ever taught who would’ve said that about that topic because its really confusing.”

Justin received a perfect score on his chemistry SAT. He was “as cool as a cucumber” about it, said Ms. Wang, and the only student that the science department can remember ever doing so.

“He would wake up around 7:30 a.m. on weekends, sit up in bed and just start studying for about two hours,” said Austin. “He would have breakfast and keep going. He really put his mindset into just studying for the test.”

This also led Justin to a general SAT score just 30 points short of perfect, a feat Austin has yet to see any of his friends equal.

Justin was not only a caring student, but a caring teacher too. Senior Abigail Morris said she “probably would’ve failed pre-calc” if she wasn’t sitting next to him. “He was super good at teaching,” she said.

Austin spoke about how Justin “always wanted me to succeed, even if I did take up a lot of his time. In fact, [he] would be really upset if I was frustrated with myself and just gave up.”

Justin’s memorial service was held at Douglas Funeral Home in downtown Amherst, where over 200 of Justin’s family, friends, and teachers gathered to celebrate his life.

There were numerous stories and memories shared by many in attendance.

“It’s not easy to live with not being able to walk,” said Austin. “His outlook was a testimony to his strength.”

Justin changed the lives of his family and was an inspiration to many students and teachers throughout ARHS.

In a life full of passion and purpose, Ms. Wang says she has been overwhelmed to learn of the number of lives that Justin impacted.

“He lived in the moment, appreciated what he had,” said Ms. Wang, “and everyone needs to learn that.”