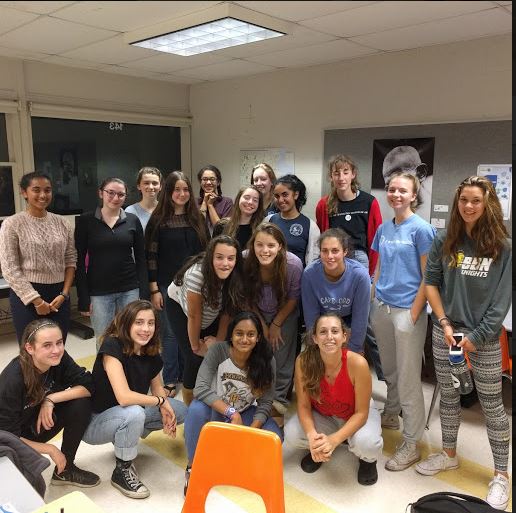 As technology progresses, employers in all types of fields are demanding more workers who have tech skills and experience.

Last year, Narayanan won the Aspirations in Computing Award, and when she went to receive it, she was the only girl there from all of Western Massachusetts.

The award is from an organization called the National Center for Women in Information Technology which has a grant program.

It is funded by major companies like Apple and gives money to female students who want to teach a science or tech class. So Narayanan decided to create a class teaching basic coding skills for female students.

As a gifted academic female student interested in STEM, Narayanan often finds herself one of a few, or the only girl, in a class.

“You feel like an ambassador, because you’re like, ‘if I can’t prove to all these guys that I’m super smart, then they’re gonna think that all girls are not good at computer science,’” Narayanan explained.

In the class, held every Monday night in technology teacher Ned Young’s room at 7 p.m, the girls work with a coding language called Python. “I’ve learned a lot about how Python works and how its programs can be applied to everyday life,” said freshman class member Shreya Venkataraman.

The nature of the peer-taught class interests students in a way the regular classes sometimes can’t. “I think that learning from peers is a rare but very valuable opportunity. It felt a lot less intimidating than signing up for a course taught by a professor at one of the colleges or something,” said senior Catherine Larson.

“Each class, there’s a new topic or basic thing you need to know about computer programming. We read a bunch and we see examples and at the end Neosha has this final mini problem that we have to code. A lot about donuts and taxes,” said senior Augusta Fricke.

Students are finding they can use these skills in all different aspects of their lives.

“One of the coolest things about computer science is that it can pretty much be applied to any field,” said Larson. “Whatever career you’re considering, there is most likely some aspect of it that involves computer science.”

Each student may not necessarily go on to a career in this field, but there are many life lessons this unique class offers.

“It requires a lot of perseverance, like getting back up after your program fails and having the courage to say ‘you know, this failed but I’ll figure it out,” Narayanan said.

Most students spoke about the UMass student, Cassie Corey, Narayanan brought in to talk about her experience.

“Through listening to a female computer science graduate student’s life story, I have learned that in order to succeed as a woman in a STEM field, like computer science, I need to be assertive and confident in order to be able to block out a lot of the prejudice that exists against women in those male-dominated fields,” said senior Aviva Weinbaum.

The all-female restriction was highly important to the class. Narayanan was excited to give girls a chance to escape those situations where they are surrounded by boys, and instead to provide a place where they have a chance to feel more comfortable, to talk openly amongst themselves about these issues.

Until this problem is fixed, spaces where girls can learn about STEM without the stress and pressure of being alone, surrounded by boys, are necessary.

Narayanan took a bold step and made something truly special for our school community.

“There’s so much talent girls have, and they’re just as smart as boys, but the only thing limiting them is thinking that they can’t do it,” she said.