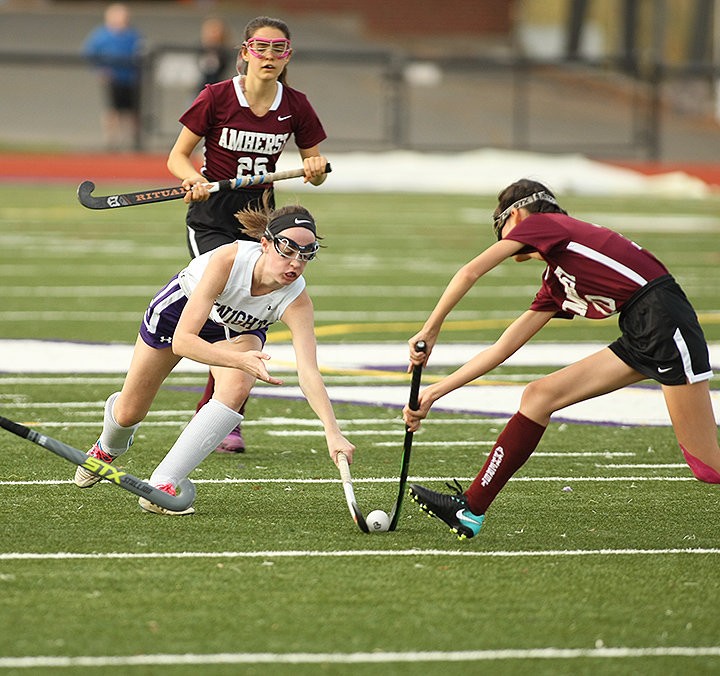 By making the postseason and winning their first game since the 2014 season, the girls’ field hockey team made history.

“I think we accomplished our goal of winning a game,” said senior and co-captain Lindsey Campbell. She said their goal was “to make it to postseason,” and after they surpassed that goal, they followed it up with a strong few wins to end the regular season.

Last year, the varsity field hockey team’s record was 0-17. Their goal for this season was “to score as much as possible.”

Winning their first league game on September 19, the team sky-rocketed into the playoffs mindset.

However, they still stayed focused and worked hard to accomplish a successful end.

A few weeks later, they won another league game to tie up their spot in postseason.

“We had to remind ourselves and each other of why our goals were important and the steps we needed to take to accomplish them,” said co-captain Rachel Kawall, about achieving the team’s personal goals. “Our team has worked extremely hard and the results we’ve got show that.”

“I would say my job as captain is to motivate, and keep the team bonded and keep people on track and focused,” said Campbell.

The team’s head coach, Michelle Risch, was also a very positive motivator for the team.

“One of my go-to phrases is this is a marathon, not a sprint,” said Risch. “We have a lot of growing to do. This takes time.”

The team met every Monday through Friday, from 3:30-5:15pm on the field hockey field behind the track.

A typical practice consisted of a warm-up, stretching, stick skills, conditioning, and the occasional scrimmage.

And their team dynamic stayed strong throughout the 2017 season.

“We care about winning. However it really is not what’s most important,” said Risch. “We are good and getting better. We like to laugh, be silly and have fun. The coach is not always right and these student athletes have a voice.”

To bond outside of practice, the team held dinners, bonfires, and sleepovers. The bus to away games was also a central part to bringing the team together.

Campbell remarked, “blasting High School Musical jams,” was one of their favorite activities on the bus.