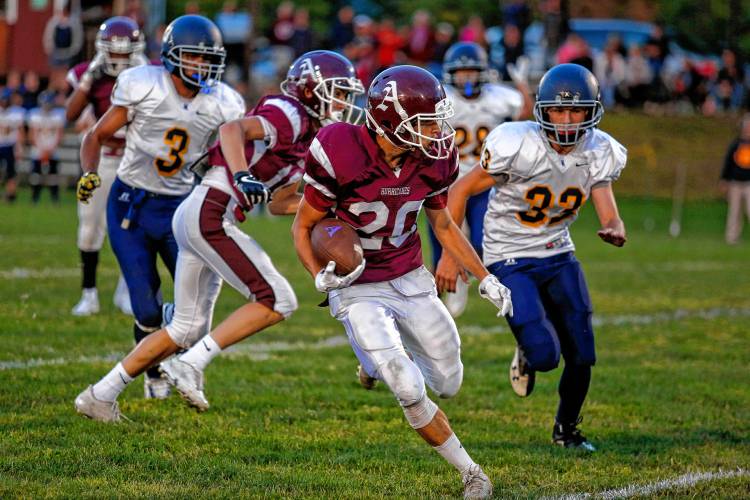 This year’s football team had one of its best seasons in quite a while with six wins and three losses in late October. They won against Monument Mountain, Ludlow, Drury, Woodstock Academy, and Belchertown, and advanced to the Western Mass. Division V semi-final game.

Special education teacher and social studies co-teacher Stuart Handel is the offensive coordinator for the football team and he shared his thoughts on this year’s team.

Handel is one of five coaches on the team which include head coach Chris Ehorn, assistant coach Noah Lamb, special teams coordinator Doug Slaughter, and running back and defensive back coach Tom Crossman.

Coach Handel said there were currently 45 practicing members of the team. Captains are Ty Loper, Leo Kahan, and Juan Ross-Perkins.

This year the team had “very positive growth at practice” in terms of people who show up. According to Handel he saw a lot more dedication this year than past seasons.

Handel said that the team had many goals this season. “We needed to ‘win the next game,’ to prove that we were actually competitive this year,” he said. “We needed to beat teams who had winning records to make the playoffs and possibly win the league.”

Handel also said that another one of the team’s goals was to hit the six win mark, which they did, showing real improvement from last year, when they went 4-7.

One of the team’s keys to success was their offensive line. “The offensive line was very strong this year. We ran the ball about 75 percent of the time,” said Handel.

Community support is important to Handel. “We only do as good or as bad as how much of the community coming to the games,” he said. “If more people come, we will do better.”

When asking Handel what makes him want to coach football and what keeps him doing it, he said he loves the team aspect of football. “It needs to be everyone to be good,” he said. “The strategy aspect and complexity of play is important.”

Something that was also important to Handel was the attitude of the team and how serious they were about improving. “We had growth off the field, acted like responsible people and took things seriously,” said Handel.