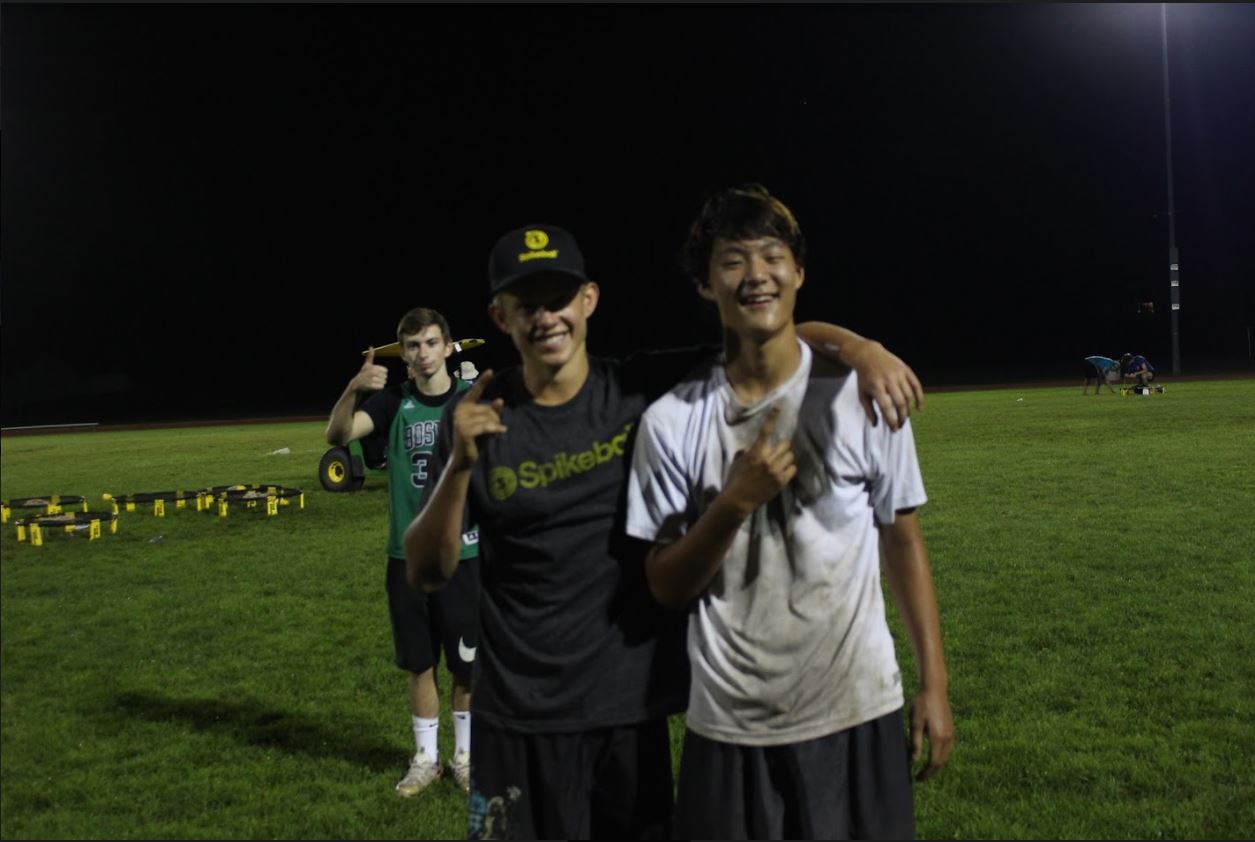 Newly elected senior class president Peter Treyz, in an attempt to prove he is “not all talk,” brought the first ever Spikeball tournament to ARHS on September 27.

Sixty students participated in the tournament, a fundraiser for the senior class, which took place under the lights at 7 p.m. on the soccer field.

While most attendees were participants, spectators could be found scattered between games, cheering for their favorites, and heckling the opposition.

While almost everyone on the field was a high school student, parents looked on leisurely from behind the fence.

Music permeated the fall night, but was intermittently interrupted by Declan Gray-Mullen’s voice, announcing the schedule of the following matches.

Although Spikeball may be a popular beach game among college students, it is rarely played competitively or in large numbers, as ARHS witnessed in the weeks leading up to the event. “Spikeball had become a fad around school,” said Treyz, when asked why he chose the uncommon sport.

Spikeball is a two versus two game played around a circular net with a diameter of three feet.

It is essentially volleyball except the ball is half the size and bounced off the ground. Each team has up to three touches on the ball before hitting it off the net to the opposing team.

If they are unable to return it off the net, they concede a point. The game is played until a team reaches 11 points, with a lead of at least two points.

Treyz formed the bracket based on his rankings of teams. Teams were distributed so that the supposedly best teams would not be paired against each other in the first round.

Ammar Abdel Maksoud, who played with Sam Brainin, said he felt “cheated” and “disrespected” after losing all three games.

“They were terrible,” said Liam Felton, a junior spectator of Abdel Maksoud and Brainin’s team. “I wasn’t even sure they were playing Spikeball.”

The top two teams in the group stages, which consisted of four teams all playing one another once, proceeded to the following round of elimination. Zaim Elkalai and Reece Nelson faced off against Treyz and James Cairn in the final round, where the latter won 14 to 12.

To this, Treyz replied, “The tournament was designed to allow the best team to win and if anyone disagrees, play me in Spikeball.” Caleb Seamon, a senior contestant who lost in the semi-finals, admitted “they won fair and square.”

Altogether, the tournament raised $380 for the class of 2018. The top four teams won prizes amounting to $400. The first place team won prizes that amounted to well over the $50 promise in the morning announcements.

Prizes included gift certificates from local business as well as a t-shirts, hats, and a Spikeball pro set, all donated from the Spikeball company upon receiving an email from Treyz asking for donations.