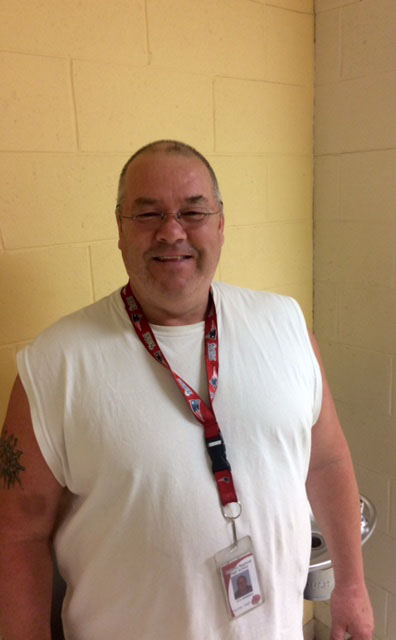 Wearing his signature sleeveless tee shirt and a kind smile, retiring custodian Stu Kinsman looked back on his time as a member of the ARHS maintenance staff. He described his 21 years of working as a custodian with a gentle laugh and a subtle humour that has made him a well-loved member of the staff.

Kinsman grew up in Gardiner, Maine where he attended Gardiner Area High School. He was a motivated and hardworking person from early in his life.

“I actually graduated as a junior with honors,” he said. “I worked at McDonalds and earned credit that way.”

After high school, Kinsman held a variety of jobs, from a truck driver for a beer, wine, and tobacco company to a store security official.

“I was a store detective for years. That was my favorite job,” he said. “It was so much fun. There were cameras and everything. We caught crooked employees and shoplifters!”

Kinsman then went into business with his sister who owned a boutique shop in Connecticut. When his sister built another store in Hadley, Kinsman moved to the area to manage it about 30 years ago.

Kinsman settled down in the Pioneer Valley for good when he met his wife, Deborah. “My wife walked in as a customer one day and eventually we started dating. That’s really why I stayed in the area,” said Kinsman.

He and Deborah have now been married for 34 years and have three grown children and seven grandchildren. Four of their grandchildren live next door and Kinsman loves to take them water skiing, boating, fishing, and RVing on the weekend.

Twenty-one years ago, Kinsman began his experience as a custodian for the Amherst public schools.

“I started working here for the pay and benefits,” he said. “What kept me here was the great working environment, staff, and the professionalism. And the kids. Love the kids.”

Kinsman especially connected with the students at the South East campus of the high school, where he got to know students on a more personal level.

Working as a custodian at a high school has impacted Kinsman’s life in subtle but important ways, and he does not take it for granted.

“I didn’t go to school after high school. For me, without [higher] education, this is the best paying, most fulfilling job I’m going to get,” he said. “It has allowed me to have a very good honest living, personally and financially. It’s a good secure job if you do your job. I have learned that being decent and respectful goes a long way.”

Kinsman has also enjoyed being a part of the community at ARHS and values and admires the work of his peers.  “[The custodial staff is] supported by the maintenance staff- electricians, plumbers, and bus drivers,” he said. “I especially want to recognize Ron Bohonowicz [Director of Facilities and Maintenance for ARPS]. He has been so supportive and has worked to go after grants to enable us to be a good safe school system.”

Working as a custodian has also had its challenges; however, Kinsman understands that it comes with the job.  “[There are] destructive people who fling food, people who put apples down the toilet. It’s time consuming to deal with that especially since we’re short-staffed,” said Kinsman.

He also believes that having a good relationship with his boss is very important. “If your boss retires, you can get the principal from hell,” said Kinsman.

Outside of his custodial work, Kinsman is a talented self-taught car mechanic.

He keeps his own cars well-maintained and in excellent working order, and does the mechanics on his mother-in-law’s and sister-in-law’s vehicles. Kinsman also uses his skills on fixing up antique cars, which he collects and restores for fun.

When he retires, Kinsman plans on relaxing and taking advantage of his free time with his various hobbies and spending time with his family. “I’ll putter around my house and sell vinyl records at flea markets,” said Kinsman.