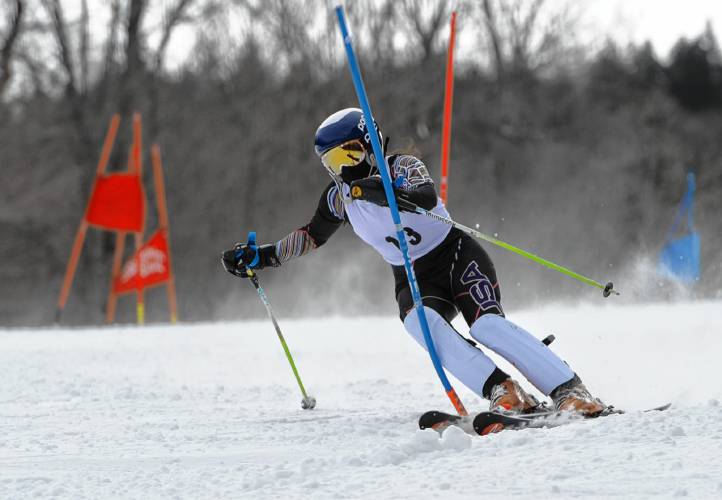 A severe lack of snow didn’t stop either the Alpine Ski Team or the Nordic Ski Team from making great progress this past season.

The Alpine Team sent six people to States, more than in the last five seasons. At States, the Nordic team finished in eighth place for boys and 11th for girls.

Steven Kalt, Nordic Skiing Head Coach, has his reasons for his team’s placement at States.

“At the States race, poor conditions misaligned with our wax and denied our boys team the podium,” said Kalt. In the event, the boys placed fourth.

This season, the Nordic Team worked on making itself stronger. “We lost a lot of top skiers last year, so there were a lot of places we had to work to fill,” said captain Kendal Pittman.

Nordic Team captains are partly responsible for finding skiers to join the team. “Captains are our chief recruiters.  We’re losing many experienced skiers to graduation, and are looking for skiers to fill their places,” said Kalt.

Pittman is proud of how much progress the team, especially the new skiers, made this season. “We only had two weeks of practice on snow this year, which was really tough,” Pittman said, “but they all made incredible progress and that was amazing to see.”

The lack of snow was also an issue for the Alpine Team. “The weather provided us with a great deal of frustration as many of the practices were cancelled,” said varsity Alpine Ski Coach Peter Vamosy.

In the past, the Alpine Team used to be small. For this reason, the team also included middle schoolers. “This year we have a much larger team including six middle schoolers,” said captain Margaret O’Connell.

This year was Vamosy’s first season as a coach for the Alpine Team. “I am new to the sport and am thankful to have had the guidance and assistance of the former coach, Pepe Torras, throughout the season,” said Vamosy.

Vamosy has done a good job as coach, according to O’Connell. “He ended up exceeding expectations of a coach filled with encouragement, helpful advice and admirable organization skills,” she said.

According to O’Connell, Alpine Skiing is relaxing. “It’s nice how it is an individual sport so there is no pressure to do well,” said O’Connell. “My goal next year is to become more aggressive instead of holding back to finish for points.”

Pittman likes the openness of the Nordic team since anyone can join. “No tryouts required! Almost everybody who joins the team has never skied before,” Pittman said. “We’re a super friendly team and always looking for new members, so come try out Nordic skiing.”

The Alpine Ski Team, on the other hand, requires that skiers be either intermediate or advanced when they join the team. “[While skiiers need to be skilled,] no previous race experience is required to join the Alpine Team,” Vamosy said.

“Everyone on the team has a great attitude which makes things so much better,” added O’Connell.

Overall, this past season was a good one. “I wanted to have a fun last year on the team, and that goal was definitely met,” said Pittman.

Next season, O’Connell said that she wants to “keep doing what I’m doing. I try to improve whenever I can.”